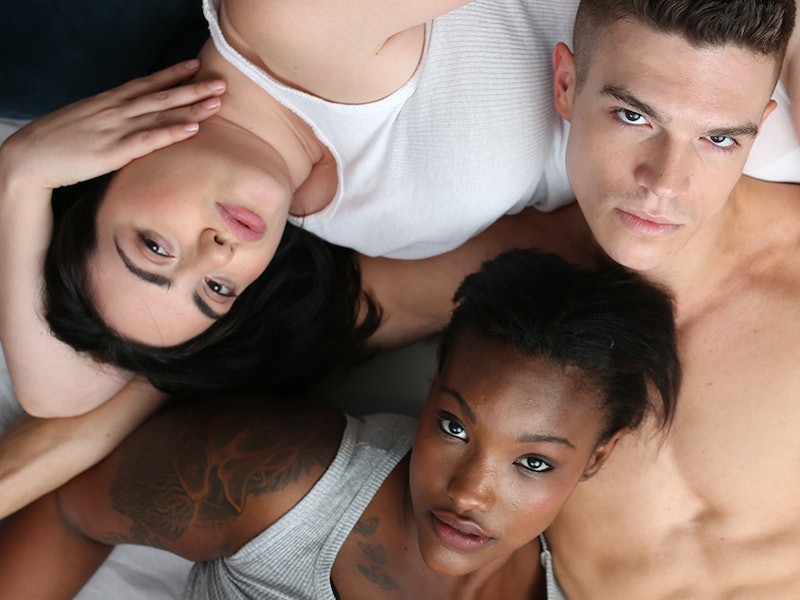 We’re always hearing that we could be having better sex, a better orgasm, or a better relationship. But how often do we hear the nitty-gritty of how we can actually better understand our deepest desires and most embarrassing questions? Bustle has enlisted Vanessa Marin, a licensed sex psychotherapist based in San Francisco, to help us out with the details. No gender, sexual orientation, or question is off limits, and all questions will remain anonymous.

Q: My boyfriend and I have been together for about 3 ½ years and things have been a little rocky over the last few months. We haven’t been having sex as frequently, so he recently brought up the idea of opening up our relationship. I really love him and don’t want to lose him, but I’m not sure how I feel about him being with other women. What should I do?

A: In the last few years of my sex therapy practice, I have seen more and more couples who are interested in opening up their relationships. Non-monogamy is being discussed, ahem, openly in our society, and becoming an option that more people are considering.

The most important point that your question brings up for me is the fact that we all need to consciously choose the relationship model that works best for us. Most of us default to monogamy, since it’s the standard in our culture. But just because something is the norm doesn’t mean it’s right for everyone. It’s great that you and your boyfriend are starting to examine what each of you wants for your relationship.

To help you and your boyfriend decide if opening things up is a good choice, I’ve compiled the Dos and Don’ts of non-monogamy:

There are a number of different types of non-monogamy — poly, open relationships, swinging, circles, guest appearances, and more. You want to make sure you and your boyfriend have the same understanding of what “open” means.

Do Consider your motivations

Don’t open up your relationship because you’re fighting

Non-monogamy won’t fix the problems you’re having with your boyfriend. It requires great communication, mutual respect, and teamwork, all of which are exceedingly difficult if you’re arguing with each other all the time.

Read The Ethical Slut or Opening Up: A Guide to Creating and Sustaining Open Relationships , both of which are great primers on non-monogamy. Not everyone’s experiences are the same, but learning about some of the common dynamics that may pop up, and discussing them together, will help you be better prepared.

Do walk through some what-if scenarios, separately and together

What if your boyfriend falls in love? What if you get overwhelmingly jealous? What if you find hook-up partners right away, but he doesn’t? You don’t need to overanalyze every little detail, but it’s good to have an idea of how you might react.

I’ve seen some people use open relationships in the same way. Break-ups are one of the most painful experiences we go through, but don’t delay the inevitable by using “let’s open things up” as an excuse. It’s cruel to your partner, and it’s disrespectful to those for whom non-monogamy is a chosen way of life.

Do get really clear on your boundaries

Non-monogamy can be complex, and you and your boyfriend should nail down your guidelines before hooking up with anyone else. Some questions to consider: Is dating allowed too, or just hook-ups? Are any particular sexual behaviors off-limits? How will you protect yourselves against pregnancy and STDs? Do you want to know when your boyfriend is hooking up with someone? Or who they’re hooking up with? Do you get veto power over certain partners?

Do start with baby steps, and consider a trial period

Agree to try going on a date with someone new, or making out without going any further. See what those little steps bring up for both of you. The tricky thing with non-monogamy is that once you’ve hooked up with someone new, there’s no taking it back. That being said, you may find it useful to make an agreement to open your relationship for a few months, then re-evaluate your rules. Know that it’s always your right to change your mind.

While being intimate with other partners may end up getting you hot and bothered (jealousy can do that for some people), you shouldn’t rely on it to resuscitate a waning sex life. You and your boyfriend should actively work on improving your sexual connection before starting to think about non-monogamy.

Go out to dinner with a friend, schedule a therapy session, or write in a journal. You're going to need backup.

Do communicate with your partner frequently

Have regular check-ins, and talk about how things are going. Regardless of how carefully you plan or how considerate you are, feelings are going to get stirred up. The more space you give to your reactions, the quicker the feelings will pass.

Being in an open relationship isn’t a license to be a jerk. Don't break the rules you set.

What caught my attention about your question is that it seems like your boyfriend may be interested in opening things up because the two of you have been fighting and not having sex as frequently. It also sounds like non-monogamy is not necessarily something that appeals to you. I would suggest that you and your boyfriend put some work into getting your relationship back on track first, then return to the non-monogamy question if it’s something you’re both interested in.

More like this
18 Hinge Prompt Answers To Try If You’re Looking For Something Casual
By Lexi Inks
Shine All Aquarius Season Long With These 7 Dos & Don'ts
By Brittany Beringer
How Ovulation Affects Your Sense Of Smell, Libido, & More
By JR Thorpe and Lexi Inks
Embrace The January New Moon With These 7 Dos & Don'ts
By Brittany Beringer
Get Even More From Bustle — Sign Up For The Newsletter
From hair trends to relationship advice, our daily newsletter has everything you need to sound like a person who’s on TikTok, even if you aren’t.