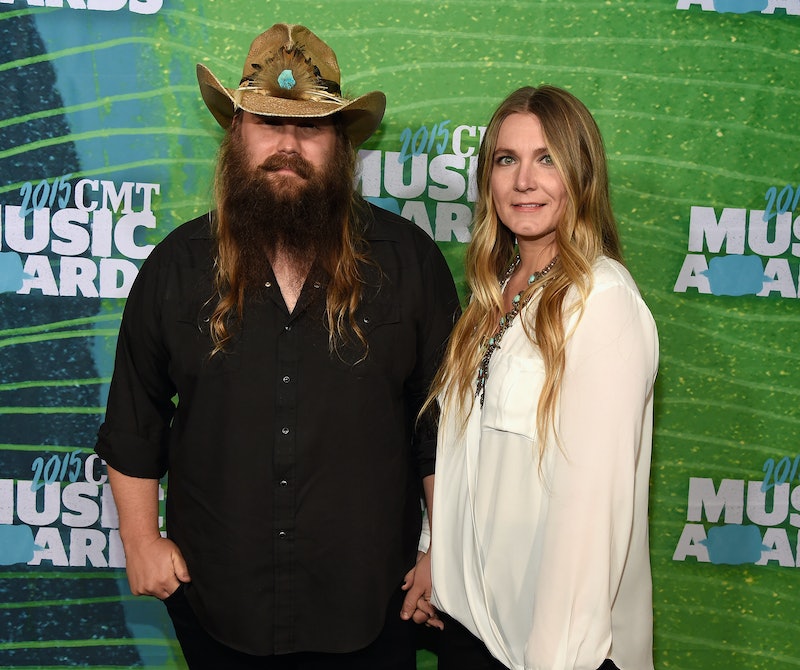 I'm one of many people who became a country music fan after Justin Timberlake performed an epic duet with Chris Stapleton during this year's County Music Association Awards. I have not been able to stop listening to their soulful rendition of "Tennessee Whiskey." Sure, the boys killed it on stage, but right by Chris' side was another equally amazing singer, his wife, Morgane Stapleton. She offered some incredible harmonies to her husband's powerful voice, and considering their chemistry on stage, I wondered how Morgane and Chris Stapleton met.

Being that she was on stage with him during his epic performance with Timberlake, which was also the night that he won three CMAs, I assumed that this couple was very close and supportive of each other — and it's true. It comes as no surprise that the two were brought together through music. Turns out, Morgane herself was already a prolific songwriter in Nashville, around the same time that Chris was there writing and working with bands.

In an August interview with The Washington Post, the couple recounted how they met, nearly 12 years ago. Morgane and Chris were both writing at Sea Gayle Music in Nashville, where she would eventually get a big hit writing Carrie Underwood's "Don't Forget To Remember Me." And she was waiting for the chance to work with Chris, sharing,

We’d hear the jingle of his keys as he walked down the hall, and we knew he was coming to play us whatever new song he had written... Eventually he asked me to write a song with him, and that ended up being our first date. We didn’t get much writing done that night.

The two have seemingly been inseparable ever since. In a recent Rolling Stone profile, the couple is compared to another legendary country couple, Johnny and June Cash, for their fierce chemistry and understanding of each others' music. Morgane said of the dynamics of their relationship,

It's how we're drawn to each other in the first place, was music. That's our foundation in a lot of ways. Maybe that's what shows... I don't want to make music without him.

Goodness, could they get any more adorable? In fact, Chris credits much of the success of his award winning solo album, Traveller, to her creative input. He told The Washington Post, "My wife has great taste in everything but men. The vast majority of the songs on my debut album, Traveller, came from lists she made." They've been each other's backbones in the industry for over a decade, and while they have their issues, their love always prevails. Chris said, "Oh, we drive each other crazy once in a while... But being without each other drives us even more crazy."

Sounds like there are many years of beautiful music making in the future for these two, and I look forward to it.