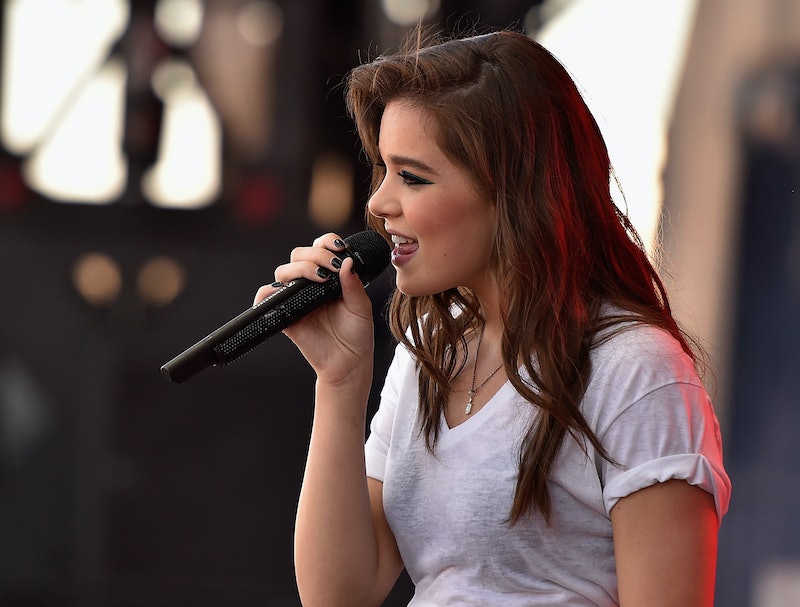 November 13 was apparently national album release day. Hailee Steinfeld's Haiz EP was released on Friday, a highly-anticipated first offering from the actress last seen playing Emily Junk in Pitch Perfect 2. Between Made in the A.M. and Purpose, the world almost forgot about Haiz. While we've grown to love the spunky girl who first came to fame in the 2010 Coen brother's film True Grit, which garnered her an Oscar nod, the actress has turned her focus to music as of late. Hailee Steinfeld's first musical departure is not what you would expect —it's better.

For starters, artists usually tend to ease you into an edgier feel, but Steinfeld throws you right into it. Her first single "Love Myself" has already been hailed for strong themes of female sexuality and empowerment. In an age where women are talking about those things openly, Steinfeld has found a way to connect with a younger generation about those ideas. That's a remarkable feat for someone so young without a firm spot in the music game yet. Only 18 years old, the singer has already been picked as one of the biggest pop stars of the next year, and, after listening to her album, that could very well happen. Beyond her hit "Love Myself," there is my favorite song of all, "Hell No's and Headphones." The title alone tells you that it's going to be a hit.

Her song "You're Such A" is a fun track that also is very different from what you would expect a teen pop star to be singing. One of the lyrics says, "Damn, you're such a... Did you think that I would let you crawl right back into my bedroom after everything we've been through?" Not your typical teen lyrics, but, for Steinfeld, it works. She describes her own music as edgy pop, and she nailed it. While this EP only contains a small sampling of her musical prowress, it only makes the ache for a whole album that much greater.

In an interview with Rolling Stone, she describes her creative process: "One of my favorite parts of this whole experience is putting my own words and my own voice into what I can call my own project." Well, if this is the real Hailee, we like what we see. It's nice to finally meet you. Check out her EP below.