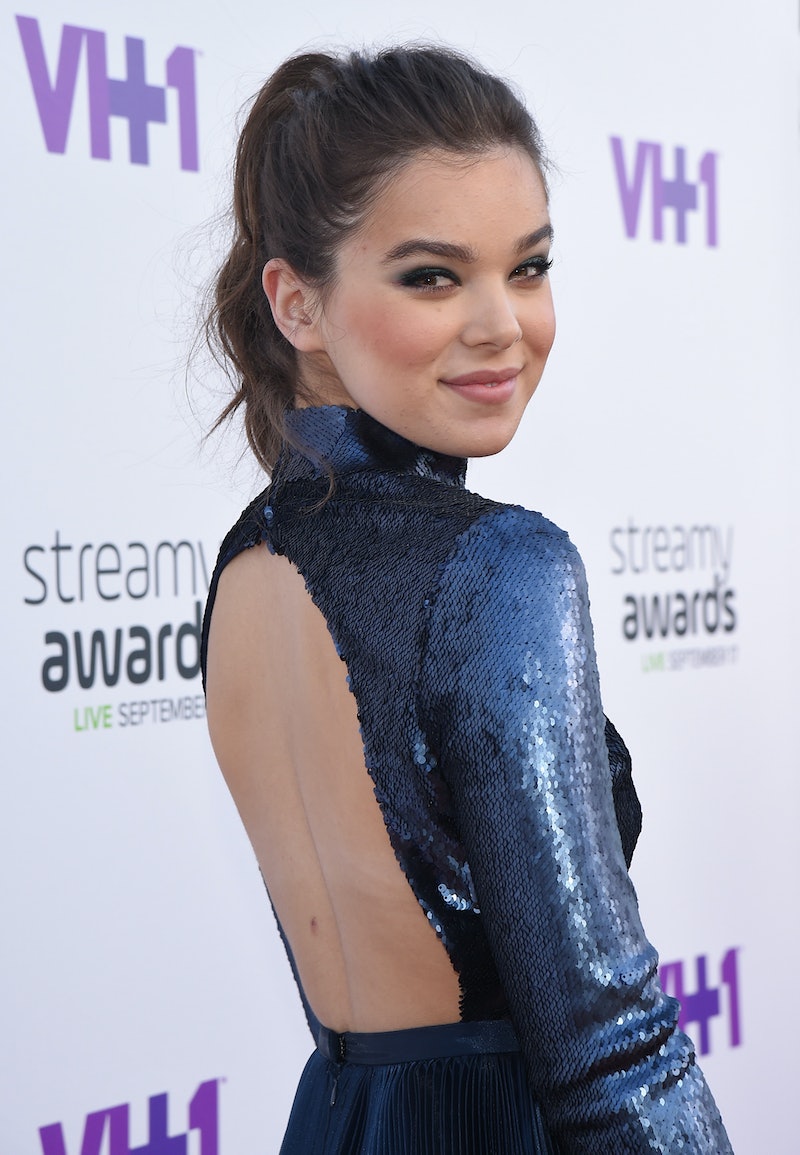 Mark your calendars, Pitch Perfect fans: Hailee Steinfeld's HAIZ EP premieres on Nov. 13. One Direction and Justin Bieber are also releasing new music that day, but you shouldn't let that distract you from HAIZ. The four-track EP features Steinfeld's empowering (and highly suggestive) debut single, "Love Myself," as well as three other new songs: "You're Such A," "Rock Bottom," and "Hell No's and Headphones." The 18-year-old Oscar-nominated actress worked on the project with up-and-coming production duo Mattman & Robin (Taylor Swift's "All You Had to Do Was Stay," Carly Rae Jepsen's "Gimmie Love") and in-demand songwriters Justin Tranter and Julia Michaels (Selena Gomez's "Good For You," Gwen Stefani's "Used to Love You"), so I'm expecting big things.

"Love Myself" climbed all the way to No. 30 on the Billboard Hot 100 chart earlier this fall, so I think it's safe to say that the general public is on board with Steinfeld's venture into music. She has a fantastic voice, but if she wants to stick around, she'll need to show the world what makes her different from the slew of other talented newcomers trying to make it in the industry today. Hopefully, she'll rise to the challenge. We're only seven days away from its premiere (!!!), so here's everything you need to know about the HAIZ EP:

The Cover Artwork Is Stunning

Wow, I was not expecting all of THAT! Steinfeld looks so fierce. (It's definitely evocative of Miley Cyrus' Bangerz cover artwork.)

Get Ready For More Empowering Anthems Like "Love Myself"

Empowerment appears to be a theme on HAIZ: Republic Records' official press release for the EP calls its three new tracks "unshakable anthems." I like how that sounds! "You're Such A" is described as "a cheeky and clever send-off"; "Rock Bottom" is said to highlight Steinfeld's "impressive vocal range"; and "Hell No's and Headphones" apparently features "an infectious chant." I don't know about you, but I'm getting hyped.

Steinfeld May Have Shared A Bit Of "Rock Bottom" On Instagram

Based on the song descriptions from the press release, this a cappella clip Steinfeld shared on Instagram on Oct. 30 sounds like it could be from "Rock Bottom" (but I'm just guessing). She has some serious vocal chops, that's for sure.

We Have Two Clips Of "You're Such A"

Steinfeld performed "You're Such A" live at a London club at the beginning of October (above). She also shared a snippet of the song on Snapchat recently (below).

It certainly sounds promising! The world can always use more empowering breakup jams.

Those are all of the details we have so far. Be sure to check out Hailee Steinfeld's HAIZ EP when it drops next week.