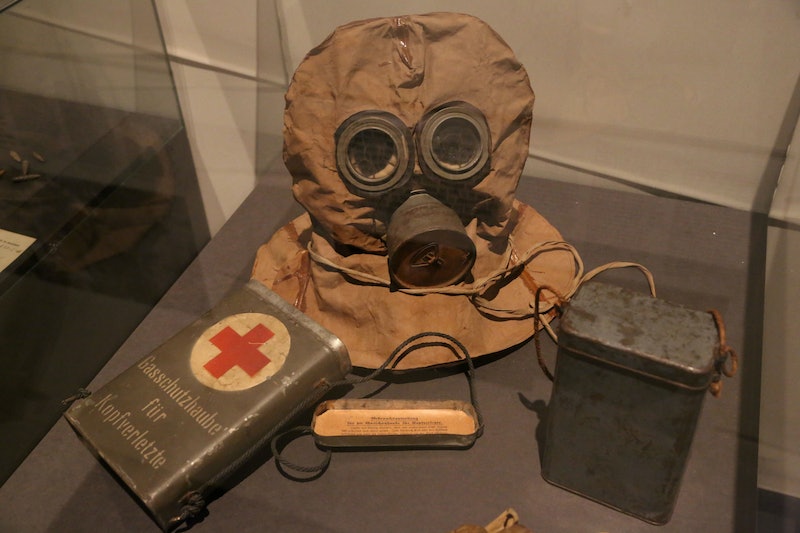 Alice Kelly found something huge in her research on modernist writers and World War I. The post-doc fellow at Yale discovered a piece of lost Edith Wharton war literature among the author's papers at the Beinecke Rare Book and Manuscript Library. News of the unpublished short story has taken the literary world by storm.

"The Field of Honour" comprises nine pages of typed text and hand-written edits. On the back of those pages is a draft of Ethan Frome author Wharton's short story "The Refugees," which she published in January 1919. It's probable that Wharton was working on both of these stories around the same time, in the months leading up to the publication of her novel, The Age of Innocence.

Wharton was one of a group of American ex-pat war writers — which included Ernest Hemingway, T.S. Eliot, and H.D. — living in wartime Europe. She first moved to France, where "The Field of Honour" takes place, in 1907. Wharton served as a reporter when WWI broke out in 1914, and a collection of her war journalism, titled Fighting France, was published in November 1915. Kelly will publish a critical edition of Fighting France in December 2015.

Like many writers living in Europe in the 1910s, Wharton was compelled to write about the war as it affected those around her. In 1916, she wrote to Charles Scribner: "So many extraordinary and dramatic situations are springing out of the huge conflict that the temptation to use a few of them is irresistible."

"The Field of Honour," like much of Wharton's body of work, delves into the inner workings of society: how individuals and groups comingle with each other in different lights and circumstances. On the surface, the short story concerns a young American woman who marries a French nobleman, who is ultimately sent off to the front. But underneath that façade, Kelly writes that Wharton's tale "depict[s] ... a common wartime fear: that women were profiting socially, professionally, even sexually from the wartime economy that privileged their lives over male lives."

It's unclear why Wharton left "The Field of Honour" unpublished. It is, of course, entirely possible that the author meant for those pages to be the beginning of something more than just a short story. With roughly 100 years between its writing and discovery, however, we've likely lost all hope of knowing the author's true intentions.

"The Field of Honour" and "The Refugees" are both available to read online.