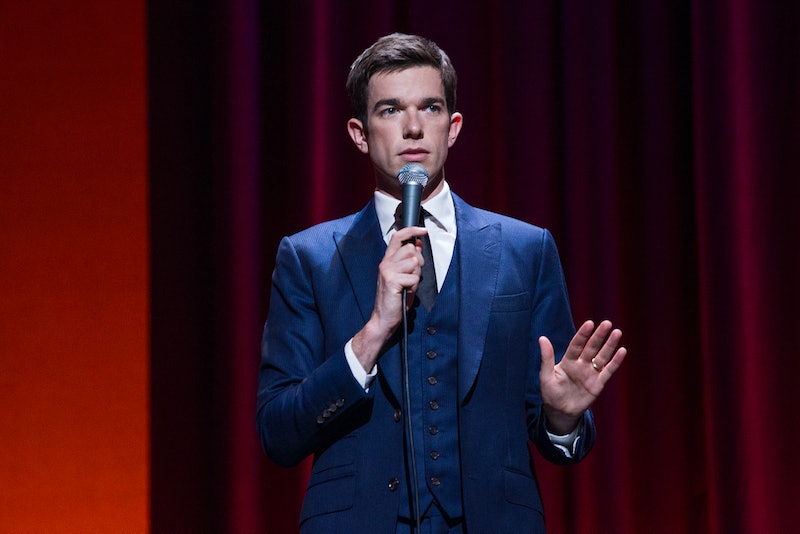 Often the go-to trope for comedians is to lament about the supposed hellhole that is marriage. Sometimes these jokes work, but more often they just feel stale, making it clear that the comic needs to dig a little deeper into the old creativity cabinet for some less antiquated material. However, in his new Netflix special John Mulaney: The Comeback Kid, the comedian nailed this particular brand of comedy, because he joked about marriage in a totally new light that still managed to be hilarious. Throughout the special, which premiered on Nov. 13, Mulaney discusses his marriage; his wife, Annamarie Tendler; and the constant pressure to have children, but did not once disparage his partner or paint their marriage as some kind of torturous situation. See? It can be done!

Mulaney's jokes about his marriage began pretty early in the special, mentioning their wedding about five minutes in. His started the bit by explaining how much he loves to refer to Tendler as his wife, which is ridiculously adorable. After winning me over with that show of adoration, he transitioned into the process of getting engaged. He brought up the dated, sexist saying, "why buy the cow when you can have the milk for free" and continued on by explaining how offensive to an entire gender that is. At this point, my love for Mulaney grew exponentially and it only got better from there. He then lightly poked fun at his engagement, answering the cow conundrum by saying:

Why buy the cow? Maybe because everyday the cow asks you when you're going to buy it. And you live in a really small apartment with the cow and you can't avoid that question at all. Also, the cow is way better at arguing than you are.

That's hilarious and all in good fun, and also something I could relate to, because I did something similar to my now-husband when we were dating. But John really nailed it when he finished the joke by saying:

Stop it. I do declare, this man is making me weak in the knees.

He went on to touch upon the absolutely frustrating phenomenon that suddenly occurs when you get married. Everyone feels like they have the right to inquire about your timeline for reproducing. He tells a story about house hunting with a realtor who was very pushy on the subject, declaring that each room could "potentially be a nursery." Any adult who has ever been married or in a committed relationship for a long period of time can likely relate to the complete rage you feel when you are constantly barraged with questions about when you will produce a life out of your collective gametes.

He didn't stop there, though. He mentioned that their child is actually a french bulldog named Petunia (Seriously. I die.) and that they required a dog trainer to come teach her how to be a better dog. At one point the trainer said that the problem was that John was no longer the alpha of the household, Petunia was now the alpha. Mulaney chuckled and said "I was never the alpha of the house. I turned to my wife and was like 'let's pretend, it will be fun.'" Again, he completely killed it while still showing his respect for Tendler.

It's so refreshing to see a male comic find a way to incorporate his relationship into his set without resorting to jabs at his partner or dramatic condemnations of marriage. The Comeback Kid is hilarious from start to finish, but it's these glimpses into his personal life that Mulaney's Netflix special shows what sets him apart from other comedians.