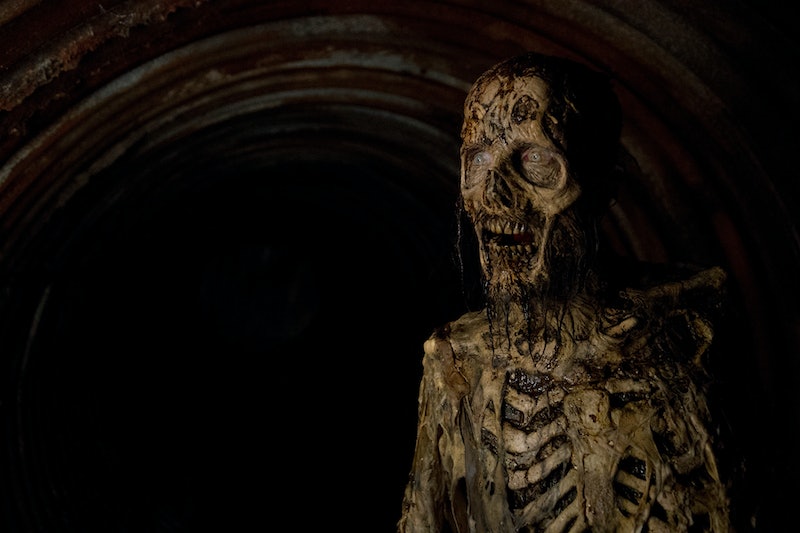 This is getting ridiculous. I understand that The Walking Dead has a lot of characters spread out over multiple locations this season. However, are they really going to keep putting off whether or not Glenn is alive on The Walking Dead ? Since Glenn fell off of a dumpster to almost certain doom, we have gotten a Morgan-centric episode and an Alexandria update, but nothing from the pizza delivery hero himself. What kind of sick avoidance technique are they going to try next? I'm starting to get the feeling that the show is taunting us.

Last Sunday's episode of The Walking Dead teased the audience by literally writing on a wall that Glenn was dead, and then erasing those words. It's too much! I feel guilty about focusing so much of my energies on one character, but the suspense is distracting. Romance may be blossoming between Rick and Jessie as well as Tara and Denise, but my heart is too busy breaking for the possibility that Maggie may never see the father of her child again.

I honestly appreciate and love that a show with the mainstream popularity and viewership that The Walking Dead has is willing to slow the story down and take these narrative risks. However, that doesn't mean I can't be a little bit bitter about it. Just for fun, here are nine scenarios for episodes that I think The Walking Dead is likely to try before allowing us to see what went down at that dumpster with Glenn.

I mean... I kind of do want to know how he pulled that off.

A Clip Show Where Everyone Reminisces On Their Highs & Lows

Clip shows, for you youngsters who have not been blessed with this type of low-budget narrative, were episodes that found a creative way to incorporate multiple flashbacks to scenes from prior seasons so we could all catch up or remember. You know, before DVDs, Netflix, and Wikipedia made everyone experts in a show's canon.

They went black & white in the season premiere, so why not? I'm all for more stylistic choices, and singing might distract me from my Glenn angst.

Enid's Creatures: An Adventure With Animals

Rest in Peace, Mr. Turtle. Enid did run off into the woods, so The Walking Dead could make the choice to follow her instead.

We get it, they had it easy behind those walls. That's the only flashback I don't need to see.

A Painfully Experimental Flash To The Sideways World

Where are my Lost fans at? What if The Walking Dead just started showing as an alternate universe in which none of these characters were living in an apocalypse at all. They might as well, i they want to keep up the Glenn suspension.

An Epic Conclusion To Flight 462

Oooooh which passenger is a walker? What's going to happen when they get to Phoenix? I can definitely wait to find out.

Daryl's Motorcycle Runs Out Of Gas

This one isn't too far off. Sunday's episode of The Walking Dead will center around Daryl, Abraham, and Sasha on their return to Alexandria. Maybe they'll run into Glenn and maybe they won't. However, if the last two weeks on The Walking Dead are any indication, we should not get our hopes up for a resolution to "the Glenn question" just yet.