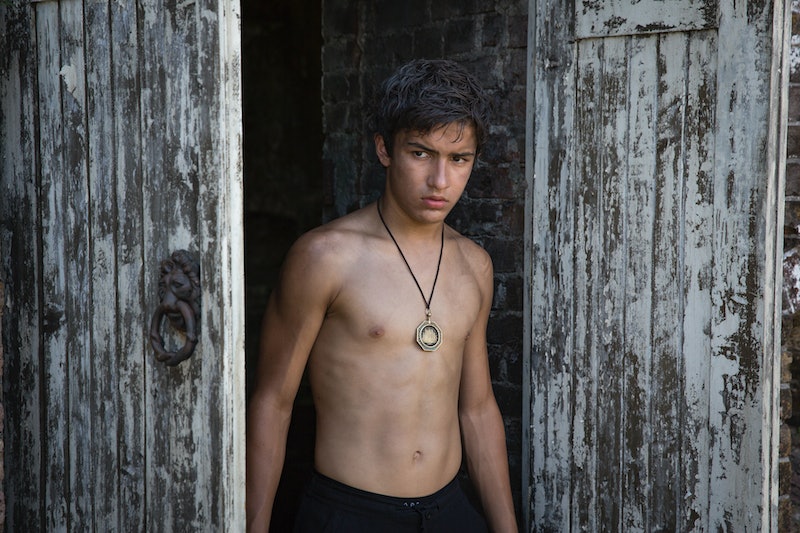 One of the most mysterious characters on Into The Badlands pops out of a box that a collection of nomads have stolen, and the series premiere only gets weirder from there. Referred to as M.K. in the credits, he gets taken under the wing of an incredibly lethal soldier and quickly puts himself and those around him in great trouble. He rarely wears more than some ratty pants, but has a pendant that seems to be drawing attention from some important and powerful people. So who is M.K on Into The Badlands , and why are people trying to capture him?

M.K. claims to come from a place called "Ezra," which exists outside of the Badlands that the characters of the series have been familiar with for their entire lives. His pendant — an item so important that M.K. gets into a fight when someone tries to steal it — shows a tall, proud city standing with a heavenly backlight against it. The image of these structures moves Sonny, a loyal and powerful soldier, to begin reconsidering his position amongst the Baron (leader) and other clippers (soldiers) in his territory. M.K. is brought into the ranks of clippers at a low-level, and quickly starts making enemies and allies amongst his fellow trainees.

It's unclear what "M.K." refers to, but there's a very good chance that these initials are short for "Magic Kid," because when he gets into a conflict with another clipper-in-training, M.K. displays some super-human strength and weird eye-glowing, accompanied with mysterious whispers in a Hulk-like transformation. M.K.'s hyper-powerful outburst of seemingly mystic origin adds a level of fantasy to the science-fiction-post-apocalyptic-martial-arts-western series.

The power is activated whenever M.K. bleeds, and was apparently bad enough that he and his mother needed to leave his home of Ezra. M.K. tells Sonny he has a history of waking up after an outburst and seeing someone "hurt, or worse." M.K. and his mother seem to believe someone in The Badlands will be able to fix him, but now a powerful Baron named "The Widow" is after him, and likely wants to weaponize M.K.'s powers.

Sonny helps M.K. escape the barracks into a tunnel beneath the territory, leading to the poppy fields outside the fort and seemingly to freedom, but with this many people searching for M.K. will he really be getting back home to Ezra any time soon? Will he return to Ezra only to discover that it's not the same as when he left it? It seems like no one in The Badlands has the answers to those questions yet.