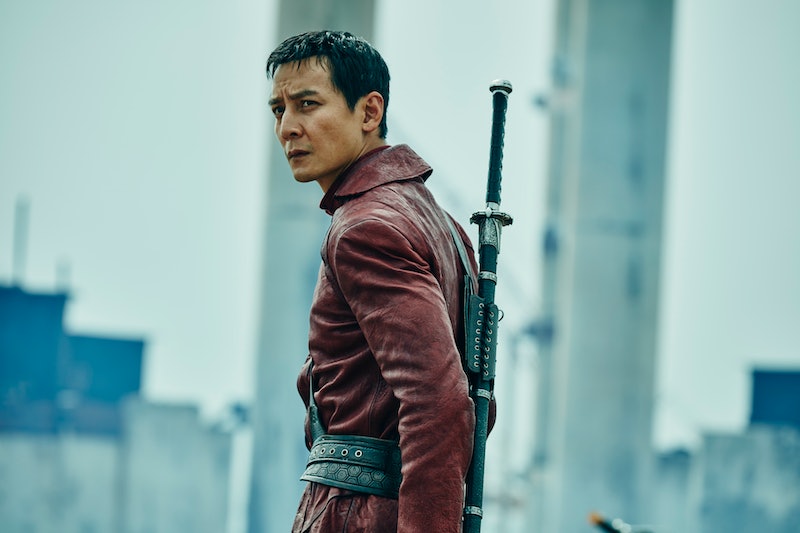 It's commonly said that when you create a piece of art, whether it be a book or a song or a movie, it should be something that you would want to read, listen to, or watch. The creators of AMC's new drama, Into The Badlands , have done exactly that. "There wasn’t a martial arts show on television, and we wanted to do a show that would make us jealous if it was on TV," co-creator Alfred Gough told the Television Critics Association at the summer press tour in July. But where did the inspiration for this action series come from, other than its creators' love of kung fu? According to Gough and his co-creator Miles Millar (who previously created Smallville together), Into The Badlands is loosely based on Journey To The West .

For those unfamiliar with Chinese folklore, Journey To The West is a novel published during the Ming Dynasty circa 1592 by author Wu Cheng'en. Itself based on Great Tang Records On The Western Regions by the Buddhist monk Xuanzang, an account of his own 17-year journey to India and back, Journey blend's Xuanzang's factual story with fantastical elements of classic Chinese mythology. Published nine centuries after Xuanzang's travels, Cheng'en's Journey would go on to become one of the "Four Great Classical Novels" of Chinese literature.

In exactly 100 chapters, Journey tells the story of Tang Sanzang (Xuanzang's stand-in), a monk who is tasked by Buddha himself to travel to India to retrieve the original Buddhist scriptures and return them to China. He is accompanied on his trek by three traveling companions — Sun Wukong (Monkey King), Zhu Bajie (Pig), and Sha Wujing (Friar Sand) — as well as his faithful steed, dragon prince Yulong. Once they all successfully return to China, they're all rewarded by the heavens: Tang Sanzang and Monkey King are given Buddhahood, Pig is promoted to an altar cleansar, Friar Sand attains nirvana, and Yulong is transformed into a någa (a Buddhist snake deity).

It remains to be seen how this story will tie into the plot of Badlands. Here's the official plot synopsis of the show, courtesy of AMC's own website:

Centuries from now, a feudal society has emerged in the wake of civilization's destruction. This area is now called the Badlands and is uneasily divided among seven rival Barons. Each Baron enforces their iron rule with the aid of loyal armies of trained assassins known as Clippers.

The most lethal of the Badlands’ Clippers is Sunny — the Regent (Head Clipper) and most trusted advisor of Baron Quinn. For decades, Quinn has been unchallenged as the Badlands’ most powerful Baron; however, the territory’s newest Baron, The Widow, has begun testing his appetite for a fight.

One day, Sunny rescues M.K., a teenage boy who has survived a deadly ambush. Sunny soon comes to understand that the teen harbors a dark secret and has a hefty bounty on his head. Together, they will embark on an odyssey that could mean the difference between chaos and enlightenment for everyone in the Badlands.

So, we have mention of an odyssey and some enlightenment, both of which clearly tie into Cheng'en's Journey. But the rest is a bit of a mystery at this point. Who is Tang Sanzang in this iteration? Is it our nominal protagonist, Sunny? Or is the closer analogue actually the mysterious M.K. and his "dark secret"? If so, who are his three traveling companions? Are they on a mission to find a literal physical object, like the Buddhist scriptures, the Holy Grail, etc.? Or will their enlightenment be of a more metaphorical variety? Is Into The Badlands *really* based on Journey To The West, or was that just a hook to get people interested in the show?

If the show's inspiration truly did come from this ancient source, then what does that tell us? It tells us to expect themes of self-realization, sin, and redemption; to expect a series of trials and tribulations as our heroes face a barrage of demons, monsters, and other evil beings who hope to impede their progress; but mostly to expect a lot of broad Chinese influences amongst the show's style, design, and fight choreography.

Hopefully Journey To The West's real influence on Into The Badlands will become even more clear when we tune into the series premiere, "The Fort," this Sunday at 10:00 p.m. ET on AMC.

More like this
The 'PLL: Original Sin' Creators Say A’s Identity Will Be “Very Clear” By The Season Finale
By Alyssa Lapid
'The Sandman’s Ending Is A Departure From Neil Gaiman’s Comic Book Series
By Kadin Burnett
The Bestselling Novel 'The Doll Factory' Will Be Adapted Into Thrilling TV Series
By Catharina Cheung
'Bridgerton' Newbie Hannah Dodd Has Thoughts On Colin and Penelope’s Love Story
By Bustle UK
Get Even More From Bustle — Sign Up For The Newsletter