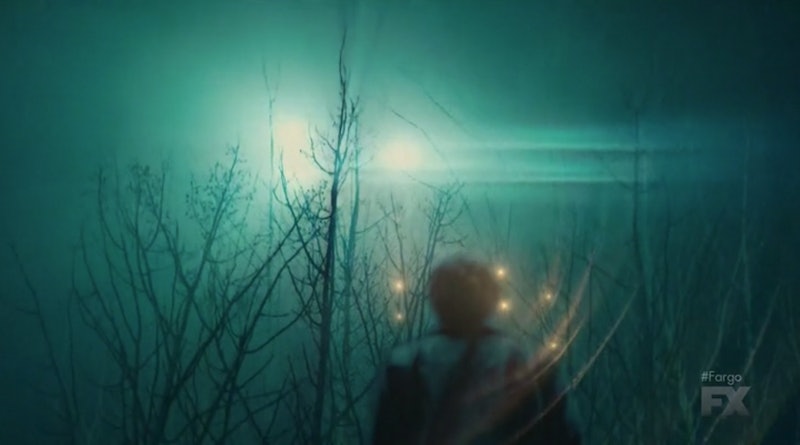 Fargo is a weird show. It shows us criminals that don't look like criminals, heroes that don't look like heroes, pretends to be a true story when it's not, and introduces "stranger than fiction" elements. For example, now there are aliens on Fargo , and it's not clear why. What do they want? Why are they here? Are they even real? It's the biggest mystery for the audience, and yet none of the cast of characters seems to be aware of a possible extraterrestrial presence.

If no one in the show is going to try to solve the mystery of these soaring lights, then it's up to the audience to piece out why exactly aliens are populating small towns like Luverne. The only thing more mysterious than why aliens are in Luverne is the unknown reason the writers decided that their Minnesota period-piece crime-drama should have a little bit of time in the show dedicated to some kind of otherworldy presence haunting the town of Luverne. These UFOs didn't end up on the show by accident, and I have some theories as to what they could be and why they're there.

The UFO Rye Saw Was Actually Light Reflecting Off That "Get Well Soon" Balloon.

When searching the murder scene, future hero Molly Solverson discovers a shiny Mylar balloon on the ground nearby. A balloon that seems to be very good at reflecting light, perhaps good enough to allow someone to mistake the balloon for a UFO? Remember, Rye was under the influence of drugs when he witnessed the UFO, so maybe his senses weren't working properly.

The UFO Is A Metaphor For Paranoia

In an interview with Variety, showrunner Noah Hawley said "the ’70s [were a time] of major paranoia in America." The recurring presence of aliens could be meant to set the uneasy, paranoid mood that influences a lot of cultural thinking at the end of the decade. A recent example of using the UFOs as fear is when Betsy takes her first dose of medicine — which she fears may be a placebo — and is entranced by a coffee stain on Molly's drawing which appears to make the sun look like a UFO. The show lingers on the drawing and introduces an eerie music cue, which matches Betsy's feelings about the possible placebo.

The UFO Is A "Distancing Effect" For The Story

The Distancing Effect, or Brechtian Verfremdungseffekt, is a storytelling device used in theater and film where the author intentionally distances the audience from the actions to "prevent the audience from losing itself completely in the narrative." Methods include having a character speak to the audience directly, commenting on the aspects of the medium, or any other method used to remind the audience they're watching a fictional story. Although Fargo claims to be "based on a true story," perhaps the intention of the aliens is to remind viewers that it's a fictional tale.

The UFO Represents The Writers

In Episode 3 of Season 2, Lou Solverson gets in line to fuel his car, and gets into a strange conversation with a fellow who tells Lou:

Rapid Fire. Some Round. Some Oval...Circular Patterns. Unnatural. Hoverin' In The Sky. They come only in the odd months. The visitors. Always in sets of three. Such a night was two nights past. Reports from Mankato to Vermillion...from above. Some say they take you to their ship and probe ya in places you don't wanna mention. I believe their purposes are more benevolent. As the caretaker to the zoo. Strange happenings occur; they are near.

Lou's only response to the man is "Strange happenings, huh? I wondered what was causin' that." An argument could be made that this conversation about aliens is a representation of the writers of Fargo. They create "strange happenings" (the many murders that have occurred) when they are around. The writers are also benevolent "caretakers" of the characters of the show. Similar meta-fictional techniques were pioneered by author Kurt Vonnegut (who Hawley has written about in the past), whose most famous book Slaughterhouse-Five features an alien abduction.

The UFO Was All In Rye's Head

The most prominent vision of the UFO so far, as seen by a character on Fargo, was the Rye Gerhardt sighting moments before he was run over by Peggy Blumquist. Rye was coked-out and had recently been blinded by the judge's pepper spray when he saw the UFO, so there's a chance that the audience can't trust his point of view. Fargo recently gave us another point of view fantasy from Charlie when he sees Ed Blumquist, his intended murder target for the first time. Charlie imagines him in a dim, green light with a grim expression on his face, soaked in blood. A few moments later, the audience sees the truth: He's nice, jovial Ed who has a little bit of blood on his apron (he does work as a butcher after all). Fargo has shows that it's willing to show a delusion from a character's perspective to the audience — perhaps that's what they were doing from the beginning?

The UFO Is Absolutely, 100 Percent Real Within The Show

The whole "UFO In Minnesota" subplot has been strangely similar to a "real" encounter that happened in Minnesota in 1979 when a sheriff claims he saw a UFO. Who's to say that Lou Solverson won't end up on the receiving end of a collision with those flashing, circular lights in the sky by the end of the season? It would be a very left-field choice for the series, but it wouldn't be forgotten any time soon.

The presence of a UFO over the proceedings in Fargo is easily the weirdest part of the season so far, and over halfway through the season we're no closer to getting an explanation for its presence than we were when we first saw it hovering over Rye Gerhardt. Hawley and the show's other writers certainly have a reasoning for the presence of the UFO, but it looks like we won't be getting an easy answer any time soon.