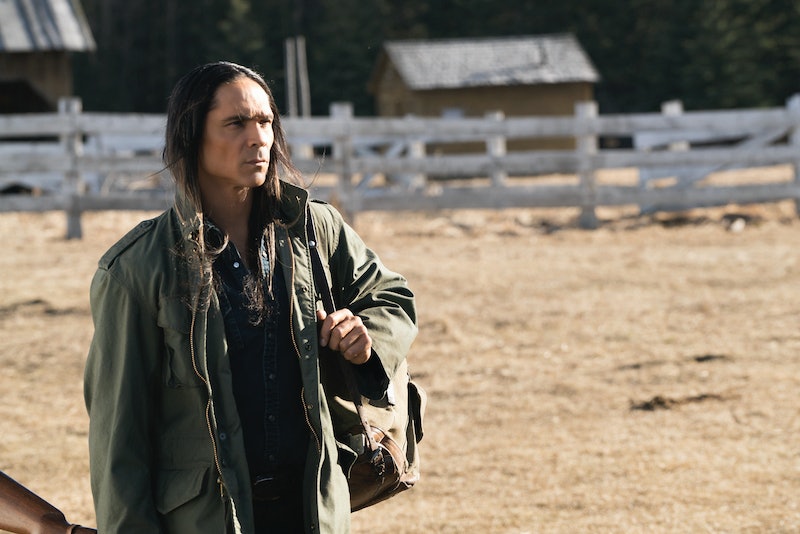 As the second season of FX's crime anthology Fargo continues marching relentlessly towards the ominously-named Sioux Falls Massacre, viewers have been treated to a truly baffling subplot: the inexplicable presence of aliens in 1970s Minnesota. The first glimpse of a UFO in the premiere was a shocking turn of events for a show that, in its first season at least, was very grounded in reality. (This extra-terrestrial presence has been reminiscent of another FX show, American Horror Story, which also introduced an alien subplot into its already-crowded second season, Asylum.) So what's with the UFO on Fargo Season 2?

There has been one passing reference to the visitors from outer space in all four episodes of the season so far. Aside from the flying saucer that Rye Gerhardt observed before getting hit by Peggy's car in "Waiting For Dutch," there was also the episode-ending narration from War Of The Worlds in "Before The Law," Lou's conversation with the "I Want To Believe" stranger in "The Myth Of Sisyphus," and Hanzee's strange loss of two hours after glimpsing strange lights outside the Waffle Hut in "Fear And Trembling."

Here are five possible explanations for what's going on with this very strange subplot:

Showrunner Noah Hawley might have included Rye's encounter with extra-terrestrial visitors as a nod to a "real" UFO sighting that took place in Minnesota in 1979 — the same year that Fargo Season 2 is set in — when (according to ufocasebook.com) a Minnesotan sheriff claims he saw a UFO. Here's his account of the supposed extra-terrestrial event:

August 27, 1979 — Deputy Sheriff Val Johnson of Marshall County was on duty that night, driving not far from the North Dakota border, when at around 1:40 a.m. he saw a light through his side window. [...] Suddenly, the light moved toward him, traveling so fast that it almost instantaneously was upon his car (covering an estimated mile and a half). Johnson was blinded by the brilliance of the light and heard glass breaking, then lost consciousness. When he returned to consciousness, the car was stalled and had skidded across the highway. He felt sluggish and shaky. He radioed headquarters, at 2:19 a.m., to request assistance. Soon another deputy arrived, who called an ambulance. The doctor who examined Johnson found him to be in a mild state of shock. His eyes were irritated as if Johnson had suffered "mild welder's burns," and Johnson couldn't stand to be exposed to any bright lights.

Of course, Rye wasn't a deputy sheriff; but many of the other details appear to match up, including the location (near Minnesota's border with North Dakota), the timing (late at night), the sighting (strange lights), and the time loss (which Ohanzee would later experience). Maybe this whole strange subplot is merely Hawley's way of faithfully adapting his setting and time period.

2. It's A Coen Bros. Reference

Of course, this isn't the first time a Coen Bros. property has flirted with an otherworldly presence. In their 2001 noir The Man Who Wasn't There, Billy Bob Thornton (also of Fargo Season 1) stars as Ed, a barber blackmailing his wife's lover. In one memorable scene, a grieving widow tells Ed a story about the time she and her late husband saw a UFO. In the film's final scene, Ed himself glimpses a flying saucer after being sentenced to death for murder. Like in Fargo, the extra-terrestrial presence simply flits about the edges of the story without directly impacting events themselves.

3. It's Paving The Way For Reagan

Perhaps we need some outside universal threat. I occasionally think how quickly our differences worldwide would vanish if we were facing an alien threat from outside this world.

As some Fargo fans may know already, Reagan himself will be showing up on Season 2 as he makes a tour of the country as a presidential hopeful. He'll be played by Evil Dead star Bruce Campbell, and he'll be popping up for the first time in this Monday's episode, "The Gift Of The Magi." Maybe the inclusion of the UFO is a nod by Hawley towards Reagan's wish for an otherworldly threat that would cause all humans to put aside their petty squabbles. The war between the Gerhardts and the Kansas City mafia would seem tame in comparison to an alien invasion.

Then again, maybe the aliens are just a metaphor for the aura of unease that was settling over the country in the '70s. Following the disillusionment of the Vietnam War and the scandal of Watergate and Nixon's resignation, the American people were adopting a sense of paranoia and a fondness for conspiracy theories unprecedented in American history. An obsession with ETs was one of the byproducts of that massive cultural shift. "For me it ties into the narrative that in the ’70s everything became like 'black is white, the sky is the ground.' That’s the mindset," Hawley explained in an interview with Variety. "What do they say in A Serious Man? 'Accept the mystery," he said, referencing yet another Coen Bros. movie. "It’s not in there accidentally, let’s put it that way. We’ll see what it adds up to."

5. There Are No Aliens

Or perhaps our quest for a deeper meaning behind the lights in the sky is no more meaningful than the American public's predilection for conspiracy theories during that time period. Perhaps Hawley is purposefully instilling in his own viewers the same sense of paranoia that existed amongst the public back in the '70s. At least, that's what star Jeffrey Donovan (who plays Dodd Gerhardt) thinks. In an inteview with Vanity Fair, the actor gave his opinion on the UFO subplot:

[Hawley] wants the audience to believe what they want to believe. He always intended it to be a weather balloon. But in the 70s imagination and the fear that’s going on . . . that’s what’s playing on these people’s psyche, this kind of collective delusion and how impressionable they all are. I think it was more that than it was any aliens. I never felt that there were aliens.

It's unclear if Donovan's reference to a weather balloon is an actual spoiler, or just the actor's personal theory on the showrunner's private intentions. We'll probably have to wait until the Season 2 finale to find out either way.