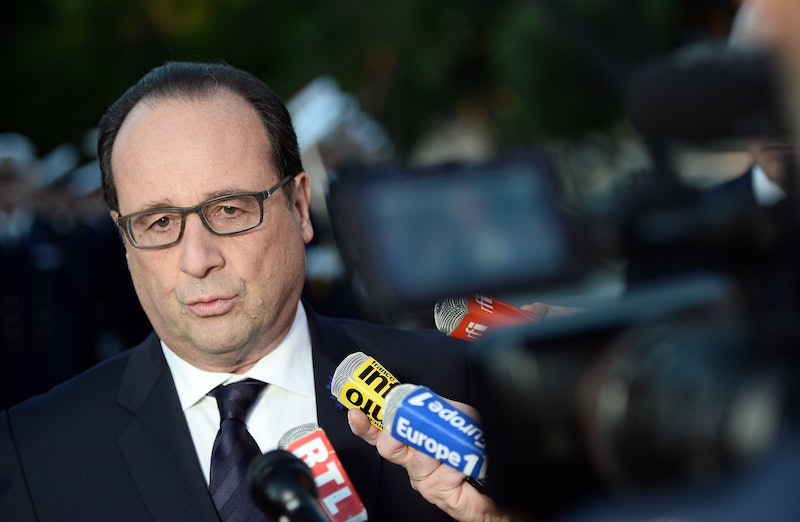 On Friday, Nov. 13, several tragic attacks occurred in Paris, France. According to multiple reports, around the city gunmen opened fire and people with grenades caused explosions. Explosions took place near Stade de France, the national stadium, where the French national soccer team was playing Germany. President François Hollande was in attendance, and according to the BBC was evacuated. But where is President François Hollande now?

The scene at Stade de France appears to be, unsurprisingly, a hectic one. A Vine from the stadium was posted on Twitter that show the explosions could be heard inside the venue, and photos show that many fans moved onto the field.

The current whereabouts of President Hollande have not yet been reported other than that he was evacuated from the stadium.

In addition to the gunfire and explosions, there are reportedly 100 hostages being held in a concert hall by six to eight hostage takers. The current death toll from the events is said to be at least 60 people. It is being reported that the incidents are linked. According to The Telegraph ,

Grenades were reportedly thrown at a stadium in the north of the French capital where a football match between France and Germany was being held, witnesses said.

The first shooting to be reported took place at a Cambodian restaurant in the 10th arrondissement of the city, an area with many crowded bars and restaurants, particularly busy on Friday evening.

A second shooting was reported minutes later near a nightclub in the area, Le Bataclan, where gunmen were said to be holding hostages.

We will update as more information comes in about Hollande's location.