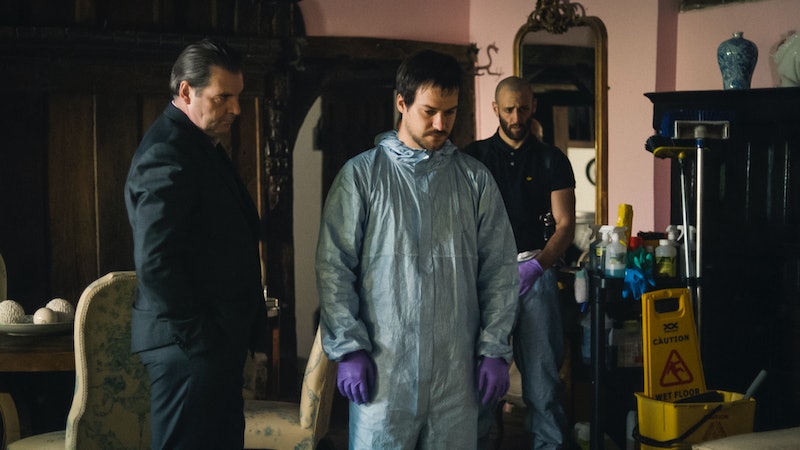 On Saturday, Nov. 14 the Esquire Network will premiere the show Spotless , their first scripted venture, which follows two estranged brothers who are accidentally looped into the world of organized crime. According to the show's synopsis, the brothers Jean and Martin, played by Marc-Andre Grondin and Denis Menochet "are forced to reconnect after their lives were torn apart by a terrible childhood secret. Witnessing a double murder, they jeopardize their successful crime scene cleaning business by inadvertently becoming entangled in the deadly dynamics of organized crime." But, is Spotless a true story? Not in a "ripped from the headlines" kind of way, but it does have elements of truth in it. In an interview with Bustle, actors Marc-Andre Grondin and Brendan Coyle (who plays the mob leader) divulged the inspirations behind their characters and how they researched their roles.

"I basically just went online and tried to find interviews about people that are doing this job," Grondin says of his character's job cleaning crime scenes. "Most of [those who do it] are always saying that it started because it was a job that everyone else said no to, and they felt bad for the family [and felt that the relatives] didn't need to [clean up] themselves ... It's a very fascinating world."

Crime scene cleaners are very real, and their job is not for the faint of heart. "You see the blood stains, the gloves that the EMS threw on the floor," real crime scene cleaner Ron Gospodarski told CNN. "The police put up this crime scene tape, nobody can come in here. And then they just walk away from it."

Another crime scene cleaner is Cory Chalmers, who was a firefighter before he joined the cleanup business out of a desire to spare families the pain of dealing with things themselves. "I came up with this idea just from responding to calls and from seeing some of the horrific scenes we'd be leaving behind for families to deal with," he said to CNN, recalling one incident of a man's suicide as the catalyst for his job change. "The wife was just screaming hysterically. As we walked out, we passed the woman. Just the look in her eyes, I couldn't stand it anymore. That was the one that pushed me over the edge and made me want to do this."

As for Brendan Coyle, his character plays Nelson Clay, the mob boss who recruits the brothers to take care of his own messes. To research his role, he talked with creator Ed McCardie to work out the details of his character.

"I have a connection with Ed in that his father is from the town that I'm from, and my mother is from the town that he's from outside Glasgow," Coyle says. "So we talked about dangerous men that we met and came across and heard about and [Ed] was already on his way to creating this character who was a mob leader but a philosopher and a thinker. He's not about violence and anger and rage, but rather all about psychological manipulation."

So, no, Spotless isn't a story based on any one incident, but there's no denying that there are elements of truth in all its characters. Check it out for yourself Nov. 14 on Esquire Network.

More like this
This First Look At 'The Gold' Shows Jack Lowden In A Whole New Light
By El Hunt and Sam Ramsden
A New Netflix Doc Will Explore The Unsolved Murder Of Jill Dando
By Sam Ramsden
Here’s What Happens To Bill & Frank In 'The Last Of Us' Video Game
By Brad Witter
Michael B. Jordan Tackled His "Public Breakup" With Lori Harvey On 'SNL'
By Brad Witter
Get Even More From Bustle — Sign Up For The Newsletter
From hair trends to relationship advice, our daily newsletter has everything you need to sound like a person who’s on TikTok, even if you aren’t.