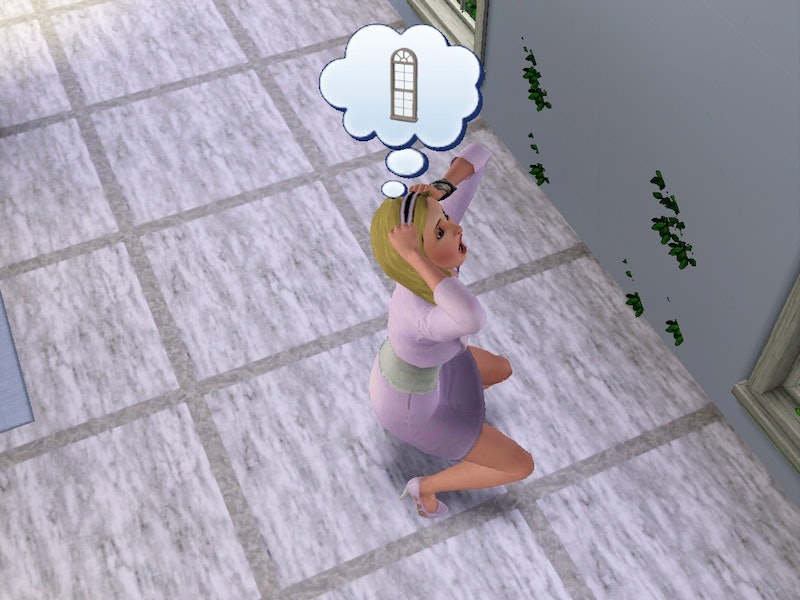 Previously on The Sims Scream Queens: The Sim Red Devil floated around the Sim Kappa Kappa Tau house entirely unnoticed, like a bucket hat-wearing specter; the Sim Red Devil confronted the paparazzo, but the conversation did not go according to plan; Sim Chad played hide-and-seek with his reflection; Sim Chanel #2 tried to tell Sim Chanel about her movie ticket mortuary adventure, but Sim Chanel could not be bothered; Sim Chanel was really amped on the pair of boxing gloves she just purchased. You can check out the previous installment of The Sims Scream Queens here.

Last week, the Sim Red Devil found out that he does not boast the power of invisibility. Quite the opposite, really. Between the clown face paint, the bucket hat, and his bright red ensembles, the Sim Red Devil is extremely hard to not see. "Eye-catching" is an understatement.

However, just because the Sim Red Devil is not invisible does not mean invisible Sims do not exist. Invisible Sims are very real. As a matter of fact, one invisible Sim just so happened to move into the Sim Kappa Kappa Tau house.

Ack, I'm getting ahead of myself. Allow me to start from the beginning.

Uh Oh, Is That A Bucket Hat I See?

What was he doing in the kitchen?

Why Was He Posted Up At The Kitchen Table?

Was this all a part of his latest devious scheme?

Dude was just noshing on a hot dog.

I Should've Known He Was Getting His Grub On

When we last left The Sims Scream Queens, the Sim Red Devil's stomach had begun a-rumblin' in the middle of the non-frontation with the paparazzo. So, he called it a night, caught a cab back to the Sim Kappa Kappa Tau house, and cooked a hot dog.

On The Other Side Of The House, A Window Upset Sim Chanel #5

I don't know what happened here, but Sim Chanel #5 wailed for about 15 seconds.

After she walked the perimeter of the house, Sim Dean Munsch went inside.

Sim Dean Munsch Fell In Love With Her Reflection

Um, Why & How Was The Computer Moving All By Itself?

The image on the monitor changed multiple times, the mouse wiggled around, and the chair remained empty.

You know what that means, right? INVISIBLE SIM!!!! AN INVISIBLE SIM LIVES IN THE SIM KAPPA KAPPA TAU HOUSE!!!!

Was he going to steal something? Hack her computer? Vandalize her couture gowns? What was he up to?!

That was not a part of his plan.

Instead, The Sim Red Devil Walked Into The En Suite Bathroom

Oh no. Was he going to steal all of the toilet paper? That would be a rude prank.

The Sim Red Devil Stared At The Sink

What the heck is he doing?

I Figured Out What It Was He Was Doing

Oh. I see. He just wanted to look at the soap dispenser. That's all. Nothing nefarious.

When The Sim Red Devil Turned Around, He Was Greeted By Two Angry Sim Kappa Kappa Tau Presidents

They wanted to know what he was up to. He worried the wouldn't understand his fascination with soap dispensers, so he didn't tell them. Before Sim Chanel and Sim Zayday could get an answer out of him, he sprinted away.

Meanwhile, Sim Chanel #2 Clocked In At The Ol' Salt Mines

The mortuary dress code: all pastel everything.

Sim Chanel Washed A Plate In A Bathroom Sink

The Sim Red Devil Got Into A Fight...

...with someone who wasn't there.

Who Was The Sim Red Devil Arguing With?

THE INVISIBLE SIM STANDING NEXT TO THE SINK.

What Did The Invisible Sim Say To Make The Sim Red Devil Do This?

We may never know.

After His Tiff With The Invisible Sim, The Sim Red Devil Ran To Another Restroom

Once again, he stopped in front of the sink.

And Once Again, He Was Transfixed By A Soap Dispenser

That Sim Red Devil sure gets weirder by the day, doesn't he?

Later That Night, Another Paparazzo Stood Outside The Sim Kappa Kappa Tau House

The Sim Red Devil jumped out of bed and rushed down to the side yard.

But When The Sim Red Devil Got To The Sim Chanel-O-Ween Maze...

...he realized he was too late.

The New Paparazzo Was Gone

"This isn't over," the Sim Red Devil muttered. "Unluckily for him, I saw his face. And I never forget a face."

"You're the only paparazzo I trust," the Sim Red Devil told Sim Milton. "Who is Sim Dave and what does he want?"

"What's in it for me?" Sim Milton replied.

"I think about it," Sim Milton responded. And with that, he vanished via getaway car.