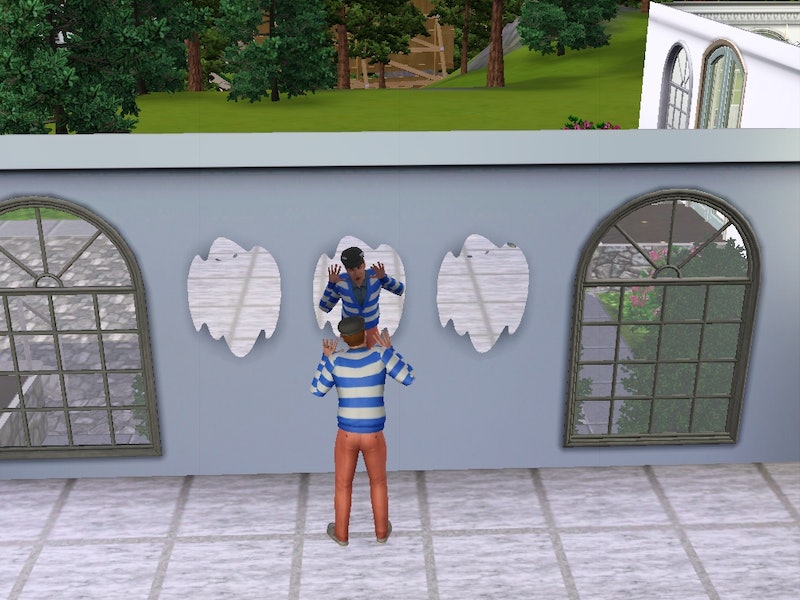 Sim Chanel hated being the lone Sim standing at the helm of of what she deemed a sinking ship, but she was not quite ready to give up her reign. So when Sim Chanel found out Sim Zayday wanted to run for Sim Kappa president, Sim Chanel saw a potential solution.

"Shouldn't we let the other Sim Kappas vote on it?" Sim Zayday asked. She was both surprised by and wary of Sim Chanel's proposition. "Like, this seems sketchballs."

"Nope. Not sketchballs. I just think it'd be neat to work together."

"Who are you and what have you done with Sim Chanel?"

"You caught me. I'm actually a boring and patient and selfless good samaritan in disguise," Sim Chanel deadpanned. "I'm wearing a Sim Chanel skinsuit. Fits like a super hot glove, doesn't it?"

"There's the Sim Chanel I know," Sim Zayday sighed. "Whatever. I guess you won't tell me the real reason why you're into this co-presidency, but I'll just go along with it."

A Few Hours Later, A Mini Flood Happened In The Kitchen

Woo, the Sim Red Devil really had to go, didn't he?

Ugh. I guess I could call a repair technician. OR I COULD BURN IT ALL DOWN.

(I called a repair technician.)

...That The Sim Red Devil Was Typing Away On The Kitchen Laptop!!!

"Wait, do you actually think I want to hear you ramble on about movie ticket prices?" Sim Chanel interrupted. "This is an insufferable tire fire of an anecdote. Can we talk about something more relevant to my interests?"

"You have GOT to see the pair of boxing gloves I bought the other day," Sim Chanel gushed.

"I miss living at the mortuary," Sim Chanel #2 whispered to herself. "I don't know why I ever came back to this place."

"If we're going to catch the Sim Red Devil," Sim Grace explained, "we gotta get a big ol' net. Maybe put a fish at the bottom of the net for good measure."

Sim Grace's Plan Was Only Just Getting Started

"When we drop the net on the Sim Red Devil, we'll take pictures of him," Sim Grace went on. "We'll post the pics online. He'll be so embarrassed."

"And then we can put the humiliating photos on CDs and hand them out to strangers!" Sim Zayday added. "This plan is brilliant."

Sim Chanel erroneously assumed she was the target of this humiliating photo plan.

I will not let these two dingbats ruin my reputation, Sim Chanel thought.

Chanel Summoned The Other Chanels

"Sim Grace and Sim Zayday are out to get the Sim Chanels," Sim Chanel told her minions. "I overheard them scheming an evil scheme. I don't trust them. Or their blank CD plan. And neither should you."

"Then why is Sim Zayday co-president?" Sim Chanel #5 asked.

At Some Point, Sim Chad Dropped By The House

He played peekaboo with his own reflection. As one does.

They'd heard Sim Chanel #2 was home, but they wouldn't believe it 'til they saw her with their own eyeballs.

"Who tweets about the Sim Red Devil wetting his pants, vanishes, and returns in one piece?" Sim Pete asked.

"Actually, it reminds me of something that happened to this very sorority back in the '90s," Sim Dean Munsch replied. "No, it wasn't a tweet. It was an AOL Instant Messenger away message."

Sim Grace could not stop talking about the sun's new pair of sunglasses.

Like, It Was All Sim Grace Wanted To Talk About

Whatever sizzles your bacon, Sim Grace.

Meanwhile, The Sim Red Devil Meandered Down To The Kitchen, Casually Grabbed A Plate Of Waffles, Stared At Sim Grace & Sim Chanel #3, & Crept Back To His Lair

Once again, no one noticed the Sim Red Devil. The Sim Red Devil figured this could only mean one thing: he'd become invisible overnight. He decided he'd go test out his new magic power on the townspeople after he finished the plate of waffles.

Between forkfuls of waffle, the Sim Red Devil looked out the lair window. He spotted the paparazzo walking up to the Sim Kappa Kappa Tau house.

"Him again?" the Sim Red Devil snarled. "Who told him he could lurk around the Sim Kappa Kappa Tau house? WHO IS HE? What's his deal? What does he know and/or want to know? Hasn't anyone told him there's only room for one lurking creep here? I better go set him straight. He needs to leave my lurk zone be."

The Sim Red Devil wolfed down the rest of the waffles, cracked his knuckles, and made his way to the front door.

He had to finish what he'd started the night of the Sim Chanel-O-Ween maze.

Alas, The Paparazzo Refused To Stop & Talk To The Sim Red Devil

"Wait a second," the Sim Red Devil mumbled. "I almost forgot! I'm invisible. He's not ignoring me. He just can't see me!"

The Sim Red Devil waited for the paparazzo to acknowledge the fusion. The paparazzo remained silent.

"Set your spirit free," the Sim Red Devil whisper-sang, "it's the only way to be."

A Car Pulled Up

The Sim Red Devil Tailed The Paparazzo Into The City

Wait, what was this building?

The Sim Red Devil was shocked that no one seemed to be bothered by his loitering.

"Ah yes. It must be because I'm invisible," the Sim Red Devil reminded himself."

As the paparazzo left the hospital, the Sim Red Devil grabbed his shoulder.

"I mean, it's dark out, but I can see you," the paparazzo replied as he yanked his shoulder free of the Sim Red Devil's grasp.

"No. You're extremely visible."

The Sim Red Devil's eyes began to well up with tears. "Then why is everyone ignoring me?"

"Uh, I don't know? Maybe it's the freaky clown makeup?"

Before The Sim Red Devil Could Respond, The Paparazzo Scampered Off

The Sim Red Devil Followed The Paparazzo To A Community Pool

Just as he was about to corner the paparazzo, the Sim Red Devil realized he was too hungry to go through with the inquisition.

"I'll get you next time, paparazzo. Next time," the Sim Red Devil growled.

"Chill out back there, Dr. Claw," the cab driver replied.

Will the Sim Red Devil ever get Inspector Gadget, er, the paparazzo? TO BE CONTINUED.