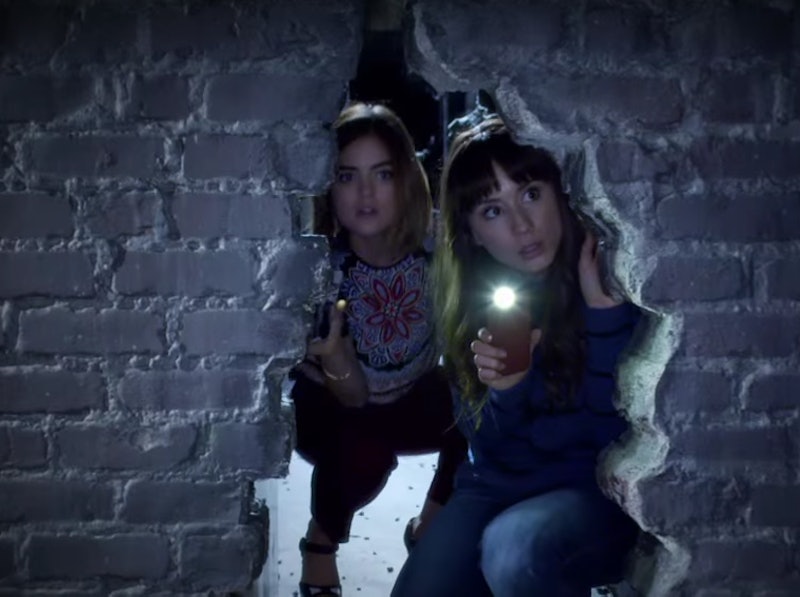 With less than two months to go until we finally get to see the start of Pretty Little Liars Season 6B, the teasers are dropping and, man, do they leave a lot of unanswered questions. Of course, we already know some major plot points, such as the five-year time jump. However, this new preview tells us more info — and leaves us wanting it to be January now.

The video kicks off with the Liars returning to Rosewood, seemingly carefree because they've escaped the burden of their past. Any PLL fan worth her weight in gold can tell you that the second you think you're safe in Rosewood is the second everything goes awry. Don't believe me? Just check out the trailer.

Charlotte and Alison DiLaurentis seem to be on good terms, as the former wonders if the Liars are still upset over everything they endured. We don't see Alison's response, but the trailer does cut to a shot of Mona Vanderwaal (!!!) asking Spencer Hastings if she still has nightmares. Suffice to say that, yes, the Liars haven't forgotten the years of intensity. "It's happening again, isn't it?" Spencer can be heard saying in a voiceover, confirming what we already knew: There's a new A in town.

Other highlights include Aria Montgomery standing in a police lineup (yikes), a gratuitous shot of a man — presumably Hanna Marin's fiance — getting dressed, and a reminder that Ezra Fitz is still pretty stinkin' cranky about something. For a second, we see a blonde man (Toby?) punching a dark-haired man, who I hope is not Caleb. I can not handle the dissolution of that bromance.

In summary: The trailer confirms a lot of what we already knew — flashbacks, intensity, Spencer's bangs — while also introducing just enough questions to keep us intrigued. Ahh, Pretty Little Liars, you saucy minx. You can catch all of the action during the Pretty Little Liars Season 6B premiere on Jan. 12.