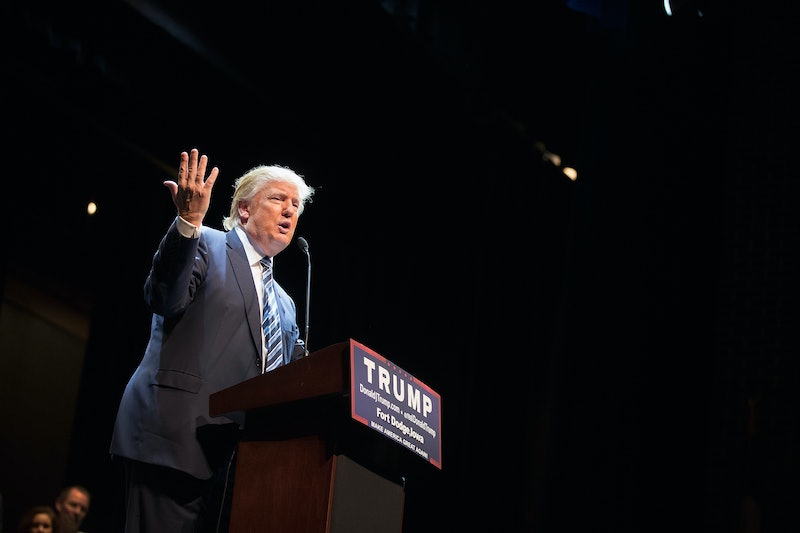 The best part of any debate is hearing thoughtful commentary and important insight on any number of relevant topics from those seeking to lead the United States as its next commander in chief. Just kidding — we all know it's browsing Donald Trump's tweets about the Democratic debate and counting how many times he mentions China. That's where the real action is.

Of course, you could act like a responsible adult and take copious amounts of mental notes on which Democratic candidate has the best foreign policy stance, which one has the best response to the wealth gap, and which one's economic concerns are most in line with the majority of Americans, but that would be boring. I didn't sign up for a Twitter account to hear other people pontificate on the meaning of life or ways to achieve peace — I signed up for cat videos and angry presidential candidates' 140-character thoughts about my uterus and my "poor" Chinese ancestors!

In all seriousness, conservative Trump seems to have outdone himself once again, keeping in line with his tradition of live-tweeting the Democratic debates in order to correct rival Democrats on a litany of sensitive topics, including (unsurprisingly) the wave of extremist attacks that swept through the capital city of Paris in France on Friday. While Trump mainly stuck to re-tweeting other's opinions, he made sure to throw in a few barbs of his own.

Trump first aimed his ire at CBS itself:

Re-tweeting a supporter, Trump confirmed that he too believed CBS was a "major fail." How will they EVER recover from that burn, Mr. Trump?!

... And then retweeted this super original thought on the night's debate festivities:

Not a "circus!" Anything but a circus!

Trump also bragged that beating Democratic candidate Hillary Clinton in a debate would be "easy":

I agree with you on this one, Trump. It would be easy for you to beat Clinton for the title of "Most Incoherent Candidate At The Debate." Wait, sorry — that's not what you meant?

After former Maryland Gov. Martin O'Malley called Trump an "anti-immigrant carnival barker" (take a moment to laugh hysterically with me), the billionaire mogul hit back by calling O'Malley a "clown." Someone get O'Malley some ointment, because that was a sick burn! Just kidding. C+ for effort, Trump.

The most insensitive and baffling moment of the evening:

Of course Trump weighed in on the Paris attacks. Did you really think he woudn't? I'm still not sure whether this was supposed to be entirely unrelated to the debate or not, but it was entertaining to watch Trump digitally spar with someone who wasn't on the debate stage nonetheless. You know, to spice things up a little.

Of course, no Trump live-tweet would be complete without a set of ironic statistics:

Toward the end of the Democratic showdown, Trump tweeted that the real unemployment rate was much higher than the Obama administration let on, citing black youth unemployment as particularly high. While he's not wrong, Trump conveniently forgot to mention that a Center for Economic and Policy Research report in February this year found that even four year college degrees do very little in the way of offering job security or opportunity to black young adults. According to the study's authors, racism and discrimination played a heavy role in the climbing unemployment rate among black youth and young adults, which, when compounded with a litany of other issues, kept the numbers from ever rising. Trump, with all his racist, anti-immigration, anti-Black Lives Matter arrogance, simply couldn't (or wouldn't) put two and two together during Saturday's live-tweet.

Despite ending the evening on a serious note, Trump's Democratic debate live-tweet was generally (and unintentionally) hilarious, as always. Thank you, Mr. Trump, for not letting us down.