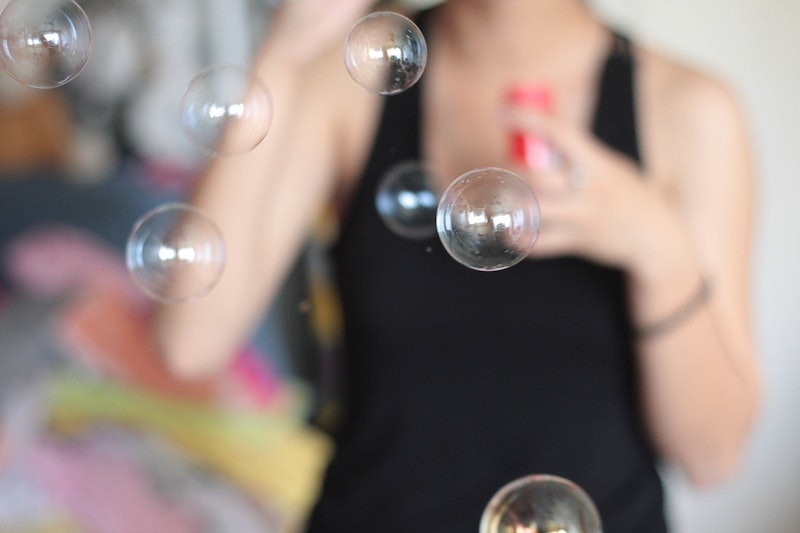 If I could speak to my younger self — if I could give her any piece of advice — I would always tell her the same thing: stop worrying so much. When I look back on my life, the only thing I ever regret is having done just that: worried endlessly, and pointlessly. I can think of all the simple days I didn't enjoy because I was caught up obsessing over something that really didn't require that much mental attention. Often, it was over something that would just work out on it's own, but usually, it was just entertaining negative thoughts not to prepare for certain outcomes or be realistic, but just, you know, because. Because I wanted to worry and I thought I was making myself safe.

I was not doing anything but wasting my days. I could not beat fear to the finish line. I could not dream up all the terrible things people could think about me and then be shielded from how they'd hurt, just because I told myself first. I could not accomplish everything, I could not juggle every ball, I could not be every single thing I wanted to be, but what I found in the wake of that realization is that I never wanted to be, anyway. All I wanted was to have the few things that really mattered to me, and when I felt like that was impossible, or I was undeserving, I looked to have more and more, rather than to just fix what was really wrong.

The point is that you don't have to take everything so seriously. You don't have to try your best at everything. You're allowed to fail because you just didn't work hard enough. That happens, but we're so infrequently forgiving about it, we put ourselves through emotional stress unnecessarily. The point is not, and has never been, to do everything flawlessly and effortlessly. It is, however, always been about deciding what matters most to you, and going after it no matter what. Here are a few thoughts to help you do that better, and let go of everything that doesn't actually matter in the end.

You Probably Don't Actually Want To Have It All

Wanting "it all" is usually a supplement for feeling like you're incapable of having what you actually want, which is, more often than not, simple: comfort, safety, love, and so on.

If It Won't Matter In Five Years, It Probably Doesn't Require More Than A Few Minutes Of Stress Or Thought

This isn't to say that you shouldn't be looking forward to the future or planning for said five-years-from-now, but that if it won't matter to you in the long-run, it's probably not worth too much time or attention now.

Whatever you want to end your life knowing you did best — worked hard, loved others, made an impact — is a good indication of how you should spend the majority of your time.

Every time you feel like you're not successful or aren't doing as well as you could be, you're probably only perceiving that through an idea of what you imagine other people think about you. That is to say: it's likely all in your head. The antidote is just realizing that nobody is actually thinking about you as much as you are thinking about you — they're too busy thinking about themselves.

When You Focus On What Actually Matters, You Won't Have Time To Entertain Anything Else

The ironic truth is that when you figure out what you really, sincerely care about, everything else will kind of dissolve out of seeming important to you. You won't have to actively "try" to ignore the BS in your life — it will feel like second nature.