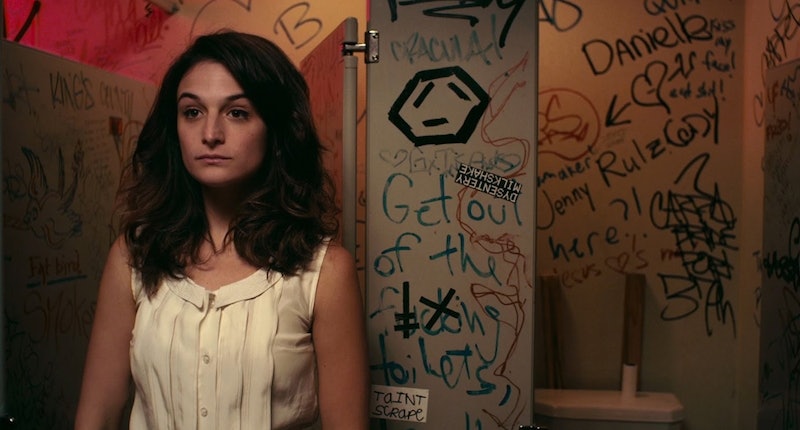 Earlier this week, I bought a pregnancy test because I thought I might be pregnant. I’m on the Pill, but somehow, my period was late ― about seven or eight days late. And all of a sudden, there I was, standing in the pregnancy test aisle in a pharmacy in Paris, wondering which brand would give me the most bang for my franc.

Of the two pregnancy tests I'd taken in the past, one came out negative, and one didn't. That second time — a little over 10 years ago — I chose to terminate, for all the reasons someone my age and in my precarious financial position at the time might want to. But mostly, I didn't want to have a kid because I still felt like a kid myself.

While I may be in a different place now ― older, more financially secure, married to a supportive partner ― I’m still pretty much the kid I was then. Let’s just say maturity isn’t my strong suit. So when my period was over a week late this time around, I groaned aloud and said, “Not again.”

Luckily, I found out I wasn't pregnant; I also found out that you're never too grown-up to have a good old-fashioned pregnancy scare. From start to finish, these are the 18 stages of thinking that, just maybe, you've accidentally popped a bun into your oven.

1. Realizing You Haven’t Had Your Period In Awhile

Or at least it feels like awhile. It feels as though I haven’t dealt with it in months, but that can't be right. Right? I think it should be here by now. Maybe?

2. Trying To Figure Out When You Last Had It

If only I was better at record-keeping. Looking back at my calendar, I wonder if I last had it before or after Easter. If I could unravel that mystery, then I could either be a little less scared ... or a lot more scared.

3. Realizing It Was Definitely A While Ago

After much obsessive calendar-reading, I finally remember coloring Easter eggs over FaceTime with my nephews when I last had my period. So, I had it just before Easter.

Which leads me to realize that I hadn’t skipped or missed any pills, but still … that doesn’t stop the fear.

Am I just bloated because I decided to eat four croissants at breakfast today, or is it something else? Am I pregnant with a croissant baby, or another kind of baby?

6. Looking At Your Stomach In The Mirror From Every Angle

I examine it as I slowly turn in front of the mirror, so every inch of my abdomen can be inspected for possible growth. I don’t see any changes, but I mean, would I really be able to?

I try to pinpoint whether the feeling roiling my stomach was nerves, morning sickness, or too many croissants. I just can't tell.

Having already terminated one pregnancy in my life, I am not eager to go for round two. I can just imagine the disappointment of some of the people in my life, who would very likely say that since I'm more grown-up and married now, I'm not allowed to have an abortion. Oh, the arguments that would follow.

I don't believe in any god. But that doesn't stop me from pleading with every god. Whether it was a sun god, a god of the rains, or a god who keeps women from conceiving, I make impossible promises to them about how I'll never ever have sex again, if only my period would just show up already.

10. Blaming Yourself For Being So Dumb

I’m not usually one to blame myself, because think blame is meant to be passed around like a plate of canapés; but having gotten pregnant on the Pill before, it just makes sense to blame myself for not using a more foolproof method of birth control. At least if my IUD had failed, I’d be blameless.

11. Trying To Decide What To Do If You're Actually Pregnant

I know being pregnant would give me permission to eat the whole pizza and not share it, which is cool. But what about the 18 years after that? I'd have to share that pizza then ... among other things.

Nope. Can't do it. Plain and simple. If I'm pregnant, I'm absolutely getting an abortion.

12. Getting A Pregnancy Test

I am very reluctant to get the test, because I keep hoping that my period will just appear. But when it still refuses to show, I cave and head to the pharmacy. Once there, I panic, and think that by bringing the test into our home, we are inviting disaster. I suggest to my partner that we put it back on the shelf and just go home to drink lots of wine instead. My partner insists we get it over with.

Because what else am I going to do? I have to prepare myself for the worst. Also, maybe the wine will cushion any panic or disappointment that might come my way.

14. Staring At The Test For Almost A Full Hour

I go from blaming myself to blaming the test for even existing in the first place. I read the test's directions twice. My partner reads them twice, too.

15. Heading Into The Bathroom

Having to pee on a stick for a five seconds doesn’t seem like a long time, but it is. I can hear my partner counting on the other side of the bathroom door as I try to focus my aim. It feels like it goes on forever.

16. Waiting For The Results

My partner and I stand over the test, glaring at it, while complaining that it is taking too long. Who knew three minutes could be so damned long? This little stick is distorting the very nature of time itself.

17. Preparing For The Worst

Once those three minutes are up, my life might completely change. This leaves me both panicking again, and reevaluating my previous decisions. I feel sick to my stomach and anxious, as I prepare for the worst.

Seeing "not pregnant" pop up on the digital screen of that test brings on a wave of relief. I can breathe again, knowing that I wouldn't have to get another abortion, and my partner and I could go on living our lives as planned. We are still free.

Although my period is still MIA, so I guess it didn't get the memo.