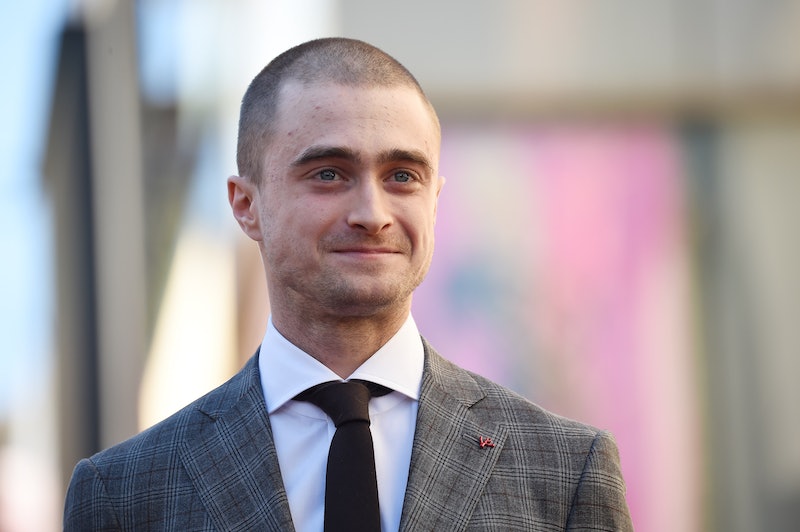 If there's anyone who knows what it's like to literally grow up in the spotlight as the star of a major motion picture franchise, it's got to be Daniel Radcliffe. The Harry Potter star won the titular role when he was only 11 years old, and he spent nearly the whole of the next decade portraying The Boy Who Lived in a total of eight movies. It had to be difficult, but it was also likely a lot of fun. Because of this, he's the perfect candidate to mentor upcoming stars, and Radcliffe has advice for new Star Wars: The Force Awakens actors Daisy Ridley and John Boyega as they join the legendary franchise — and it's definitely worth listening to.

While accepting his star on the Hollywood Walk of Fame on Friday, Radcliffe offered some words of wisdom to Ridley and Boyega, both 23, as they enter into such a legendary franchise. The general gist of Radcliffe's advice is that they should remember to have fun and not take any of the experience for granted. After all, entering into such a behemoth series in the entertainment world comes with plenty of perks, and is an amazing opportunity for any actor. Said Radcliffe,

“Just enjoy it. There’s some weird thing that I think people feel about franchises, where they’re like, ‘You do that so you can do other cool work.’ — franchises are fun! You get to do stuff in franchises that you don’t get to do when you’re doing little indie movies. You get to do stunt sequences and crazy action stuff. It’s a lot of fun!"

Without a doubt, Star Wars will serve as a launch for Boyega and Ridley's careers in a wider sense. Both have held smaller roles in the past — Ridley had small parts in several TV series in her native England, while Boyega has appeared both on TV and in films — but none hold a candle to their lead roles in The Force Awakens. And while Episode VII hasn't even been released yet, they're already due to start shooting Episode VIII in the coming months, with Episode IX being confirmed down the road, as well. In other words, their futures certainly look bright.

Radcliffe himself used Harry Potter as a catalyst for exploring more exciting roles in his adult career. It's certainly worked out well for him, and it could just be the same for Boyega and Ridley. In the meantime, as Radcliffe pointed out, it's worth it to just enjoy it — advice they already seem to be taking.