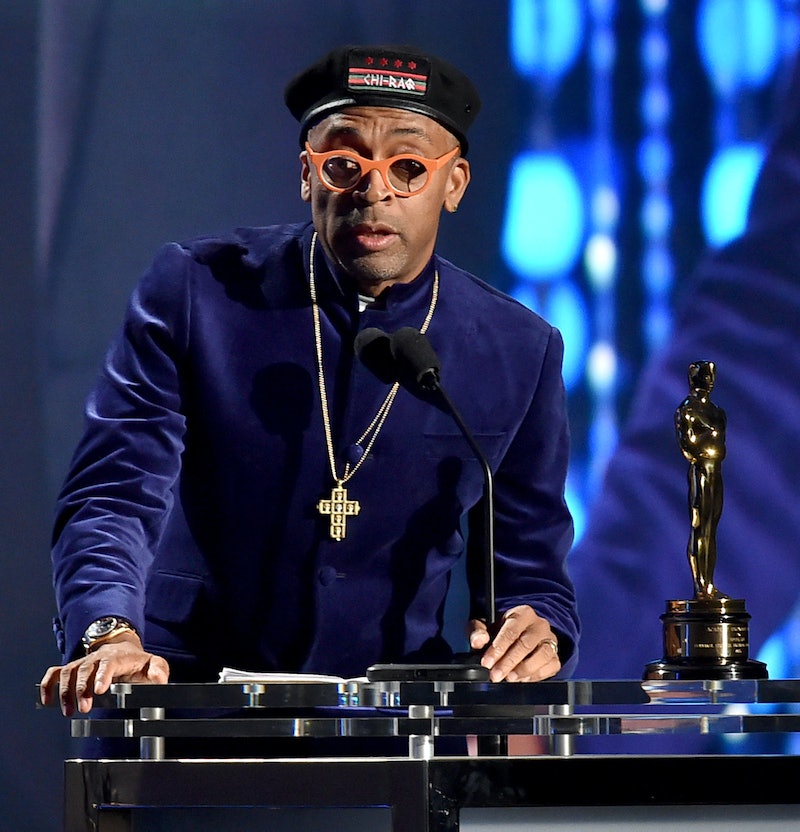 Before the Oscars make their way onto our TV screens come February, some of the film industry's finest came together for the Governors Awards. Now in its seventh year, the prestigious ceremony helps pave the way for film professionals who might soon be honored by the Academy, and at Saturday night's show, some of the industry's biggest and brightest stars took the stage as honorees. It was a speech by Spike Lee about Hollywood's lack of diversity, though, that was the show's most memorable moment.

Lee's speech wasn't the only highlight of the show; honorees for the night included the legendary Gena Rowlands and Debbie Reynolds. However, it's no surprise that the often provocative, blunt, and outspoken Lee was the standout of the night, thanks to his lengthy but inspirational speech about diversity. While accepting an honorary Oscar, Lee took the time to not only thank all of the people who helped bring him to the successful place he is today, but he offered thoughtful insight about the lack of diversity in the entertainment industry.

A man of many anecdotes, Lee utilized every second of 17-minute speech to illustrate his points. He integrated humor with his own story, highlighting the importance of hard work and perseverance in order for non-white actors and filmmakers to excel in this industry. His speech was eye-opening and thought provoking, and as timely as ever; in 2013, minorities had just 16.7 percent of lead roles in 174 films released that year, according to a UCLA study on Hollywood diversity, and other stats are just as discouraging.

So Lee's speech was incredibly important, and well worth the watch, both for its discussion of diversity and other subjects close to the filmmaker's heart. If 17 minutes is a bit too long for you, I've comprised a list of the most important takeaways from the speech that'll tell you everything you need to know about the most important moment of the Governors Awards.

1.) There's A Major Lack Of Diversity In High Positions In Hollywood

This is the main point of Lee's speech. He stated that he has noticed a huge disparity in terms of diversity in many major Hollywood studios, which then gets reflected in the films they produce and people they hire.

2.) Standardized Testing Doesn't Determine Your Worth

We all went through the various ACT/PSAT/SAT prep books, sacrificed our Friday night plans, and woke up obscenely early to try and get a numerical score on a piece of paper that would determine where we would go to college and what our futures would be. It's pretty twisted to think about, when you realize that one set of numbers can have such a big impact on the rest of your life. In his speech, though, Lee made the important point that although these tests may be important at the time, they should in no way, shape, or form determine our worth. We are more than numbers, and should be judged on other factors when it comes to measuring success.

3.) Being the Same Will Not Be Enough

This comment was targeted towards minority students going to school in America, and unfortunately, it is valid. Lee told an anecdote about how his parents told him from a young age that he would have to work harder than his white counterparts in order to be successful, and although it is sad, it is still true today for many non-white students.

4.) There is No Such Thing As An Overnight Success

Unfortunately, we cannot become superstars overnight. Every good thing takes time and a lot of hard work. Lee didn't beat around the bush regarding this fact, and it is important that everyone knows not to give up when the going gets tough. Perseverance is always key.

This country is going to look a lot different, diversity-wise, years down the road, and Lee shined light on this fact, not holding anything back. He connected this to the lack of non-white members of big businesses, in and outside of Hollywood, and how executives need to "wake up" in terms of hiring diverse employees, because progress will be, and already is, taking place.

6.) The Entertainment Industry Is Behind The Sports Industry

Lee has a big point here. While there is a large amount of diversity in the different major sports teams, both collegiate and professional, the same cannot be said of Hollywood. If the sports industry can be so forward thinking, then what is wrong with the entertainment industry?

Lee made the point that it isn't all bad; America has made significant progress, and he used the popular example of our nation's president to illustrate this point. However, that doesn't mean that there isn't the need for a lot more change to come.

Celebrities like Lee, who use their talent and fame to inspire, teach, and encourage other people, should be applauded across multiple stages. The filmmaker used his time in the spotlight on Saturday to bring up many valid points about the need for diversity in Hollywood and the changes that should be made to ensure equality. Hopefully, the rest of Hollywood was listening.