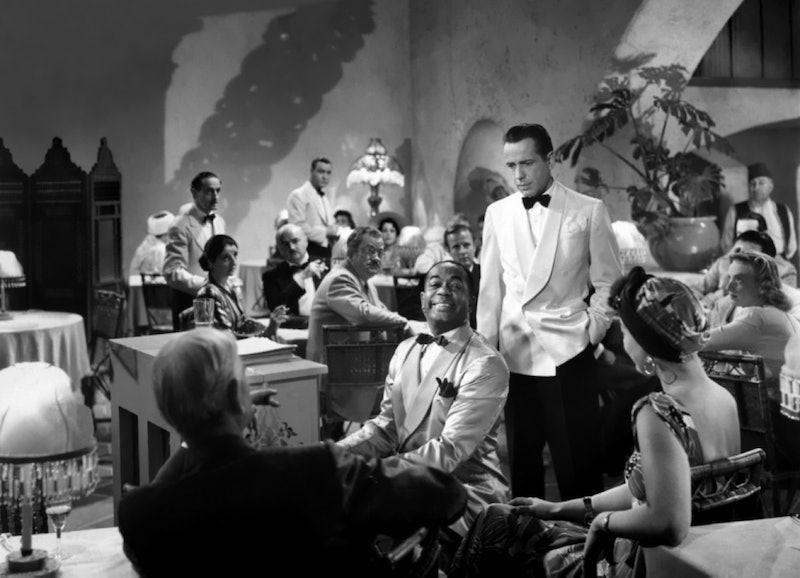 In the wake of tragedy, the indomitable nature of the human spirit always shines through. With the world still reeling from six coordinated terrorist attacks in Paris that occurred on Friday, Nov. 13, people are showing their love and support in tributes, tweets, and by sharing a stirring scene from the 1942 classic Casablanca about France. What does this Casablanca clip have to do with the recent attacks? More than you would think, and people are passing along an iconic scene on their social media pages for the best possible reason.

If you're unfamiliar, Casablanca, set during World War II, takes place almost exclusively in Rick’s Café Américain in Morocco. Humphrey Bogart stars as Rick, an American ex-pat whose café is a safe haven for people displaced by the war. Many of those people are French citizens trying to make their way to the safe haven of America. While Rick proclaims himself to be neutral, it is clear where his loyalties lie.

When a conversation between Rick and Laszlo, the husband of Rick's former lover Ilsa, is interrupted by Nazi soldiers commandeering the house piano to sing the German patriotic song "Die Wacht am Rhein," Laszlo goes downstairs and demands the house band play "La Marseillaise," France's national anthem. The band looks to Rick who gives a nod of permission, and led by Lazslo, the entire room full of patrons sing until the Nazis can no longer be heard.

For a moment, everyone in the cafe is united as one. No matter where they came from or what their story is, they stand together to sing "La Marseillaise." At the end of the song, tearful shouts of Viva la France are heard.

The scene has always been an iconic moment of defiance in the face of terror, but in light of the attacks on Paris, the scene is more powerful and relevant than ever before. In the wake of such tragedy, it is hard to know what to do, or to find the right words to say. People are sharing this remarkable cinematic moment from Casablanca because it speaks to what is in everyone's hearts. No matter what country you are from or how close or far away you were from the attacks, you can let the people of France know you stand with them. When enough voices speak together with love and support, the good in the world cannot help but outweigh the bad.

The moving scene is on YouTube and is easy to share. Watch it below and if it moves you to tears, know that you are not alone. Art, like people, always seems to endure even in the darkest of times.