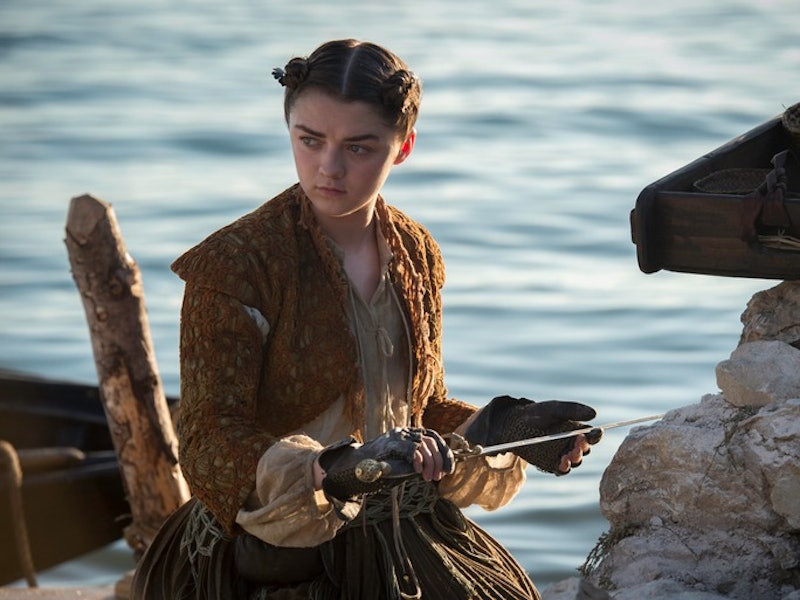 If Daenerys Targaryen thought she was the only mother of dragons in town, then she had better watch her back. In the real world, Game of Thrones -inspired baby names are on the rise. UK kid-centric site Baby Centre recently did an office poll for fun to predict the top baby names of 2016 and they put Khaleesi at #23 on their list of baby names for girls. Their poll was totally unscientific, but not far off base. Official baby name reports for 2014 found 53 real life bundles of joy dubbed Khaleesi in the UK, while 244 little Aryas were welcomed into the world. On the boy side there were 18 Theons and 17 Tyrions. Remember, that's just the UK stats for 2014. Stateside, there were another 241 little girls named Khalessi born in 2013, according to the Social Security Administration. In other words, don't be surprised if the Baby Centre folks are right on the money when the 2015 names data comes out.

While I know many people frown upon people naming their children after TV characters (although, I would argue these are technically literary characters), I am not totally opposed to the idea. Granted I don't have kids, but I do have two cats named Khaleesi and Sansa, and they seem well-adjusted enough. If you feel strongly enough about a character, why not give your child a name inspired by him/her?

If you are looking to the world of Westeros for inspiration, I might steer clear of Khaleesi, since there is a good chance your kid will one day be in a class with 37 of them, but I do think these 11 Game of Thrones character names would be perfect for any baby — especially one destined to grow up with a love for fiction.

Imagine your future daughter's reaction when you tell her you named her after an honorable, badass lady knight. There is no way she is not going to immediately feel powerful and awesome. Brienne is an amazing TV and literary character, and while the name is just rare enough to be unique, it's not weird in a way that will scar your child for life.

I just don't think you can go wrong with a noble warrior's name, OK? Robb was heroic, brave, and true. Sure, that extra "b" looks extraneous, but it also makes the name stronger.

Arya is already popular because it is a straight up gorgeous name. If your intent is to name your child Arya after young Arya Stark then don't let anyone stop you. Arya is a complicated character, but she is also quite possibly one of the greatest ones in recent history, so let the haters hate if they want to, because your kid has one cool namesake.

Oh, what a sweet summer child Renly was. Idealistic, kind, and let's face it, too precious for the world of Westeros, Renly would have been a benevolent king. His name also happens to be lyrical and perfect for a boy or a girl.

For some reason, Ygritte hasn't taken off as a baby name. Since the character is no longer on the show, this is the perfect Game of Thrones name to choose if you want to go for something wholly unique. As an added bonus, you could totally nickname your daughter "wildling."

According to Ancestory.com, Mance is a fairly common surname, so you can always tell people it is an old family name if you don't want to cop to naming your kid after a TV character. To me Mance makes a terrific choice because of how passionately the character cared about being free. Is there any greater value to instill in a child then an appreciation for freedom?

Game of Thrones answer to Helen of Troy, Lyanna's heart started a war that tore the kingdoms apart and may have produced Jon Snow. Ned once said Arya reminded him of Lyanna, which means his sister must have been as fierce as she was beautiful.

House Tully's words are "Family, Duty, Honor" — what a beautiful sentiment to put behind a child's name. This is another name that would work for a boy or a girl. Bonus points if you name your child Tully and they are a Pisces.

I'm not sure there is a kinder soul in all of Westeros than Meera Reed. Wise beyond her years and unwavering in her loyalty, she is an amazing character with a lovely name that will only be immediately recognizable to hardcore fans.

Fine, Samwell is a little weird, but the character of Sam is a true friend, he's smart, and just a genuinely kind human being. You can always call your kid Sam, with the "well" part being a family secret.

Sansa has been to hell and back, but her strength is unwavering. She is a poised, brave soul and her name is perfect for a little girl... or your next fur baby.

See, I told you some Game of Thrones names translate beautifully in the real world. Now go forth, and make George R.R. Martin proud with your progeny.