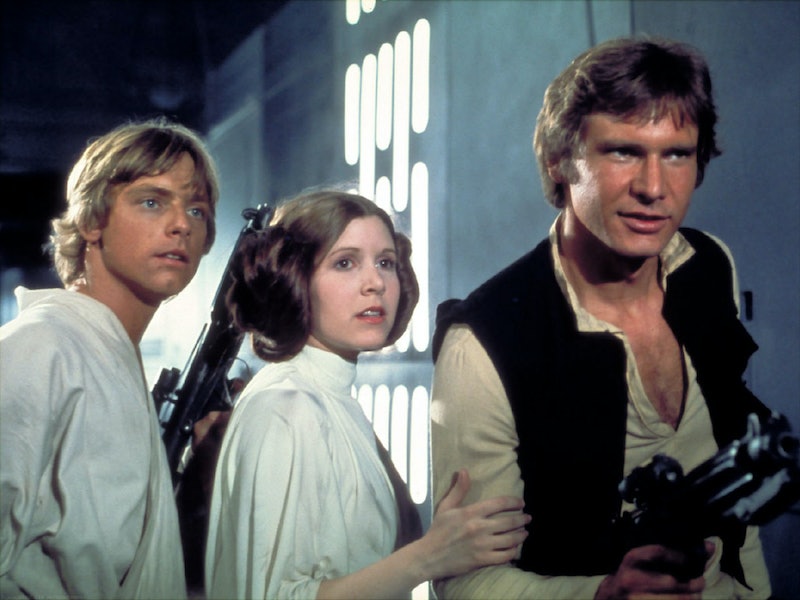 Earlier today, I was googling things about Star Wars: The Force Awakens (because that's how I like to spend my free time) when suddenly, bam! I realized, I have a major blindspot about the Star Wars universe. Yes, it's true that me, the Jedi lovin', ewok costume wearing, Star Wars superfan completely forgot all about the upcoming Anthology films. I don't know if my mind has been too cluttered with anticipation for The Force Awakens or if I have been spending too much brain power on trying to build my own BB-8, but regardless of how it happened, I decided to right this wrong. I now know everything to know about Rogue One: A Star Wars Story , and lucky for you, I have decided to share my findings.

Because it's coming soon. A teaser for Rogue One is even rumored to be the post-credits scene for Star Wars: The Force Awakens. So if all this information wasn't already interesting enough, it is now super vital to know, so you don't look like a stuck up, half-witted, scruffy-looking nerf herder (yeah, you heard me). You don't want all the other stormtrooper-clad theatergoers judging you for your lack of knowledge on opening night, do you?. That would be mighty embarrassing. So let's start with the basics.

What The Frick Are The Star Wars Anthology Films?

When Disney acquired Lucasfilms, a plan was formulated to produce a new trilogy of films that dealt directly with the story of the Skywalker family. In addition to these primary films, three anthology or stand-alone movies would be released during off-time in production. Rogue One: A Star Wars Story is set to be the first of these films. The second film, set for release in 2018, will follow a young Han Solo before he crosses paths with Luke Skywalker and Obi-Wan Kenobi. The final of these anthology films will focus on Boba Fett, and not too many details have been released about this third proposed movie.

Who Is Involved Here?

Little has been shared about the characters in Rogue One, but the film is reportedly said to have an Ocean's Eleven vibe. Felicity Jones, Diego Luna, Alan Tudyk, and Riz Ahmed are all set to be starring in the film, directed by Gareth Edwards. Edwards got his start working in digital effects, specifically for English shows like Nova, Perfect Disaster, and Heroes and Villains. His most famous work to date was directing the 2014 Warner Bros. reboot of Godzilla. As for the script, Rogue One was written by Gary Whitta (writer of Book of Eli and After Earth) and Chris Weitz (writer and director of The Golden Compass).

When Is This Happening?

The first anthology film, Rogue One is set to be released on December 16, 2016; filming began near London in early August 2015. So essentially this film is happening right this very second.

Where Does It Fit Into The Star Wars Universe?

Rogue One is set to take place between Star Wars Episode III: Revenge of the Sith and Star Wars Episode IV: A New Hope. The plot follows a gang of Rebel fighters who band together to steal the plans for the Death Star before it can be used by the Emperor's rule. Those vital rebel plans that Princess Leia puts in R2D2 at the beginning of A New Hope? It's safe to assume they came from the mission depicted in Rogue One.

Because new Stars Wars is always a good thing (unless we are talking about Episodes I-III. Those don't count).

In my opinion, the more Star Wars the merrier. So bring it on, Rogue One: A Star Wars Story. I'm ready.

More like this
'Avatar 2' Now Has A Teaser Trailer & Release Date
By Jack Irvin and Alyssa Lapid
The 'Hocus Pocus' Sequel Finally Has A Release Date & It Makes Total Sense
By Shannon Barbour and Radhika Menon
What Does Doctor Strange’s Third Eye Mean?
By Arya Roshanian
Elizabeth Olsen's Chris Evans Friendship Update Was Accidentally Hilarious
By Grace Wehniainen
Get Even More From Bustle — Sign Up For The Newsletter