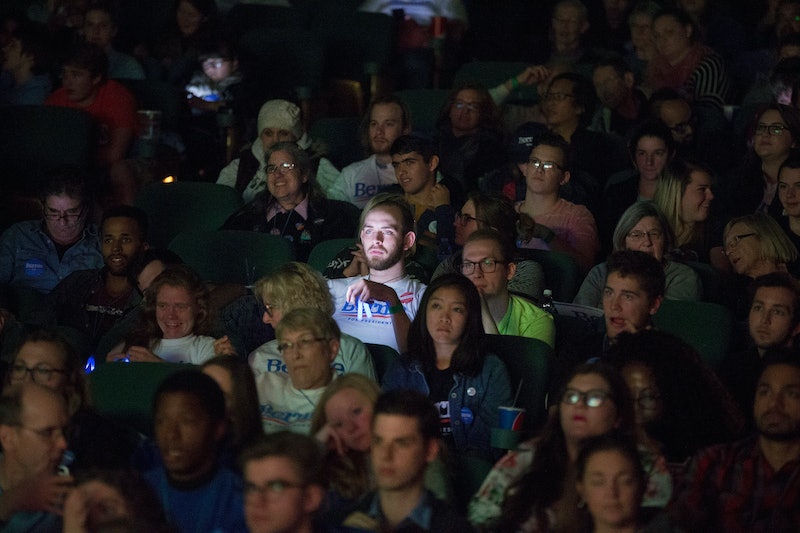 I had the pleasure of press access to the Democratic presidential debate on Saturday night, which meant that I was on Drake University's campus for around 15 hours (yes, there was a lot of coffee involved). The experience was amazing in part because I saw all sorts of different people -- people who you might only ever see all together at a political event like this. I love people-watching, so this was basically heaven for me. So what kind of people come to a Democratic debate? Glad you asked! I think I'm now about as close to an expert on this particular subject as a person can be. You really do see an interesting crowd at such events, and the second Democratic debate was certainly no exception.

Nearly everyone I saw was pretty excited to be there. There were many reporters who seem to go to every debate, or who cover a certain candidate and go to most live events that candidate attends. There were also a couple of first-timers like me there (solidarity!). I saw plenty of supporters out with bells and whistles, chanting for their favorite candidate and holding up campaign signs high and proud. And then there were some folks nobody would expect to see. Hint: There was the world's cutest dog making the rounds of the spin room.

They're everywhere you look; they must have the ability to teleport. The are everywhere all at once, always taking notes by hand ten times faster than I can even type. They also aren't afraid to throw an elbow or two to get the best photo.

All selfie lovers (and I include myself in this group) would feel very at home at a debate. People just love to take selfies at these things, especially if they can get one with their favorite candidate. Say "cheese!"

At least at Drake, we were lucky enough to get to meet Griff, the official live mascot of the school. I was told that Griff is running for president as a third-party candidate. Vote for Griff!

Among the notable folks in attendance on Saturday evening was professor and philosopher Cornel West. I would love to see if anyone snagged a selfie with him!

There were some loud and proud O'Malley, Clinton, and Sanders supporters at or near Drake's campus Saturday night. The O'Malley crew had a chant which included a group cheer that spelled out O'Malley's name, complete with the apostrophe.

The Living Statue Of Bernie

Yep! There was a huge, moving statue-type figure of Bernie roaming around Drake. I didn't get a chance to see the guy myself, but he was the talk of the spin room before things got rolling.

All in all, it was a solidly rowdy crowd of political enthusiasts. If you go to any of the future debates, keep your eyes peeled for adorable pups and perfect selfie opportunities.