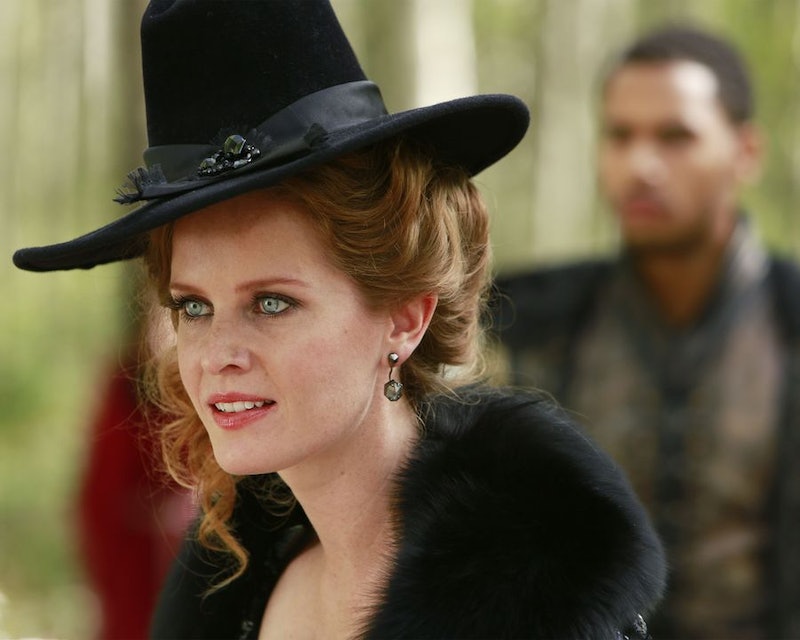 This season on Once Upon A Time, the true-love relationship between reformed Evil Queen Regina and outlaw Robin Hood was complicated by the revelation that Regina's wicked sister, Zelena, was going to give birth to Robin's child. In this week's two-part episode "Birth/The Bear King," Zelena gave birth early to a baby girl on OUAT after her pregnancy was accelerated by Emma. Snow White, David, and Regina attempted to protect Zelena's daughter thinking Emma would use the baby's cries in a spell to destroy light magic with the newly-reforged Excalibur.

However, when Emma swoops in and kidnaps Zelena instead of the baby, her true plan comes to light: She wants to transfer the dark magic from herself to Zelena, then vanquish the darkness — and Zelena along with it. It seems that even if Emma is imbued with the power of the Dark One she can't fully suppress the savior in her, and this plan is more on the side of good than evil, unless you're Zelena, that is.

Unfortunately, Regina is still protective of her sister, believing that the only person allowed to hurt the Wicked Witch is her. But, Emma reveals her true plans to kill Zelena and the darkness along with her, and insists that, deep down, Regina knows she'll be happier without Zelena to complicate her relationship with Robin. Of course, with Zelena out of the picture, Regina and Robin could raise her daughter as their own, dashing the Wicked Witch's plans to raise the girl in her image — and with her own loyalties.

However, since Regina has officially made camp with Robin on the hero's side, she doesn't want Emma to hurt Zelena, even if it may make her family a lot less complicated. Although those of us that just want Robin and Regina to live happily ever after without anymore drama are disappointed Zelena will continue to make her sister's life difficult, it's great to see that Regina's transformation from the Evil Queen to good person is essentially complete. Anyone who can deal with Zelena is certainly a hero in my book.