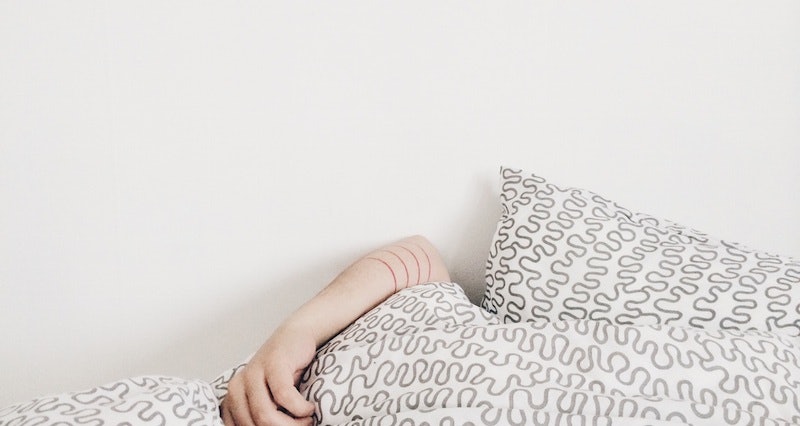 As somebody who, for most of her school years, got up at ungodly hours for sports practice, I'm a morning person by habit. It's hardwired into my system; I feel guilty if I sleep beyond 9 a.m., even though I often keep late hours. And it's true: you do get a lot more done if you're up pre-dawn, creeping around reading the news and doing your laundry before most people even start stirring. But is it all about cramming more into the day? Or is there good scientific evidence for the health benefits of being a "morning person"? It turns out that there is.

A lot of practical advice for "hacking" your life so that you can wake up earlier is based on the very basic idea that the corporate 9-to-5 world is based on a morning-heavy schedule. And we all know the stories of the legendarily productive people who can get by on four or five hours of sleep a night; it seems to be a prerequisite for being president, for one thing. But if you're a dedicated slugabed (a fantastic word from the 1500s for a chronic lover of sleeping in), there may be good scientific reasons to heave yourself out of bed progressively earlier, until you're no longer seriously alarmed by seeing the sunrise.

It's not for everybody. If you're a creative person, chances are strong that you'll be a night owl instead of an early riser, a habit likely carried over from your teen years — and, hopefully, you work in an industry that allows a sleep-in. The jury remains somewhat out on whether we're born morning people or night people, or whether we can hack it to our advantage — but if you're inclined to like the mornings anyway, an earlier wake-up call might be to your benefit.

1. You're Less At Risk Of Sleep Inertia

There's a phenomenon called sleep inertia that actually makes us into genuine zombies in the morning after waking up. It's that groggy, cotton-wool feeling that we encounter when we're dragged out of sleep by artificial means, like alarm clocks. What you suspect is actually true: you really aren't fully awake yet. Your body hasn't awakened naturally, and you have impaired functioning on even the most basic levels for about 30 minutes to two hours.

The risk with this sort of thing is that you can actually hurt yourself quite badly by being part-conscious, or at the very least forget your presentation or your socks or something else vital as you bolt out the door. If you're working a 9-to-5, the New Yorker reports, causing sleep inertia by waking abruptly and too close to work time will cut into your productivity, memory, attention and other important mental functions. It's termed "social jet lag". Gradually training yourself to wake up earlier gets you out of this fugue state before you have to clock in, according to sleep scientists (and a hilarious experiment done by Medium journalist Kevin Roose) will benefit your health and work.

2. Your College Grades Will Be Better

In one of the most famous studies on morning people versus night owls, a 2008 study by Texas University found that naturally getting out of bed early is a recipe for better grades in college. The experiment involved 824 undergraduates who were asked about their sleeping habits and then had their GPAs assessed. The result? College kids who get up early average a full GPA point higher than their late-partying counterparts: 3.5, as opposed to 2.5.

Of course, it may be a chicken-or-the-egg problem (which comes first, the high grades or the early rising?), but it's also got clear effects for later success. A good GPA means a good job, and higher earning potential — and that means you're more likely to be healthy.

It turns out that the times of day (or night) where you get things done can also have big influences on your eating habits. Whether from social pressure, the influence of better self-control, or just the fact that fast food joints are the ones open late at night, people who get up early eat fewer calories and more fruits and veggies than those who stay up late, according to a clinical health psychologist at Northwestern.

This interferes with the ideal schedule of eating for health: it's best, according to LiveScience, to eat the majority of your calories in the early morning and middle of the day, not at night, because your body feels "full" more slowly after sunset, causing overeating. Morning people who get a proper breakfast, it seems, are giving themselves an edge over night owls nabbing a takeout at 1 a.m.

One of the biggest proponents of being a "morning person" as a psychological and health benefit is the researcher Christoph Randler. He's done a bunch of studies that show that being a morning person is actually a pretty great thing all-round. But perhaps the biggest benefit, according to his landmark 2009 study, is that morning people are more proactive.

Proactivity is actually a psychological term that means you're more likely to actively create your own situations and circumstances, rather than sitting passively and waiting for things to happen to you. It's about planning ahead and tackling problems before they really start to flourish. Morning people are also better at self-starting rather than needing constant supervision. It's an asset, particularly at work, where proactive employees are more likely to get positive performance reviews.

5. You're Less Likely To Suffer From Depression (If You're Already A Morning Person)

Here's a news flash: morning people and night owls have different psychological profiles. I know, big surprise. But it turns out that morning people might be less vulnerable to certain mental health risks than night owls: they report lower rates of anxiety and depression, according to a 2014 study out of Barcelona. And it's possibly down to physical brain structure.

Compared to morning people, the brains of night owls scanned by scientists in Germany had less white matter, the bit of the brain that connects the grey matter together and helps nervous signals transmit. Lack of white matter has been linked to mood disorders, but it's not clear whether night owls have eroded their white matter through burning the midnight oil or if it's caused their sleep-wake cycle to focus on the evenings.

It looks likely, though, that depressive people can't shift their mood disorder by getting up earlier; there's actually a phenomenon called chronic early morning awakening which occurs in depressives, where they wake up radically early and can't get back to sleep. Being a natural early riser may provide some protection, but trying to hack your sleep schedule as a night owl may actually do more harm to your mood disorder than good.

Here's the crucial thing to take away from this article if you're still in high school: don't listen to any of this. Teens, it turns out, are naturally night owls who find getting up early difficult. It seems to be an evolutionarily developed part of human development, and it looks like teenagers definitely shouldn't try to hack themselves to be morning people, because there's a purpose behind their nocturnal wakefulness.

Teens, it turns out, produce melatonin, the sleep-inducing hormone, up to three hours later than children and adults, meaning that they don't get sleepy until far later. The American Chemical Society has reported that teens who are allowed to wake up later do better in high school and have fewer car crashes. Why the adolescent brain turns into a night owl isn't yet clear, but some scientists think it's designed to help teens live a life of their own. Being awake after adults go to sleep gave the original adolescent humans the opportunity to hunt on their own, find mates, and generally learn life skills without the interference or competition of their parents. Yes, you are meant to use those late hours talking to friends and flirting: it's science.

Once you're past the teen stage, though, there seem to be pretty solid psychological and health benefits to training yourself into early waking. So push yourself out of bed, go for a run, have a shower, and glow with the feeling of general superiority. Unfortunately, if you're a night owl through and through, it may be slightly futile trying to get your sleep cycles to shift to early-bird mode, because we're still not sure if morning people are born or made. And you have your own health benefits — but that's a whole other article.