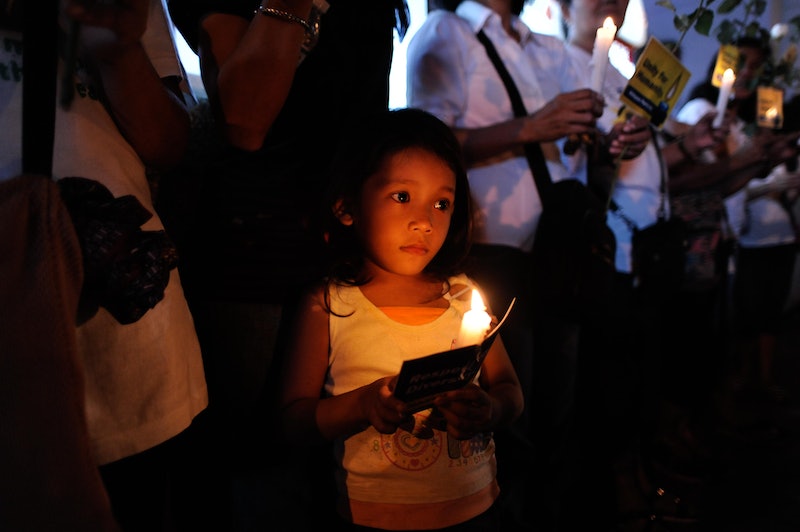 After the tragic terrorist attacks on Paris last Friday, people in France and around the world are left trying to make sense of the terrible tragedy, including young children. To try to help, children's magazine Astrapi has published a special leaflet about the Paris attacks. The leaflet can be easily downloaded and has been shared across social media, which is pretty awesome.

When terrible things happen, especially things whose root causes and potential future consequences are so complex, it can be hard to know how to talk to children about it. How do you go about putting it into terms they can understand? How do you find a balance between being honest but also not making them feel extremely unsafe? How do you explain scary things they may have already overheard from adults or from TV? It's a difficult thing for parents and teachers to navigate.

Astrapi, which is aimed at children ages 7 to 11, tries to answer some of the biggest questions both children and adults are asking: Why were so many innocent people killed? How did this happen? Who was responsible? What does this mean for us? What should we do now?

The leaflet uses informal language to directly address children, and it briefly describes the attacks on Paris perpetrated by "men of hate," and explains:

While the police conduct their investigation, we do not yet know much about these killers. What is known is that they are terrorists: people who use violence to impose their ideas. They're even willing to die for it.

The two-page leaflet also makes clear to children that even though the terrorists were Muslim, other Muslims are not in any way accountable for the terrorists' actions. "These ultraviolent people don't speak for the majority of Muslims, who practice their religion peacefully," it says.

It goes on to explain that the terrorists attacked France because it is a free country, and that the best way to respond "is to continue to live normally and defend one’s ideas while respecting others.”

Hopefully, the leaflet will help children make sense of the tragedy.

Astrapi has also in the past published a leaflet on the migrant crisis.

More like this
16 Novels That Paint A Realistic Portrait Of Abortion
By K.W. Colyard
Aesop's Queer Library Is Open
By Tomi Otekunrin
For These Abortion Clinic Volunteers, Going TikTok Viral Is A Risk Worth Taking
By Audra Heinrichs
5 Ways To Stand In Solidarity With Women In America From The UK
By Sophie McEvoy
Get Even More From Bustle — Sign Up For The Newsletter