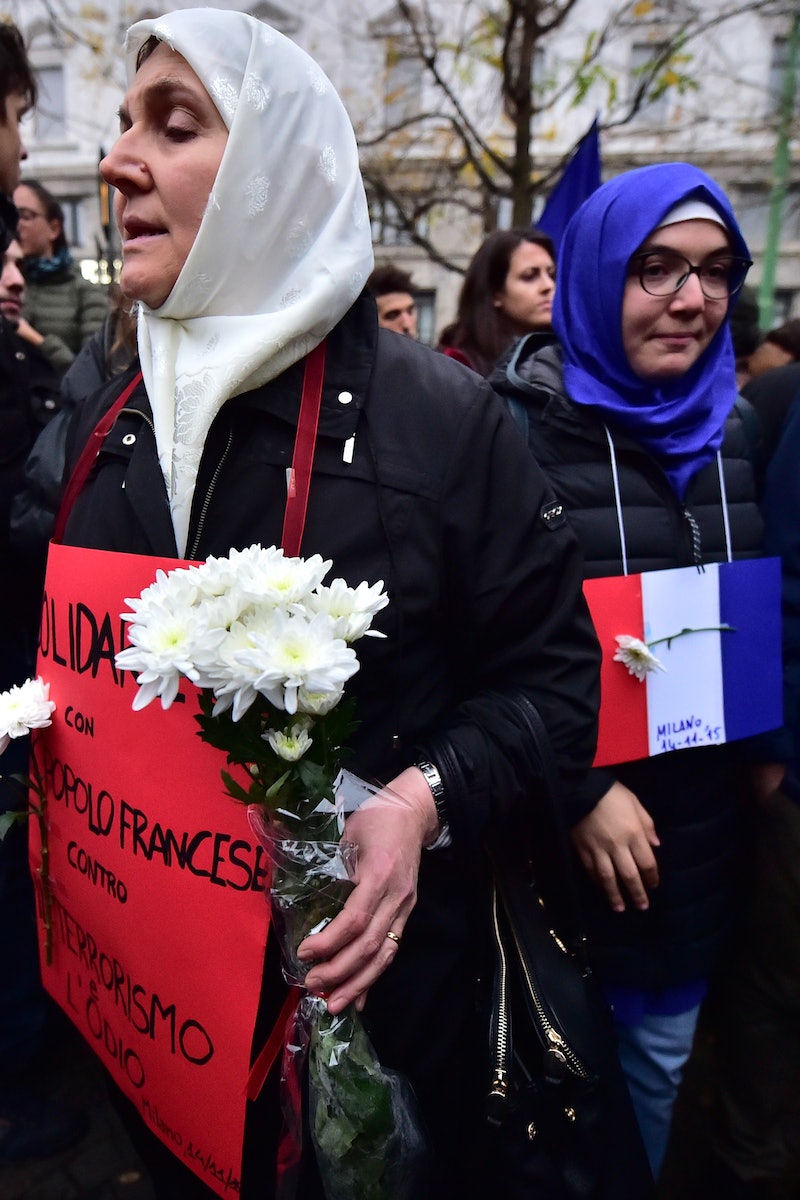 The world is still reeling in the wake of the deadly terrorist attacks in Paris, France, but sadly, there are already people saying bigoted and hateful things, calling all Muslims terrorists, and even saying the attacks are a sign that European countries should stop taking in refugees from war-torn Syria. It is possible that those responsible for the heartbreaking attacks in Paris were motivated by religion — reports indicate that ISIS has taken responsibility — but it is important to keep in mind that this is an attack committed by terrorists, not by a whole religion.

Despite the political rhetoric that suggests otherwise, not only are most terrorists not Muslim, but it is likely that of the many victims of Islamist terrorists, the majority are also Muslim. Just days before the attacks in Paris, in fact, ISIS also claimed responsibility for terrorist attacks on the city of Beirut, Lebanon that left 43 dead and over 200 wounded. Nor is it unusual for Islamist terrorists to attack a majority-Muslim city. Islamist terrorists don't just target the West — they are willing to attack anyone who disagrees with them or their extremist beliefs, including the vast majority of Muslims.

Additionally, as many have taken to Twitter to remind us, the vast majority of Muslims are not terrorists, and terrorism has no religion. Terrorists come in many varieties and are motivated by any number of political or religious beliefs. Their interpretations should not ever be allowed to define what an entire religion stands for. And in most cases, it doesn't — for instance, no one claims that the violence of the KKK or the Lord's Resistance Army or the Christian Identity Movement indicates that all Christians are racist or violent. However, when it comes to Muslim terrorists, many are all too quick to claim that the actions of a single group are enough to characterize a religion with 1.6 billion adherents.

Islam, much like Christianity or any other faith, is a complex religion, one with many interpretations and schools of thought surrounding its teachings, but the idea that it supports terrorism is not a popular one among Muslims. Even when speaking about the so called "lower jihad" (a struggle against oppression on earth as opposed the "great jihad" that refers to a person's personal spiritual journey) the Qu'ran advises restraint. For instance, Chapter 2, Verse 190 states, "Fight in the cause of Allah those who fight you, but do not transgress limits; for Allah loves not transgressors." The Qu'ran permits fighting against oppressors, but, as most Muslim scholars would tell you, targeting civilians and killing innocent bystanders is not supported by the Qu'ran, and indeed, most Muslims do not support such tactics.

Muslims, as individuals and as groups, have repeatedly denounced terrorism. In fact, it's so common that there's a Tumblr dedicated to listing examples. But the fact that Muslims and the Muslim community are still being asked to publicly denounce every instance of violence by extremists is in and of itself sad. By now it should be understood that the violent few do not speak for the peaceful many.

It is important for us to remember that "terrorist" and "Muslim" are by no means interchangeable concepts and that Islam does not condone terrorism, let alone endorse it. Implying otherwise helps to fuel bigotry against Muslims living in the West, many of whom fear for their own safety in the wake of high profile attacks, worried that news of the attacks may inspire hate crimes against Muslims in "retaliation."

Terrorism by Islamist extremists is a threat that the world needs to deal with, as is tragically evident in the recent attacks in Paris and Beirut. However, we will never be able to properly address the issue unless we recognize that the root cause is not Islam or Muslims in general but specific extremists whose values, goals, and motivations are not shared by the general Muslim population. We will never truly be able to stop terrorism — by any group — if we misunderstand the people we are dealing with and fundamentally mischaracterize the problem. And as the attacks in Paris on Friday show quite clearly, we cannot afford to do so any longer.