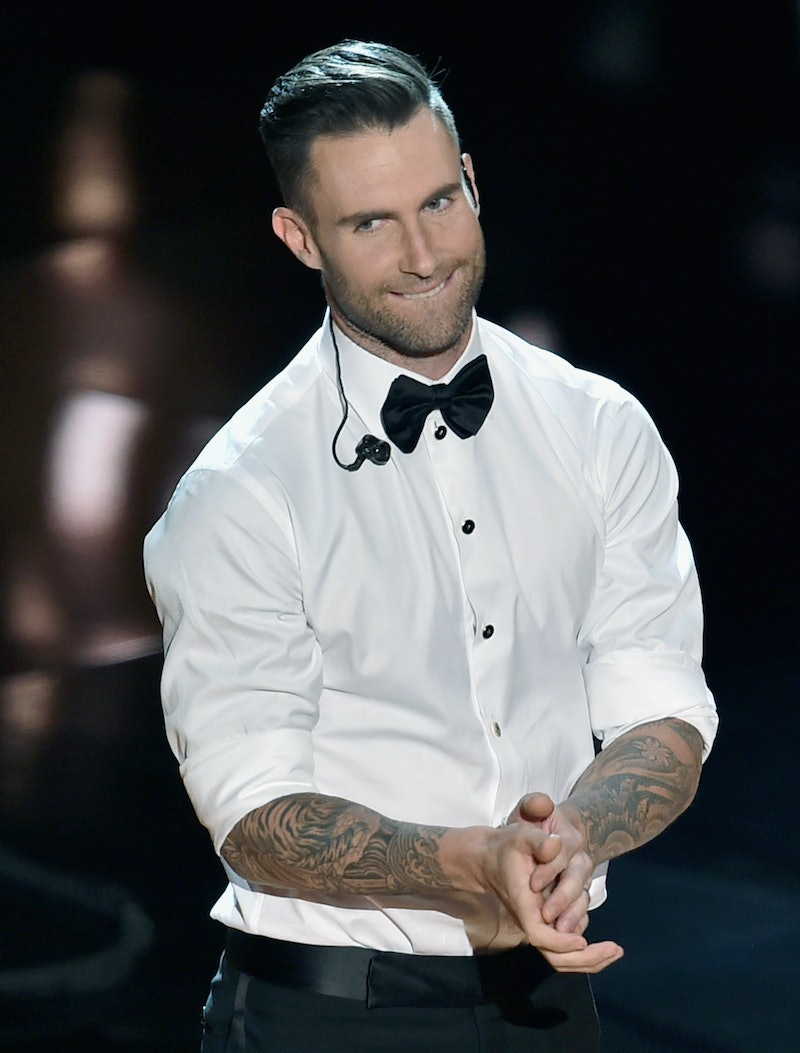 It's no secret that Maroon 5's Adam Levine loves tattoos. I mean, his arms and torso are mostly covered in ink. And now his back is even more tatted up, because Adam Levine got a new tattoo that's not only ginormous, but it also shows just how much he loves The Little Mermaid. OK, I'm not really sure about that second part (come on, he probably loves Ariel), but his new tat really is of a mermaid. And did I say it's huge, yet? It's HUGE.

The singer and judge of The Voice shared a picture of his tattoo Sunday via Instagram. As you can imagine, it has everyone talking, because it's that important. He wrote, "If you ever want a tattoo and you don't get it from @bryanrandolph... you're nuts. He's the DUDE." Even though Levine's tattoo is nothing I'd permanently place on my body, the artwork is pretty impressive. That definitely takes talent.

Actually, this isn't the first time he's shared a picture of his tattoo. In October, Levine shared two close-up images of the ink and labeled one picture as "a clue..." So now that he's posted the entire tattoo for the world to see, what do you think? Are you loving it or hating it?

All I know is I have a ton of questions regarding Levine's new ink and here's hoping he can answer them for me — or at least write a song about it.

Maybe the mermaid has meaning, or, you know, is just another way for Levine to showcase his love for The Little Mermaid. Though, it doesn't look much like Ariel.

Is that skull her boobs?

So, is she holding that skull? Or is the skull her boobs? I need to know. Now.

How long did it take?

Obviously, this wasn't completed in one sitting. Big tattoos like that take time, so I can only imagine how many times Levine had to go back until it was finished.

I have several tats, and none of them hurt. However, something that large that probably took forever had to hurt a little bit, right? Seeing as Levine has so much other ink he's probably a pro now and doesn't even feel the needle.

What made Levine want to get something that gigantic? Before the mermaid, his back was an open canvas, so I guess he just got sick of staring at all that blank space.

What do the birds mean?

If you look to the right, there are also some birds being filled in. Wait, do they represent Scuttle from The Little Mermaid?

What will he get next?

Finally, what do you think Levine will get next? Seeing as he's running out of space on his torso, he might have to choose another part of his body to tat up next time.