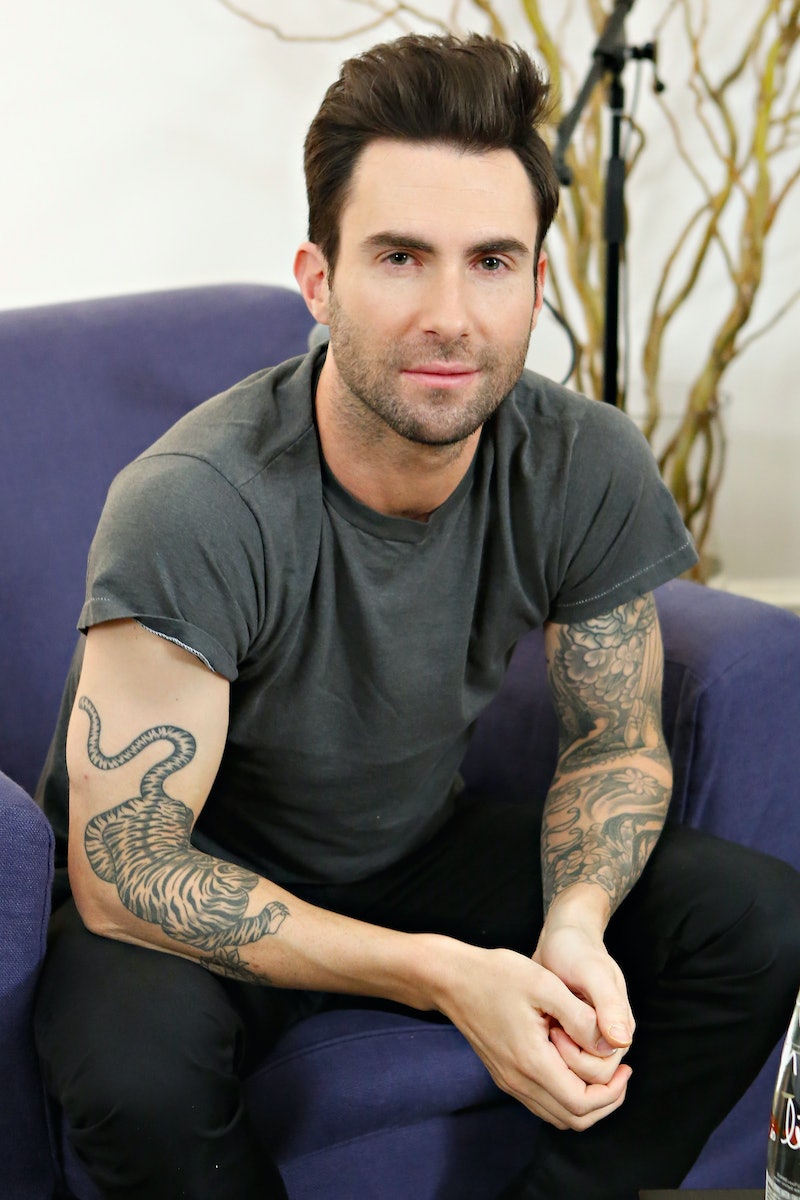 Back in 2013, Adam Levine earned the title of Sexiest Man Alive from People magazine. Another appropriate title? The most tattooed man alive. OK, just kidding. Probably not. I mean, there are people entirely covered with body ink. But my point is, Adam Levine sure has a lot of tattoos. From his shoulders to his stomach, a solid portion of his body is covered. In his People cover story, he told the magazine, "Tattoos wind up being this strange road map or narrative over the years. They always remind me of this long, weird, awesome journey life has been."

Since he has so many tattoos, it's sometimes hard to keep track. They sort of all blend together, right? Well, there's one that stands out in his mind — and not for a good reason. Apparently Adam Levine regrets his tattoo on his right shoulder because it looks like "cauliflower with a sun in the middle of it." Welp, that sounds pretty awkward. The tattoo was actually supposed to be a Russian symbol. As Levine explained in an interview with Anderson Cooper, "I have one that’s pretty stupid. I saw a guy with these really cool Russian tattoos that I can’t get because I’m not tough — like prison tattoos. They’re really beautiful interesting work, but I couldn’t get that. So I kind of got some sort of horrible bastardized version of that ... it’s just hideous."

Luckily, it seems like he enjoys the rest of his body ink. There are actually some pretty great stories behind his tattoos. Good thing they don't all look like vegetables in the solar system! Let's take a look at Adam Levine's most meaningful ink.

On his left shoulder, there's an intricate sketch of cherry blossoms and a dove. Explaining the meaning of the bird, he told People in that same interview, "This was my first tattoo. I was 21. It was five days after 9/11. I felt this need to say something with this peaceful thing on my body." (Note: You can see the cauliflower sun there on his right.)

There's a paw print on his right shoulder with the name "Frankie Girl" underneath it. This is supposedly a tribute to his golden retriever named Frankie. Aww! Reminds me of Miley, who also has a doggie tribute tat.

Going down his side ribcage, he has a giant shark. It's interesting because he reportedly has a huge fear of these animals, so it's symbolic about conquering his fears. He told NUVO magazine,

I thought the best way to get in touch with the fear was to tattoo it on my body, in a weird way, because I can’t escape it. Sometimes I’m all about embracing fears, but sometimes I’m definitely not!

What an awesome attitude about it!

The stereotypical heart with "mom" written in it is somehow less cheesy when it's on Levine. It's actually really thoughtful that he decided to honor his mom in such a permanent, precious way. However, it's worth noting his mom isn't the biggest fan of his body ink. He told Oprah, "She hates 'em, even though I've got a 'mom' tattoo."

In the previously mentioned NUVO interview, he explained that this number is a shoutout to the door number of the very first studio Maroon 5 ever recorded in. He says, "I like the symmetry of it. Also, the first studio we ever recorded at was a place called Room 222, in Hollywood." Considering how far the band has come since then, that really is memorable!

Written in Sanskrit, he has the word "tapas" above his heart, which means "fire." In an interview with Inked magazine, he explained its purpose:

The meaning is a little bit loose and can get misinterpreted, but when applied to talking about yoga, it has to do with my fire or determination for the practice. It’s a personal thing. That’s kind of why I put it in a place that’s a bit more hidden.

Very interesting! I'm guessing the rest of his tattoos are equally meaningful. At least we're one step closer in understanding them all!