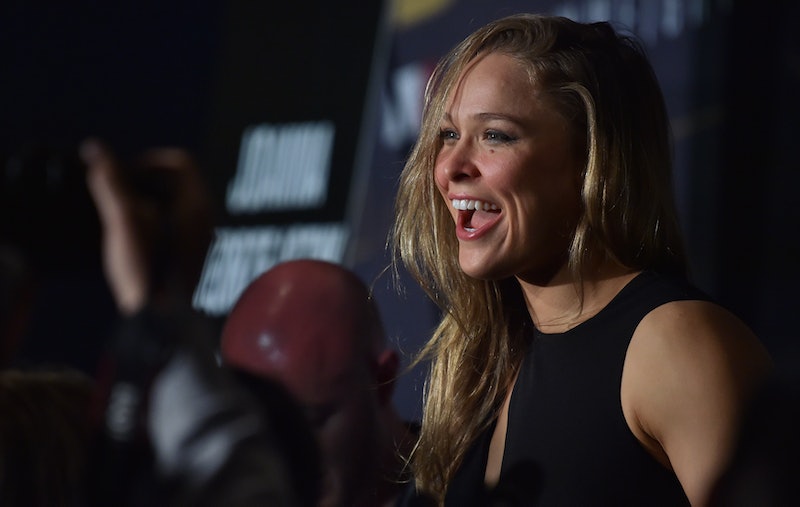 It's no surprise that Ronda Rousey's competitors were thrilled to see her lose to Holly Holm on Saturday night at UFC 193, but Donald Trump chiming in on what was described as the "greatest upset in UFC history" was less expected (though I'm beginning to expect his comments on anything and everything that happens). However, it's one thing for a presidential candidate to root for an athlete or sports team and another thing entirely to attack a person's character because they don't support said candidate's campaign. Days after Rousey told Maxim she supports Bernie Sanders, not Trump, the real estate magnate tweeted: "Glad to see that @RondaRousey lost her championship fight last night. Was soundly beaten — not a nice person!" I hate to break it to you Trump, but Rousey isn't a mean person for supporting Sanders over you.

Rousey definitely isn't the first to be attacked by Trump — it's more like the scene in Mean Girls when Ms. Norbury asks who's been personally victimized by Regina George and literally everyone raises their hand. Trump's dislike of Rousey was sudden though, as he insinuated in an August interview with CNN that Rousey liked him and said: "I'd take her on my side as a fighter."

It seems like someone was offended when Rousey told the world that she's really feeling the Bern and dissed Trump. It's not clear why Trump was under the impression that Rousey liked him, especially since she's rooting for a candidate from the opposing party. Rousey told CNN about Trump: "I just really wouldn't trust the guy with running my country, that's all ... I don't want a reality TV star to be running my country."

It's perfectly reasonable for Trump to root for Holm's victory over Rousey, but it's not acceptable for him to say she's "not a nice person" because she supports a different presidential candidate. A person's political ideologies don't necessarily determine how they treat others and thus don't dictate whether or not they're "nice," though you could argue that Trump's belief that most Mexican immigrants are criminals makes him the opposite of a nice person. If Trump thinks Rousey is a bad person for not supporting his campaign, he must have a problem with the other millions of Americans who also think he's unfit to run the country. After all, the whole point of elections is for people to choose the candidate who's beliefs most closely match their own, so no one should be publicly insulted for doing just that.

Trump referring to Rousey as a "not nice person" for disagreeing with him is an age-old sexist tactic used to tear down women who voice their opinions. Women who speak their mind, disagree with men, or display authority are often called "mean," "bossy," and "bitchy," while men who do the same are simply powerful, free-thinking individuals. Moreover, the belief that all women should be well-behaved and nice is antiquated — Rousey is a world renowned MMA fighter with much more to her character than whether or not she's nice.

Rousey, just like every other American voter, has the right to support whomever she wants without having her integrity attacked online by other presidential candidates.