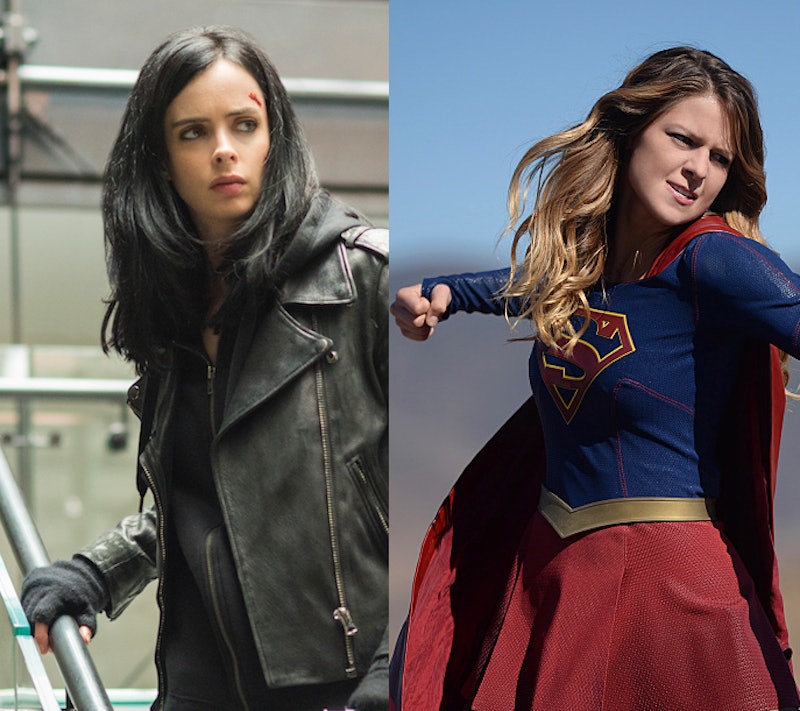 Supergirl is just getting into the swing of its Season 1 run on CBS, and later this week another show about a woman with superpowers, Marvel's Jessica Jones, is going to debut on Netflix. I'm almost worried to speak this out loud into the universe, lest I become "part of the problem," but it's going to happen no matter what. Therefore, I would like to preemptively ask that we try not to compare Supergirl and Jessica Jones in a way that would imply that there can only be one female-led superhero series on television — or that they are each other's only "worthy" competition due to their few similarities.

There is room for both shows, and it would be awesome if we treated each show as such. Granted, there are plenty of female superheroes in supporting roles on Arrow, The Flash, and Agents of S.H.I.E.L.D. that are just as important when it comes to representation and diversity, but are not likely to be put under the same amount of scrutiny. We tend to get binary in our hunt for the perfect female character, and it would break my heart if either show was deemed the "right" or "good" or "only" way to portray a female superhero.

Another reason I'm worried is that Supergirl has already drew comparisons to the Marvel Cinematic Universe in a way that was less than ideal. The Supergirl trailer, which showed Kara Danvers running around National City as a clumsy assistant, was undeniably similar to the Black Widow parody trailer that aired on Saturday Night Live. However, Supergirl is sincere and has a very different sort of feminist message, which turns out to be one of the show's greatest strengths. I also witnessed first hand how another CBS series, Elementary, was picked apart in comparison to BBC's Sherlock — particularly due to their decision to cast Lucy Liu, a woman, in the role of Watson. Not only is it possible for multiple shows about the same subject matter to exist in the same space, but the comparison is not warranted in many ways.

Both Jessica and Kara might be female, good at punching, and exist within a larger comic book mythology, but they are totally different as television shows. Supergirl and Jessica Jones are, crazy enough, geared towards different audiences and have strikingly different tones. One is a network show that airs at 8 p.m. on "America's Most Popular Network," and the other is on Netflix, rated TV-MA, and does not answer to the FCC. One is making a point that heroes can be light and girly, and the other is an exploration of post-traumatic stress disorder. It's like comparing The Wire to Brooklyn Nine-Nine because they're both about cops. Comparing these two shows reduces them to their barest elements, which is harmful for everyone.

Sure, plenty of people compare The Flash and Arrow, because they air on the same network and exist in the same universe. However, you don't see many people comparing and contrasting Agents of S.H.I.E.L.D., Heroes Reborn and Gotham or Constantine and Agent Carter against one another. Supergirl exists on CBS by itself, and the most relevant comparison for Jessica Jones is Netflix's equally gritty Daredevil.

Opinions Are Your Own & Don't You Forget It

Of course, it is absolutely OK if you prefer one show over the other. Like I said, female characters are just as diverse as female audiences. You are allowed to dislike or find fault in one or both of them; that's one of the perks of variety. Personally, I find it very interesting that Marvel's female-centric series is gritty and DC's is lighthearted, as the opposite can usually be said for their male heroes (looking at you, Iron Man and The Dark Knight). However, that doesn't mean I'm going to pick apart either character and determine that one is more valuable than the other.

Ultimately, the goal is to have more women-lead series, so that TV can offer many different, more diverse portrayals of those women on screen. The best way to further that goal is to remove language that makes it seem as if "female hero" is a singular spot that's up for competition. There is room on TV for plenty of female heroes — and villains! Pitting women against each other is already a problematic aspect of media, and this issue even goes beyond that. Focusing only on what these two shows have in common is reductive, because they are trying to achieve divergent goals in their storytelling. Celebrate, love, and/or criticize Supergirl and Jessica Jones as much as you want, just remember to treat them as the two separate TV shows that they are.