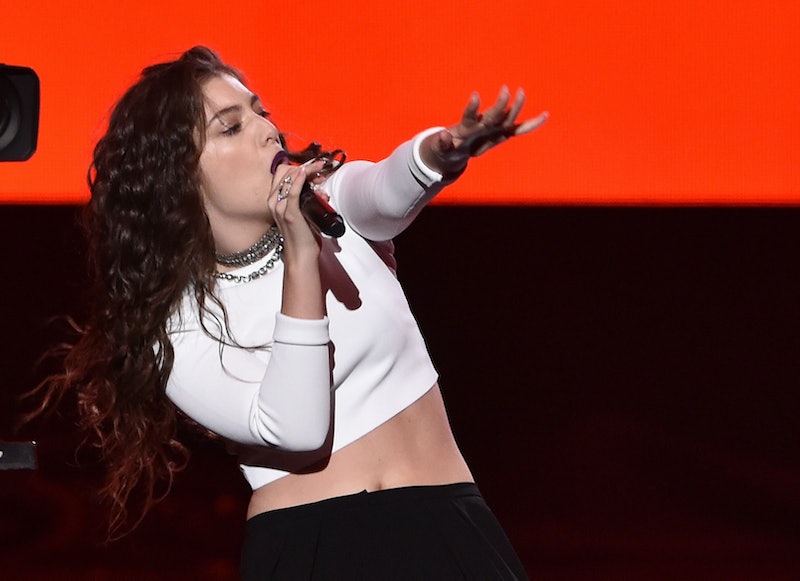 Hi there, did I hear you ask for another reason to love Lorde? Well here's one: she has the perfect response to all of her haters. Lorde was accused of lip syncing during her Nov. 14 performance on Saturday Night Live. Lorde wasn't the musical guest herself, but she joined the actual musical guest Disclosure for a performance of their song, "Magnets," on which she's featured, and apparently people were suspicious that she wasn't necessarily keeping it au naturale in the vocals department. I didn't have the same response myself, but, watching the video, I guess I can understand where people got it; her voice has a smaller, almost tinny quality to it, which, to me, signals a different microphone and reverb set up than she usually works with. But I guess it could understandably be construed as some kind of vocal manipulation!

So, people were kind of batting around that idea between themselves, wondering if she'd pulled an Ashlee Simpson up there. (Sorry girl, I know you've done a lot since, but that will forever be the association.) And, honestly, I wouldn't be that mad if she had. Sometimes, that's the best way to make sure a performance goes off without a hitch. (I'm looking at you, Beyoncé at President Obama's inauguration.) But, if there's one thing that makes me beyond sure that Lorde didn't lip sync, it's her response to this particular mini-controversy. She doesn't get defensive at all, just has the best possible attitude about it, and that's all the proof I need to convince me that this was a false alarm.

Love that, love her. It's genuinely the perfect response. Lorde didn't say there's anything wrong with lip syncing, get mad at the people wondering if she'd done it, or allow it to get her down in any way. Instead, she took it as a compliment, which is a lesson we can all take from this. If people think your performance is too good to be believed, the best revenge is a genuine "thank you." And then a re-watching of the video below to remind yourself just how much you killed it: