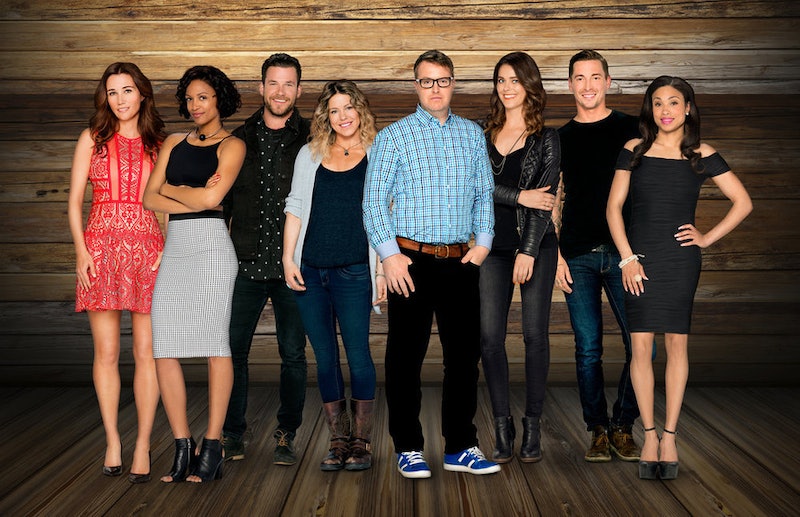 Do you know what we are missing as a society? Some deliciously guilty pleasure-esque show about hot, rich kids working at a ski resort. Oh wait! Fortunately for us, Bravo's newest reality series Après Ski fits that bill perfectly. This show has everything you need. It's basically Below Deck or Vanderpump Rules but just set at a ski resort. So, essentially, there is more faux fur and yeti boots, but the basic formula still rings true. Since it has the hallmarks of so many other Bravo reality shows, I'll give you a handy cast roundup for Après Ski to keep you abreast of who's fighting/kissing/hooking up with who.

Taking place at a luxurious ski resort in British Columbia, Après Ski caters to some of the richest people in the galaxy. This place will happily send a buff, naked man through the elements to deliver you something if you so desire. Joey Gibbons, the CEO of Gibbons Whistler (the company is called Gibbons Life) has hired not only simply beautiful people to run his new travel experience, he has hired some really impressive, experienced, beautiful people to run it. While this staff is certainly more impressive in the resume department than I originally expected, they are still a clump of lovely young people all working in confined spaces together for a ski season. If you have watched any reality show, you know this means there is copious drama and hookups. Something tells me this show will not disappoint in either category.

This guy is the big boss and CEO of the place. He is an experienced entrepreneur who has created the Gibbons Life brand. He's trying to get his resort/company off the ground and turn it into a completely unique and high end travel experience. He was also once a member of the Canadian Alpine Ski Team, so he knows his product pretty well!

Bobby looks like he knows how to have a good time. He holds the title of VIP Concierge at Gibbons Life and has a lot of experience in various entertainment services to back him up.

Charlotte is actually best friends with Bobby and came to Gibbons Life as a package with her BFF. She is an assistant at the company and was at one time an interior designer.

Elise is actually a classically trained chef and successful fitness model/trainer/enthusiast. According to her Bravo bio, she gained her culinary skill set at the Pennsylvania Culinary Institute and has had numerous roles in restaurants everywhere. She comes to Gibbons Life as the operations manager and, from the sound of it, she is pretty qualified for the gig!

Lynsey is seriously an impressive human being. She is a professional skier from Wyoming who has won so many awards for her extreme skiing, it will make your head spin. She was named Skier of the Year by Powder Magazine and Freeskier Magazine and even produced a film featuring women in extreme skiing to give more exposure to women in extreme sports. When she is not being a complete extreme winter sports badass, she is a published photographer and artist as well. According to her Bravo bio, she is part of the Gibbons Life teams because she wants to continue to spread and teach her love of skiing.

Jim never stops moving. He is an extreme sports enthusiast and avid adventurer who has launched and sold his own business and is in the process of creating another start up. His Bravo bio says this guy scuba dives and jumps out of planes for fun and even has his pilot license. He is pretty much an action hero.

Kendra is a VIP Concierge along with Bobby and comes from a background that is just as impressive as her co workers. Holding a couple of degrees (one is in Mandarin) from NYU, Kendra has produced runway shows for New York Fashion Week, according to her show bio.

Catch up with this talented cast Mondays on Bravo.