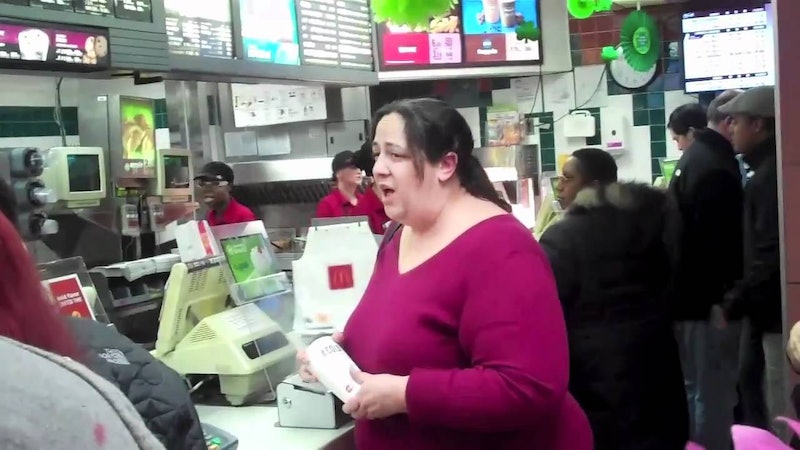 Kelley Lynn walked into her Adelphi University classroom where she teaches comedy and theater as an adjunct professor to find that her students were glued to their phone screens. They weren't looking up the latest Kardashian gossip, or refreshing their Twitter feeds, or texting from across the room. Instead they were looking at a six second Vine video that had attained 15 million views, featuring their professor Kelly Lynn falling on the ground of a McDonald's and saying "Oh no, I've McFallen!" — a video Lynn didn't post on Vine or give permission to someone else to post on her behalf.

To better understand this story, we have to go back five years to 2010: the year B. O. B.'s Airplanes featuring Hayley Williams ruled the Billboard charts and I still didn't know how sex worked. At the time, Lynn started working with Opie (Gregg Hughes), the former half of Opie and Anthony radio show on XM/Sirius radio where they comment on American sociopolitical and popular culture. Together, they created comedic web content for Opieradio's YouTube Channel. In the videos Lynn would act out a premise brainstormed a head of time, commit 100 percent to the bit, and do this all in a public setting. I would describe this as part Improv Everywhere and part Jackass Presents: Bad Grandpa.

One of the videos they made was titled Oh, I've McFallen (original video) - @Opieradio . The premise was simple. In 2010 McDonald's had come out with the McLobster for a limited time, which Opie and Lynn thought "sounded disgusting and hilarious". Lynn and Opie quickly came up with the idea to have Lynn try to order one, and upon finding out it wasn't possible at that particular McDonald's, she got very visibly frustrated. In order to have an ending to the video Lynn suggested, "How about if I just fall down, and then say 'Oh no, I've McFallen!'?". Clearly she was onto something, because the video got 50,000 views. Here it is for reference.

Lynn had always wanted to be a performer. When she was younger, Lynn and her cousins would buy record albums like The Wizard of Oz and The Sound of Music, then make costumes and props out of cardboard and tin foil and sheets. They would later charge their families to watch the plays in their very own basement. Ever since then Lynn "loved the applause and loved the rush of performing". And like any performer, Lynn expected to have her work be credited back to her.

That was definitely not the case when she walked into her classroom in 2015.

While the Vine video Lynn's students showed her featured her face, her voice and her work, not a single word was written to give her credit. As far as the Internet was concerned, this was just a random event captured by someone's phone. Obviously this happened for two reasons: First, Lynn's performance was so natural and convincing, no one thought this was anything but an actual woman having a meltdown in a McDonald's; secondly, and most importantly, the creator of the Vine video didn't care enough to ask for permission to use her video.

We live in an age of plenty when it comes to digital Internet content, and it's not looking like it will let up any time soon. And while we are constantly enjoying meme after meme, video after video, Vine after Vine, we aren't really thinking about the person behind the content. Who cares who the Ermahgerddon Girl is? Who cares what happens after that kid who bit his brother's finger grows up? You laughed for a while right, so why does anything else matter?

Here's exactly why it matters, particularly in Lynn's case: Content ownership is extremely important. And it's a very tricky thing to talk about when it comes to the Internet. When you post something online these days, you are basically saying, Here you go, this is now everyone's property to use how they see fit! You might not intend for that to be the case, but the Internet is like the Wild, Wild West. Anything goes. Even if the rules exist in some form, who will be policing them when statistics show that every minute of every day 1,400 new posts are being written and 72 hours of YouTube video are being uploaded? (I'm pretty grateful you decided to click on this post and not the other 1,399.)

I understand that it's hard to take something like this seriously when we're all here for kicks and giggles. I know it because I'm the one passionately talking about ownership of videos where a chimp continuously poops and a cat plays the piano. I'm right there with you, guys. But there comes a point where not giving someone credit means abusing their intellectual property and making money off of someone else's work. And yes, this video is intellectual property.

I'm a comedian/content creator myself, which is why Kelley Lynn's story hits me so hard. She is a working actor and a comedian. When she saw that the Vine featuring her work got 15 million views she didn't get angry or upset (like I would have). She didn't find a lawyer to sue the person who posted it (like I would have). Lynn simply messaged the guy and asked him to add a link to her original video and credit her work. Simple, right? But that never happened. The person messaged her back and explained that it was impossible to change the caption on Vine so he deleted the whole thing instead. But the real rub? Hundreds of parodies already crept up, and other people were posting this video on their personal channels. And yes, you guessed it — this was all done without crediting Lynn.

We have seen this before. A few weeks back the Internet blew up when it was reported that comedian The Fat Jewish was stealing other people's jokes and making money off of it on his Instagram account. Many professional comedians like Matt Besser, the founding member of Upright Citizen's Brigade, spoke out in a Rolling Stone article, saying, "It only became harmful as soon as his behavior was rewarded." Besser argues that content ownership only becomes an issue when the creator is cheated out of a profit they rightfully deserve. In Lynn's case, exposure was something she deserved. Instead, hundreds of kids are posting tweets not knowing who she is or what her work is. Her catch phrase has been turned into a hugely popular hashtag on Twitter.

It might not seem like it to an average internet consumer, but the "McFallen" video took a lot of work. And Lynn knows what hard work is. She has been auditioning for roles and taking comedy classes for years. Chipping away day after day, she is relentless when it comes to her dream of acting. Most notably, she has been using comedy to heal ever since her husband passed away from a sudden heart-attack. Lynn has seen the immediate impact of her standup whenever she performs at The Camp Widow event run by Soaring Spirits International, a nonprofit started by a widow in Simi Valley, California. After one of her sets in room with 300+ widows, people kept coming up to her and saying that her show was the first time they've laughed since their partners passed.

It might not seem like there is a connection here, but this is exactly why content ownership is so important. The performance that Lynn does for other widows is the type of job that she can get more of with added exposure. The gist of it is this: the more eyes Lynn gets on her material, the higher the chance that she can help others. This won't happen if her videos and her content are being used by others without her knowledge or permission.

The Internet is great because it levels the field for little guys like me and Lynn, who don't have a huge team behind them, hustling to getting their client's content seen nationally. There is even a way that content creators can make money off of videos like this:

YouTube pays out creators through ads: the more popular your video or channel the more each click pays you out. (Be aware that this is an overly-simplified version of how things work.) Vine is a little different. There are companies, like Collab, that protect the rights to popular videos and even partner with Viners to make more content together. They keep your stuff from being used without your permission, and also pay you money directly. Unfortunately, if you are not signed with these companies, you are in danger of having your videos be up for grabs.

What I love about working for the Internet is the freedom to make whatever you want. But, any reputable site will ask you to make original content. For instance, when pictures are used in my articles, you can be sure that I asked the owners of that picture for permission. That goes for other things like embedded tweets and Instagram posts. It's little steps like this that help creators get their dues while at the same time retaining the weirdness of the Internet.

While being freshly Vine-famous is all new to Lynn, she is taking it all in stride. 15 million plus views doesn't mean you are set for life. Quite the opposite. Lynn has been reaching out to people re-posting her video, asking them to credit her. Many have. But too many didn't.

Instead of focusing on the negatives, Lynn has been auditioning more and writing a book. Her next film project will be a web series called 2 Kawaii 4 Comfort, about four hardcore anime fans who are forced to confront their own mortality at the worst convention ever. She is also focused on her book My Husband Is Not a Rainbow: The Brutally Awful, Hilarious Truth About Life, Love, Grief, and Loss, which has a tentative release of summer 2016.

Seeing how hard Lynn works makes me realize that we need to try harder when it comes to content online. We should be more thoughtful about asking permission to use people's work, and making sure people get credit where credit is due. When we don't do our part, we screw over hard working people like Lynn and deny her the exposure she needs to succeed in her profession.

For every Makers Studio member that has a machine running smoothly behind them, making sure their content is safe, there is a person like Lynn who deserves to see her name under a video featuring her — and reap all of the rewards that come with it.

If you want to give Kelley Lynn the proper credit she deserves you can find her on Twitter as @kelleyiskelley or her website.