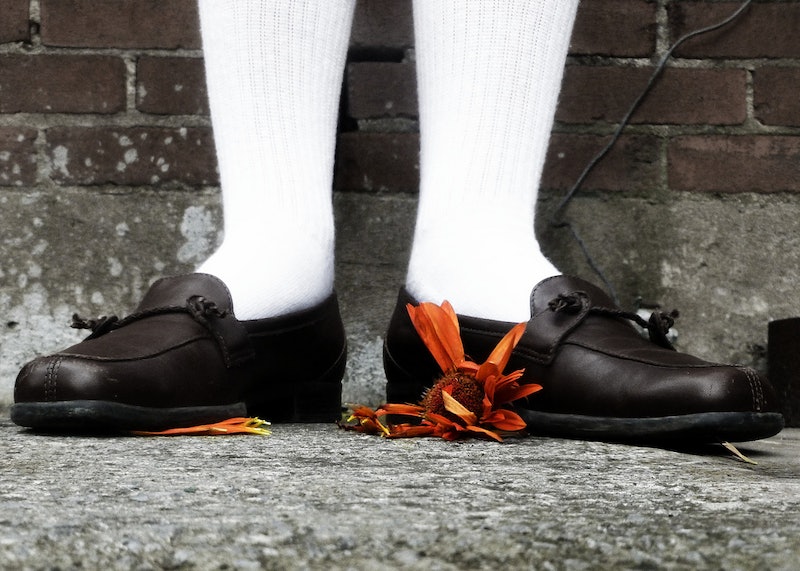 Whether you're suffering from a bad breakup or the heartbreak that comes from learning your childhood crush is a married, shlubby, father of two, the post-romance storm of emotions is one best not weathered alone. The world is too much when you're in the throes of bad-romance pain — just getting out of bed (and then, seriously, getting dressed, brushing your hair, making coffee...) seems to require a guidebook. We all know that, whether you turn to a pint (of beer or ice cream), the gym, or your best friend, mending a broken heart requires nourishment, stress relief, and sound advice.

A sense of humor helps, too. (Why do you think those Ben & Jerry's flavors make so much sense?)

I have to admit, though, it can be kinda hard to share one's emotional woes. I don't know about you, but I get self-conscious about turning to the same people for advice. Fortunately, in her new book, It Ended Badly: 13 of the Worst Breakups in History , sex and dating writer Jennifer Wright provides a shoulder to cry on — and introduces you to some folks whose situations will help you get through. In each of the stories Wright recounts, you'll walk away with some practical advice, and some historical trivia that's so bizarre you'll LOL.

Wright reassures us that "people go on. They lead good lives. They do great things." And she looks to the past to support her claim. Instead of forcing you to see how the life of a sadistic Roman emperor relates to yours, Wright decodes the universal messages hidden in your history book to offer to you these 13 lessons that will soothe your broken heart.

Toxic relationships happen — like the one between Emperor Nero and his castrated-slave-cum-bride Sporus — but there's also no reason to stay in a bad obsessive loop. While this might be easier said than done, it's important to remember that, once a relationship is over, you're not obligated to keep reliving what could have or might have been. You're free to move on.

Meet Eleanor of Aquitaine, she of bare-breasted, riding into the Second Crusades fame. Though "she wasn't able to inspire devotion in [Henry II], Eleanor was loved, and downright worshipped, by a lot of men. Troubadours ... used to brag about [her brilliance]." Never assume that your relationship didn't work out because you were too powerful. Own your mightiness.

"We have all written or texted or emailed our former lovers something we regret," Wright writes. You might say something that later embarrasses you — or do something rash, like Lord Byron's mistress Caroline Lamb and the whole pubic hair thing.

4. But Some Exes Can Go The Distance

The friend distance. Eleanor of Aquitaine's first husband, King Louis, was there for her (with an entire army) when she and her sons needed to lead a rebellion. As Wright writes:

For all the talk of bad exes ... it's really one of the nicest things in the world when you can go to someone you were once in a relationship with for reassurance or emotional support or to wage war against your philandering new husband.

Score! If your ex has turned into your rock, be thankful.

5. People In The Past Had It Just As Bad, Maybe Worse

When you're feeling down about your ex, just remember that you're not doing as poorly as Russian empress Anna Ivanovna, who locked a couple in an ice palace because she was so heartbroken she didn't want to have to face anyone else in love. It's so much easier to just mute all the engagement photos on Facebook.

7. But You Can Be Classy About It

Like Anne Boleyn, who only had kind words for her ex, Henry VIII, even though he condemned her to death as a witch. Right before she was executed, her last words were, "'I pray God save the king and send him long to reign over you, for a gentler nor a more merciful prince was there never; and to me he was ever a good, a gentle and sovereign lord.'" Mmkay.

More like this
The “Beatrice Six” Were Awarded $28 Million After Their Wrongful Convictions
By Brad Witter
It Took Investigators 23 Years To Correctly Identify Helen Wilson's Real Killer
By Brad Witter
16 Novels That Paint A Realistic Portrait Of Abortion
By K.W. Colyard
At 14, Jenny Han Wrote Rom-Coms About Her Friends & Fan Mail To Leo DiCaprio
By Alyssa Lapid
Get Even More From Bustle — Sign Up For The Newsletter