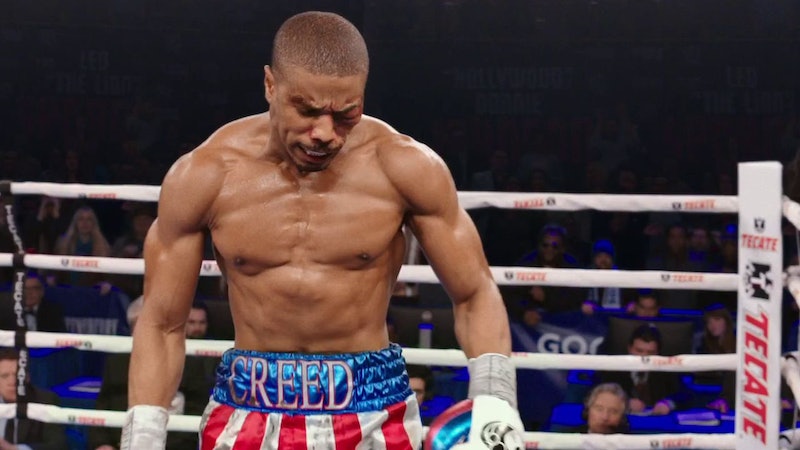 In the new boxing movie Creed , Sylvester Stallone once again plays his most legendary role: That of boxer Rocky Balboa. Except this time around, it's not Rocky who's stepping into the ring. That honor falls to actor Michael B. Jordan, who's portraying Adonis Creed, the son of Rocky's one-time rival and friend, Apollo Creed. Jordan got into absolutely insane shape to play the role, and he 100 percent looks like a real boxer. And while Creed 's trailers have largely focused on Rocky training Creed for his venture into boxing, not much is revealed about who the young fighter will be taking on in the ring. While Rocky's most famous on-screen opponents have been portrayed by actors like Carl Weathers, Mr. T, and Dolph Lundgren, his most recent rivals have actually been real life boxers Tommy Morrison in Rocky V and Antonio Tarver in Rocky Balboa. So, will Jordan be tested in the ring in the same way? Are the Creed boxers real?

Creed does feature several real boxers, in fact. One of the fighters in the film, Gabriel Rosado, even declared that Jordan became a competent boxer thanks to all the training he put in for the movie. That's great news for fans because one thing that made the Rocky movies so great was that Stallone always came across like he was a real boxer. I'm glad to hear that Jordan is able to accomplish the transition to believable fighter on screen, so here's a look at the five actual boxers that will be joining him in the movie.

Bellew has the biggest role of any boxer in the film, as he'll be playing Jordan's climactic opponent and current title holder, "Pretty" Ricky Conlan. In real life, Bellew is a British fighter who was once the WBC International Light Heavyweight Champion. He's set to fight for the EBU Cruiserweight Title next month.

Ward's role in the film hasn't been revealed, but he shouldn't be overlooked since he's the most accomplished fighter in the film. He won an Olympic gold medal as an amateur, holds numerous world titles, and has a professional record of 28-0. He's even been ranked as the world's second best fighter pound-for-pound after Floyd Mayweather Jr. by Yahoo Sports. In other words, Creed had better be careful around him.

Another experienced fighter with a mystery role in the film, Rosado doesn't appear in the credits for the movie on IMDb, but he does appear in the film's trailer. Rosado hails from Rocky's hometown of Philadelphia, and is a former WBO Inter-Continental Super Welterweight champion (boxing has a lot of titles).

IMDb credits Bazille as Amir in the film; his only acting credit. He has a little more experience as a boxer, but not much. BoxRec lists his record as 2-3 and his weight class as super welterweight.

Another Philly-based fighter, Crawley has a record of 4-0 as a lightweight. He's also the son of Tyrone "Butterfly" Crawley, a legendary fighter from the area who went 22-2 in his career.

Creed obviously has some great boxing pedigree behind it, and will surely live up to, or even exceed, the status of the other Rocky films in the boxing community.