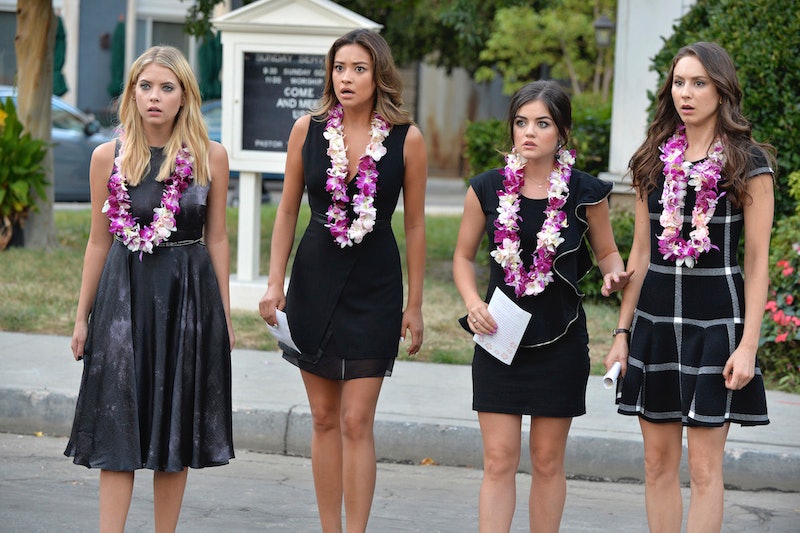 Unlike the fifth season, which creepily ended with the Liars trapped inside of A's demented dollhouse, Season 6A of Pretty Little Liars ended on a happier note, with the girls excited about the future and their new A-free lives. Unfortunately, as the brief flash-forward at the end of the episode suggested, all will not remain well for the Liars: according to showrunner I. Marlene King's interview with MTV News, there's a new A in town who is deadlier than ever, and has a very big reason for entering the girls' lives. According to King, "this Big Bad has an agenda, and it’s to find out why [someone] passes away — and to seek revenge on the person responsible... [The Big Bad] will kill people to get that answer." We may be looking at more than one dead character when the show returns — and who will die on Pretty Little Liars may be the first mystery of Season 6B.

While it doesn't seem very likely that A is seeking revenge for the death of a character that we already know (though I suppose it's always a possibility, given the many twists and turns of PLL) this new Big Bad could very well kill a beloved Pretty Little Liars character in order to get back at the girls, or possibly frame them for the murder. So who might die at the hands of the new villain when the series returns? Here are a few ideas:

The Season 6B promo shows that Cece is on the verge of getting out of the mental facility she has been confined to for the past five years. If someone wants to get back at the Liars, killing Cece would be a bold, but logical move: the girls technically do have a motive for wanting Cece dead and A could easily frame them for her murder. It wouldn't be the first time someone tried to get the girls blamed for a former A's murder — Cece pulled the very same trick with Mona's "death." There's some disturbing poetry in the new villain attempting to do the very same thing.

Mona may have been the Original A, but she slowly grew to become the girls' ally — they did everything that they could to try and find out who killed her, even turning on Ali when it seemed like she was the guilty party. Could Mona be the new villain's next target as a way to punish the girls, and perhaps put them back in the horrible head space they were in when they went to Cece's dollhouse?

We still have no idea exactly how Sara got involved with Cece, and if she was the victim of Cece's kidnapping or a willing participant in her crimes. Either way, this girl totally betrayed Emily (enough for Em to punch her square in the face) and is definitely an enemy of the liars, perhaps even more than Cece. If the new villain wants to take down the girls, offing Sara (whom we do see briefly in the Season 6B promo) would be one way to get the police to turn their attention to the girls.

Maybe the death that the new PLL villain wants answers about is actually Bethany. Melissa booked it to London after admitting that she was the one responsible for Bethany being buried alive, but what if the new A finally figured that out and is now out for revenge? This new Big Bad could have killed Melissa after learning she was the one who put Bethany in that hole, and is now seeking out who may have hit her with that shovel. If Melissa does get killed in the new season, Mona may also be on A's hit list.

Pretty Little Liars promises more funerals ahead this season, and every character should watch their backs. This A means business.