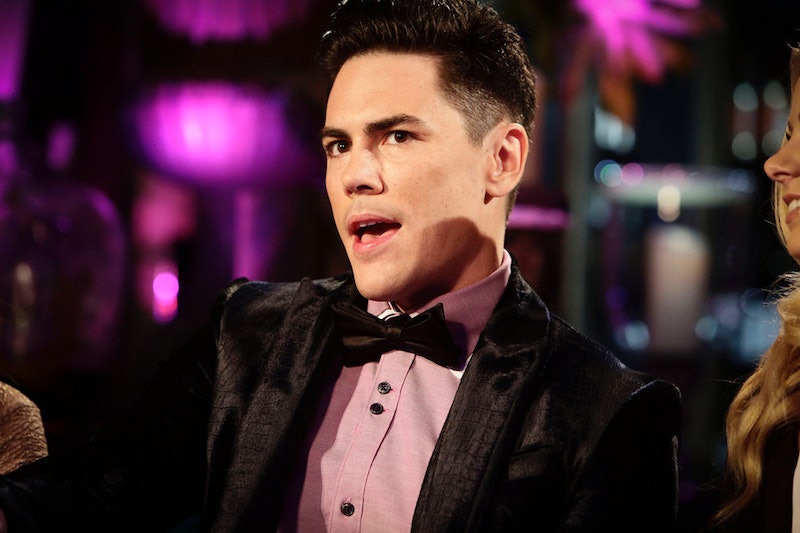 It's the fourth season of Bravo's Vanderpump Rules, and according to one SURver, it's "revamped and reborn." Tom Sandoval, an original Vanderpump Rules cast member, spoke to Bustle about the current season and his band, Charles McMansion, teasing what fans can expect from this season. "You might see some people that sacrifice things they stand for and their morals a little bit, in order to go day drinking and get their ass kissed," Tom says.

Although "sacrificing what you stand for" doesn't exactly scream "revamped and reborn" for Vanderpump Rules, it's certainly very welcomed by fans. Season after season, the show proves that while The Boss — Lisa Vanderpump — is getting embroiled in her own drama on Real Housewives of Beverly Hills, the staff of her restaurants never come up short in supplying their own SUR brand of drama.

Most of the time, it seems like Lisa might not want to get involved with all of the drama her staff brings — quite literally — to the table. But deep down, the entrepreneur always knows what's going on in her restaurant. "My favorite thing is when Lisa will say, 'So what's going on with you and blah blah blah,'" Tom says, "And I'll be like, 'Well the other day—' and she'll be, 'Ugh, I don't have time for this.'" Because, even though Lisa might fake interest in the drama taking place under her restaurant's roof, somehow, she always finds out what the 411 is on every employees' personal life.

And even though Lisa hands out tough love to her staff when social lives comes to work, Tom says that it's actually nice to have someone who knows their personal details. "I think she sometimes sympathizes with us when we got through things," he says. "We obviously respect them, and they respect us. Until we give them a reason not to respect us, then [Ken and Lisa] usually put us in place."

Tom promises that Season 4 of Vanderpump Rules will be filled with everything fans love: shade. "[Ariana and I] get a lot of shade thrown at us this season, just for living," he says. As for someone Tom doesn't mind throwing shade at, Stassi is returning to the fourth season of Vanderpump Rules. Cast members like Scheana and Katie have made their feelings about the Queen Bee’s return known, and Tom only echoed their comments. "All this judgement and shade has been thrown our way," he says.

"To come back the way she comes back … which just happens to be when the cameras are rolling..." Tom says. "To me, that says a lot about a person who literally contradicts everything they've ever stood for."

Another relationship to look out for this season is Jax and Tom. The two have gone through a lot over the past four years, like when Jax and Kristen (Tom's ex now, but current girlfriend at the time) slept together. "I take vacations from Jax," Tom says, "I just don't tell him."

We'll have to wait and see how this season develops for Tom the rest of the staff at SUR, but until then, let's start theorizing who sacrifices their morals, shall we?