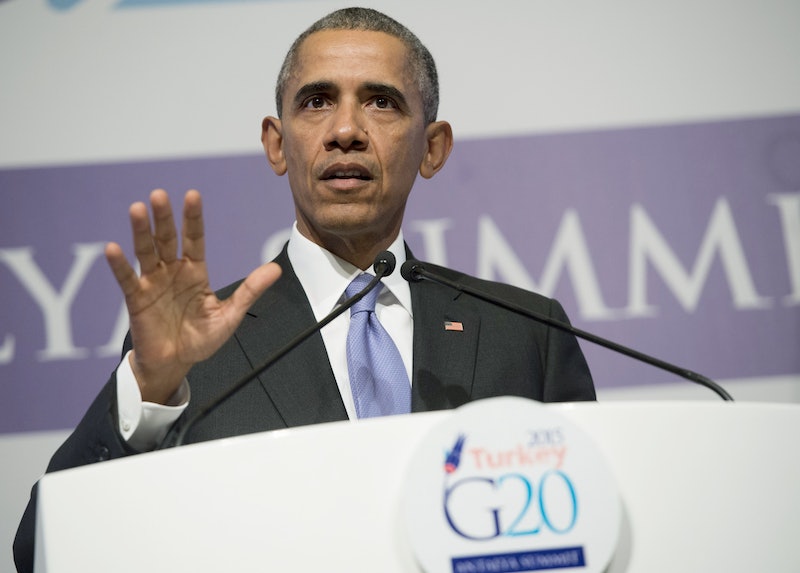 Ever since ISIS' rapid, unforeseen rise to power in Iraq and Syria last year, President Obama has been under intense pressure to respond with military force. While he's launched airstrikes and sent small contingents of military advisers and special operations forces to both countries, he hasn't done what war hawks have been demanding from day one: order a full-fledged ground invasion. Some are hoping, however, that the Paris terrorist attacks have changed the equation. So, will Obama send American troops to fight ISIS in light of the violence in France?

Don't bet on it. When asked Monday about the possibility of changing course in Iraq and Syria, Obama shot the idea down pat and mounted a vigorous defense of his administration's ongoing strategy. In the president's view, ISIS (or ISIL, as he refers to it) can only be defeated in the long run by local populations, not foreign armies.

"It is not just my view but the view of my closest military and civilian advisers that [a ground invasion] would be a mistake," Obama said at the G20 Summit in Turkey. "Not because our military could not march into Mosul or Raqqa or Ramadi and temporarily clear out ISIL, but because we would see a repetition of what we've seen before, which is if you do not have local populations that are committing to inclusive governance and who are pushing back against ideological extremes, that they resurface, unless we're prepared to have a permanent occupation of these countries."

While some could chalk this up to stubbornness — Obama doesn't want to deviate from the approach he's been championing for over a year — there's evidence that the president truly does believe in this mindset. He's articulated this point of view before: In September, he argued that America "cannot, over the long term or even the medium term, deal with [terrorist groups] by having the United States serially occupy various countries all around the Middle East."

"We don't have the resources," he explained. "It puts enormous strains on our military. And at some point, we leave. And then things blow up again."

Cynical? Sure. But Obama isn't wrong; his cynicism is solidly grounded in history. The U.S. invasion of Iraq is the obvious example — America's decade-long occupation only resulted in a more dangerous terrorist force, ISIS, rising to power — but it's not the only one. There's also the ongoing war in Afghanistan, which has failed in its stated goal of flushing out the Taliban. Going back a bit further, we have the Soviet Union's 10-year campaign in Afghanistan, which succeeded only in expediting the collapse of the USSR and empowering the forces that eventually became al Qaeda. You could even include Israel's 15-year occupation of southern Lebanon, which didn't succeed in eliminating Palestinian groups devoted to the destruction of Israel.

Obama understands that military occupations, especially in the Middle East, usually don't work and are often highly counterproductive. There's no reason to believe that a U.S. invasion of Iraq or Syria in the name of defeating ISIS would be any different.

More broadly, Obama's thinking reflects an acknowledgement of the limits of America's ability to direct events in the Middle East. Between 2002 and 2013, the United States intervened in Iraq with ground troops, then intervened in Libya without any ground troops, then didn't intervene in Syria at all. In all three cases, the result was the same: utter catastrophe, the collapse of the central government, and a severe increase in senseless violence.

The notion that the American military simply doesn't have the power to single-handedly shape the Middle East in its image has distressed many conservatives, who argue that such an attitude is tantamount to weakness or surrender. Obama made clear on Monday that he doesn't buy this argument, and in fact, that he's getting fed up with it.

"What I'm not interested in doing is posing or pursuing some notion of American leadership, or America winning, or whatever other slogans they come up with, that has no relationship to what is actually going to work to protect the American people and to protect the people in the region who are getting killed and to protect our allies and people like France," Obama said. "I'm too busy for that."

There are viable options for dealing with ISIS, but in the eyes of Obama, a ground invasion isn't one of them. That calculation is based in history and pragmatism, and the Paris attacks — horrific and tragic as they were — haven't changed it one bit.