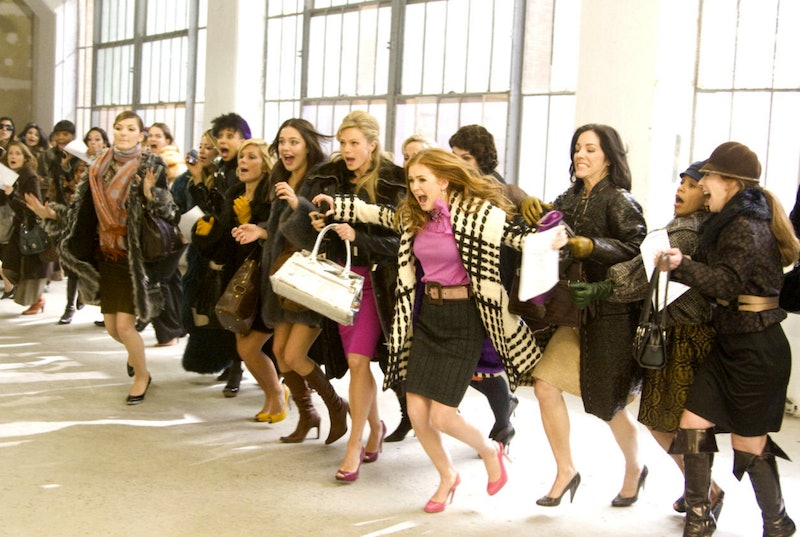 Every year, it is with certainty that — in addition to tryptophan-induced comas and general hungover lethargy — the day after Thanksgiving will bring deals, door busters, and drama. If you've mustered up the willpower to overcome your post-Turkey Day listlessness, what is also certain for you is this lineup of the types of people you'll run into on Black Friday.

For the fresh-faced newbies and battle-scarred alike, no amount of preparation can equip you for what's in store — literally — on the big day. Even if you're a Black Friday veteran who's survived the mayhem year after year, somehow during the 364 day hiatus we have from our day in retail hell, we forget the details of the storewide suffering, the aisles of anxiety, and the cash wrap chaos. Seasoned shoppers advise pointers like mapping out the sales floor during a pre-Thanksgiving recon visit, creating a specific list and checking it twice, and adding backups and alternatives to make sure you leave with something after the ultimate sacrifice.

Once your game plan is drawn out, knowing who to expect on the battlefield gives you a leg up on the competition. Fellow shoppers become opponents and obstacles — don't be caught by surprise. If you know who to look for, who to avoid, and what to expect from every type of person who will cross your path in the panic, you'll move that much more swiftly and efficiently through the crowd. So before you venture into the lawless disorder that is Black Friday, study up on these profiles to see who you'll be up against, and ready yourself for every personality type you might encounter at the front line.

1. The Black Friday professionals aka The Moms

Of the long list of Black Friday run-ins, here's a force to be reckoned with. These ladies hold high-waisted black belts in budget shopping. Part time coupon clippers, their frugality is unmatched. They've done their homework, and know the ins and outs of securing the ultimate holiday gift haul for half the price. They may seem sweet and nurturing any other day of the year, but come Black Friday, a whole different side of them comes out. You don't want to be standing in their warpath.

2. The ones who camped out the night before

These zealous shoppers sacrificed a good night's sleep for the first place in line. They'll be shuffling along with stiff backs and the faint scent of unwashed human. They know they got to the store before everyone else, so they will feel entitled to the best goods. Even if you beat them to the most sought-after merch, they'll be a tough crowd to mess with since sleeping outdoors for the night revved up their survival instincts.

3. The ones who got no sleep the night before

This descriptor is applicable to many a Black Friday shopper. You'll know them when you see them. They'll be the ones with dark circles under their eyes and a curling upper lip. It's against nature to spend the evening loading up on tryptophan and starch, forgoing sleep, then putting yourself in an environment of fluorescent lights, linoleum floors, and dead center in a stampede of shoppers. But there's no time for a pity party here. You had a full REM cycle during your three hour nap, and are ready for whatever the day brings. The best you can do is avoid them. They're slower moving, and will only cut you down with grouchy affronts.

The other set of sleep-deprived shoppers went with the route of self-medicating extreme. After a few too many double shots, they'll be twitching, wide-eyed, and ready to attack those Black Friday sales with a hyper veracity that will leave less aggressive bystanders in their wake.

Beware of the shoppers who use their bodies to barricade pathways, push away human obstructions, and violently secure their merch. This dangerous set unabashedly resorts to extreme force to get what they want, and their unchecked aggression is what typically leads to a mob and many bruises.

These are the individuals publicly calling out line cutters and reminding sales staff the fine print rules of the various door busters. They are best ignored. All they will incite are irritated salespeople and a swing from type number five.

While they won't be directly competing with you by grabbing the key items off your gift list, they will be getting in your way with their insufferable IDGAF attitudes and tuned-out trudging, ridden with teenaged angst. They'll be a walking hazard following in tow of their clueless parents, faces glued to their iPhone screens Snapchatting just how next-level bored they are.

Shopping is their "one" vice, and they won't let anyone else's agenda stand in their way. They started their crack of dawn morning with Motrin and mimosas, and are headstrong on checking off every item on their Treat Yo Self gift lists. Black Friday is their "me time," and their cut-throat approach and talon-like press-ons will make sure of it.

This is the set that uses shopping as therapy. They can be just as aggressive as the former personality type, but when push comes to shove they're less likely to beat you with their purse, and more apt to burst into tears.

These poor souls didn't know what they were signing up for when their family member recruited them to be retail wingman for the morning. Sure, shopping is fun, right? But Black Friday is a whole other animal. These guys will have very little effect on your shopping game. You may not even notice them, as they'll likely be lost in the trenches.

11. The ones who turned the day into a family affair

Nothing says "America" like having a family outing at a mass retailer while everyone is scrambling to grab half-off appliances like their lives depend on it. These are the brightly dressed folk attempting to maneuver through the panic as a nuclear family unit, without losing little Billy in the ruckus.

While mommy and daddy are debating over which big screen is the best deal and which will actually fit in the living room, these little tykes will be swarming the store unsupervised. You'll attempt to not stumble over them, but they weasel in and out of aisles like the Black Friday Hunger Games overseers really wanted to make you work for it. They'll be holding onto the last half-off JamStik with their sticky little hands, just because they can, and you'll be debating whether or not it's ethical to snatch it away from them.

13. Those who won't be partaking again next year

As you finally lumber back out into the daylight, arms weighed down by shopping bags, you'll pass the victims of Black Friday. They've survived the big day, but you can tell from their vacant stare of abandoned hope that they won't ever be subjecting themselves to it again. Slouching at the periphery of the war zone that is Black Friday sales, they look as if they've just awoken from a bad dream, and will have trouble sleeping for days.

More like this
My Honest Review Of The Windmill AC
By Melanie Mignucci
20 Genius Kitchen Storage Solutions For Decluttering Your Space
By Emma Garza
Is The Insta-Famous Always Pan Actually Worth It?
By Jessica Goodman
Poshmark Vs. Depop: How The Reselling Apps Compare
By Emma Carey
Get Even More From Bustle — Sign Up For The Newsletter