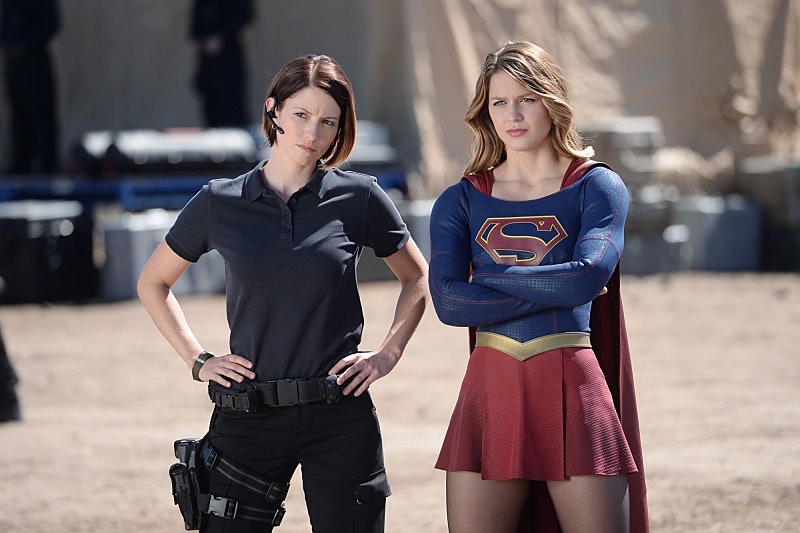 Monday's episode of Supergirl truly committed to the Thanksgiving theme, right down to the family drama. They really squeezed the juice out of that turkey, as Cat Grant would say. However, it wouldn't be a superhero series without introducing a family mystery or two in between helpings of chocolate pecan pie — what happened to Jeremiah Danvers on Supergirl ? The DEO is getting less trustworthy by the minute.

In a flashback, we learned that Dr. Danvers, Alex's father, volunteered to work for the DEO and share his Kryptonian knowledge with the organization so that they would leave Kara Zor-El alone while she was still a teenager. "I know everything there is to know about Superman," he said, which coming from Dean Cain is a hilarious joke (he played Clark Kent/Superman in The Adventures of Lois & Clark ). He left, and was killed some years later in an accident... or so we think. Eliza does not trust the information that was given to her, and warned her girls to be careful around Hank Henshaw.

This, of course, explains why Eliza Danvers has been so hard on her birth and foster daughters, and why she was did not approve of either Kara's decision to become a vigilante or Alex's decision to work for the DEO. Alex could sense that something was wrong the whole time, which seemed like a simple sibling rivalry until the secrets starting rolling out.

Unsurprisingly, Hank Henshaw hasn't aged a day between the flashbacks and present — he is probably a robot. At the end of the episode, the two sisters vowed to find out what happened to Jeremiah. I have so many questions. What is the Department of Extra-Normal Operations really after, if not to just monitor alien activity on Earth? Is Jeremiah Danvers still alive? Did the DEO kill him, or imprison him? Casting someone like Dean Cain, who is a household name in the Superman fandom, might be more than just a cute Easter Egg. The DEO has definitely had their eye on the Danvers family for quite some time, and Alex's bumbling dad could be the key to unlocking this shady mystery.

More like this
“The Door Is Always Open” For Another 'Breaking Bad' Spin-Off, Says AMC Boss
By El Hunt
Neil Patrick Harris Will Play 'Doctor Who's “Greatest Enemy” Yet
By El Hunt
Vanessa Hudgens Proves She's Always A Wildcat At This 'High School Musical' Location
By Alyssa Lapid
'Criminal Record' Is The 'Doctor Who' Reunion We’ve All Been Waiting For
By El Hunt
Get Even More From Bustle — Sign Up For The Newsletter