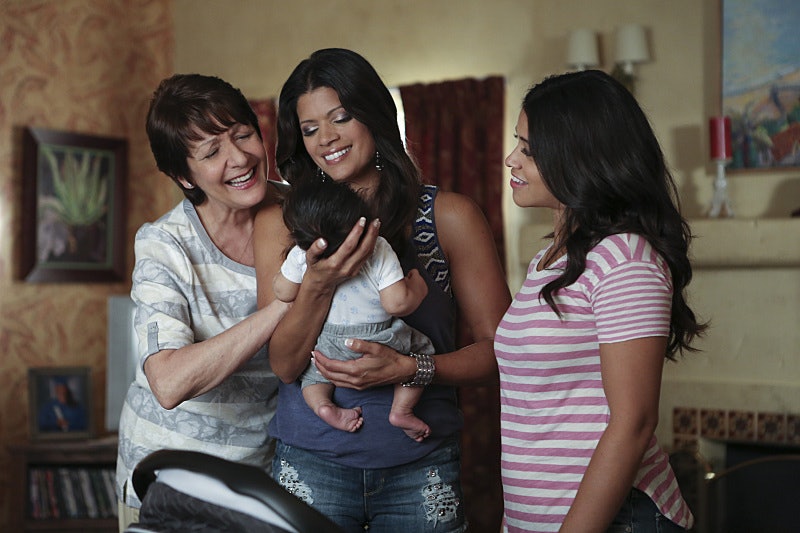 Money can be a very powerful thing. And while it's true that many of us were raised to believe that it isn't the most important thing in the world, we'd be lying to ourselves if we didn't admit that having it does make the world a whole lot easier. But just like any powerful thing that has the ability to help, it also wields the power to corrupt those who have more of it than others. Which is why I found it very interesting that Thursday night's episode of Jane the Virgin decided to tackle money issues face on and how it can be perceived as just as much of a hinderance as a helpful tool. It all started when Jane realized that Mateo stood to inherit quite a bit of money thanks to Rafael's impressive estate. How much you may ask? Oh, only a mere 40 million dollars, give or take. (Excuse me while I try and fail to hide my jealousy.)

However, Jane doesn't exactly view this realization as a completely positive thing. Of course, she wants Mateo to be well taken care of, but she also doesn't want him to become a spoiled trust fund baby. (Clearly, she has not seen Gossip Girl… or maybe she has and I have the wrong perspective on the show?) Regardless, she's worried that being rich could change her child in ways that she's uncomfortable with. (Though, if you ask me, Mateo looked pretty adorable while making it rain in her fantasy vision.)

She even considered arranging for it so that a majority of the money would only be given to Mateo by the time he's 50 years old. However, Rafael countered her argument by saying that he doesn't need to starve in order to be a good person. This may not be the way she was raised and yes, Rafael didn't have the greatest childhood experience, but according to him, that wasn't because of money. It was because he had a screwed up family. Which is why he's been trying so hard to make their family work.

But instead of Jane just having to accept the fact that Mateo is rich, they decided to make a very inspiring compromise: Mateo's trust fund will be attached to a charity. So for every dollar he gets, another dollar has to go to a charitable cause. I mean, how great of an idea is that? I can't think of a better way to help keep Mateo grounded while also allowing him to enjoy all of the opportunities life has to offer.