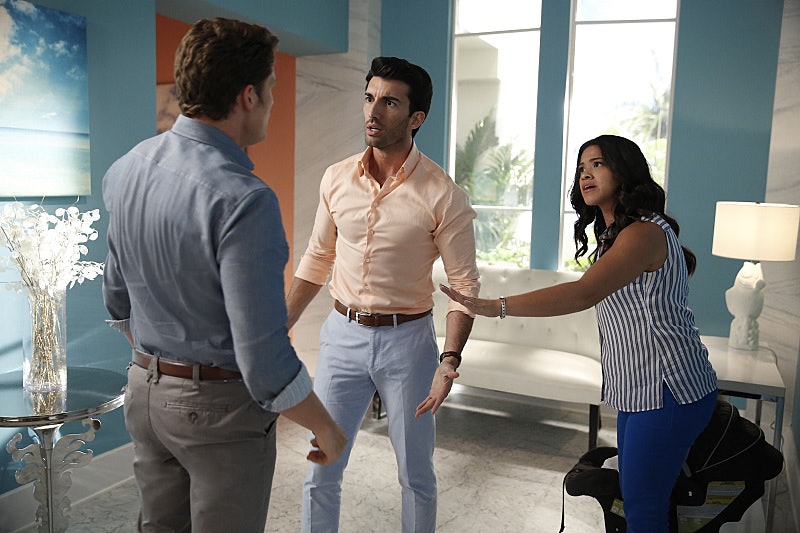 I'm just going to come right out and say it. This was not a great week for Michael on Jane the Virgin . First, we pretty much ruined his chances with Jane and then he went and got himself fired just before getting abducted by Nadine. So yeah, we might as well start calling him Alexander because that really is a terrible, horrible, no good, very bad day. But I'd be lying if I said I wasn't more concerned about his relationship with Jane than I am about his whole kidnapping thing. (He's a good cop, I'm sure he'll be fine.) His chances with Jane, on the other hand, have now reached an all-time low and it's all thanks to a fight that broke out between Michael and Rafael.

Apart of me can't blame her initial reaction to end things, especially since their fight got Mateo injured in the process. And Michael definitely has some anger issues to work out in general when it comes to Rafael (who surprisingly turned out to be completely innocent in all this). But then there's another part of me that continues to be frustrated with this roller coaster ride of a storyline. Why should Jane have to choose either guy right now? I mean, she just had a baby and this is a decision that will profoundly impact so many different lives. Doesn't she owe it to herself to explore her feelings regardless of how long it takes?

I may not be a parent, but I can appreciate the sentiment of wanting to put your child first above everything else. That's an admirable goal to live by. But that doesn't mean your own wants and needs have to completely fall by the wayside in the process. Mateo is still too young to know anything about this complex love triangle, so I'm not sure why Jane feels the need to rush in (and out) of things so quickly. If one of the guys doesn't want to be patient and stick around for her to piece together where her heart truly lies, then that person simply doesn't deserve her love.

Either way, I'm much rather see Jane take her time and see where her feelings lead her. It's unfortunate to see Michael suffer such a big setback like this, especially since Jane just told him that they can never work as a couple. But that doesn't mean she should totally write him off. We all know that Rafael has his fair share of flaws as well and Michael was decent enough to come clean about his mistake once he realized what he had done.

Jane just needs to start looking out for Jane. And once she stops thinking about who she should choose, that's when the decision will become all the more clear.