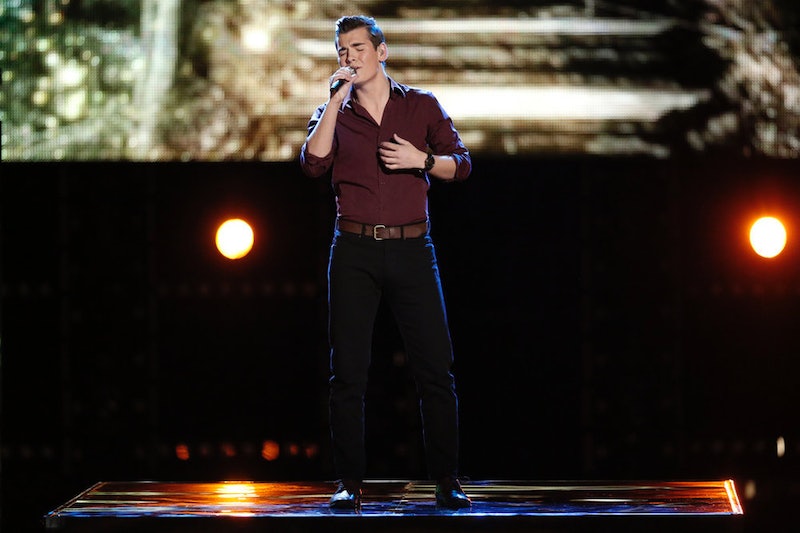 Every season of The Voice needs a heartthrob and season 9 has found its in 17-year-old Zach Seabaugh. The well-coiffed cutie took the Top 12 stage with a lesser known Elvis song, "My Love," and charmed the crowd into a standing ovation. Seabaugh has proved week after week that he has all the makings to become country's next hottie, but does he have what it takes to win The Voice title? Let's look at the facts.

Seabaugh has proven week after week that, although he's a country artist by nature, he's pretty versatile. His performance tonight showed no signs of country and was still a very solid showing. It was even a break away from the typical fast-paced, theatrical performances he's known to be so good at. Slower, more emotional performances like this are the true test of whether or not an artist can succeed in the music industry, and Seabaugh passed with flying colors.

His versatility paired with his school-boy charm and solid talent are enough for him to make it far in this competition, but are they enough to win? Most likely not. If this were any other season he may have a better chance, but Seabaugh is up against some crazy talented artists. While his charm will certainly win over the audience, it's not enough to overpower the strong, emotional vocals of Jordan Smith, this season's front-runner (let's be honest, can anyone beat this guy?!). Even if you take Smith out of the equation, Seabaugh has pretty tough competition for the country vote in his own teammates, Emily Ann Roberts and Barrett Baber. He's going to have to pull out all the stops — and possibly pray for a miracle — if he really wants to win this thing.

Despite these challenges, Seabaugh certainly has a fighting chance. And with Blake Shelton as a coach, he'll definitely gain the skills he needs to be successful. Whether or not Seabaugh makes it to the end, I can guarantee he'll go on to have a very successful career in the country world.