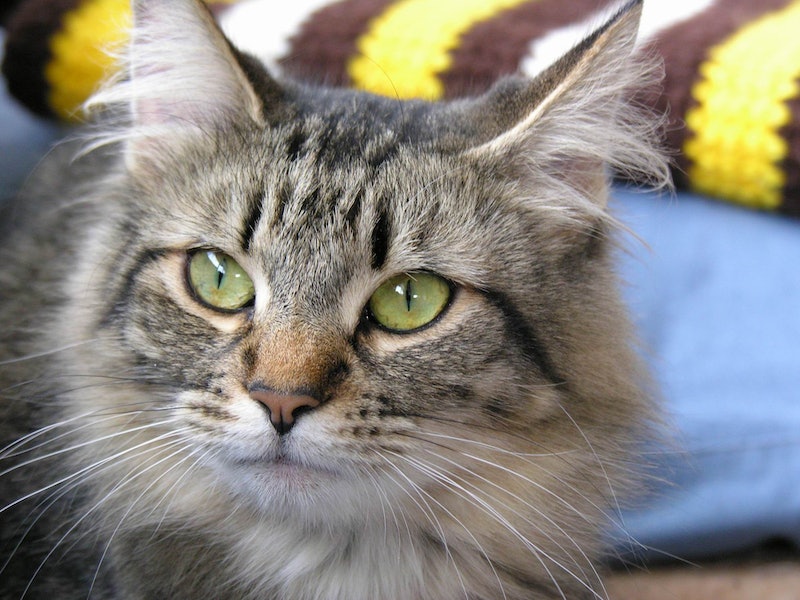 It's become clear that the attacks in Paris on Friday were perpetrated by terrorists affiliated with ISIS. And as the world works to stop the extremist group, one man has had a few days to figure out just exactly what he wants to say. The Late Show's Stephen Colbert found out about the attacks at the tail end of taping his show Friday, and reportedly re-taped a segment to offer his condolences to the country as events were still unfolding. He then had all weekend to think on it, and during Monday's opening monologue, Colbert called ISIS a "bunch of pussies."

While John Oliver went the rant route to say "fuck these assholes" for "working in service of an ideology of pure assholery" on Last Week Tonight, Colbert's remarks felt much more heartfelt and personal. The attacks have had a visible impact on the late-night host, and The Late Show pulled out all the stops to show that it stood by France during this time of crisis. The opening credits sequence, which normally takes the viewer through the New York skyline, were remade to highlight French landmarks. In-house band Stay Human played France's national anthem "La Marseillaise" to open the show. And the entire studio was cast in the country's national colors of blue, white, and red.

Colbert began by expressing his condolences for Paris, remembering the last time New York City was the target of terrorism:

"I wanted to start my show tonight by once again offering our thoughts and prayers to the people of Paris. New York is a city that sadly knows too well the horror the French experienced on Friday. And we also know there are no words that can reach the depth of their grief and their shock, but we stand with the people of France as a friend, and an ally, and offer a hope that there is a way through the unspeakable tragedy."

Colbert then thanked France for its long friendship with America. The truth is, there's a lot of history between the two countries. (Hello, Louisiana Purchase!):

And also let’s take the opportunity to thank France for what they’ve done for us. They’ve given the United States so much over the years: aid to General Washington in our fight for independence, key intelligence on how to put potatoes in boiling oil, my favorite way of kissing, half the continent at a bargain price — no take-backs, guys! — and most of all, France gave America our enduring symbol of freedom.

Thank you, France, for Lady Liberty.

Because we have used that freedom to make foam versions of it for drunk people to wear on New Year’s Eve. And today, in a tribute to its mother country, Lady Liberty offered ISIS a fitting gesture, long may it wave.

Middle fingers up, guys. Colbert then laid down the point of his message: that any sign of support for France is a good thing.

In fact, all over the world this weekend, there were displays of support of the French. The Sydney Opera House. Rio’s Christ the Redeemer. And the Paris Las Vegas hotel dimmed their Eiffel Tower lights.

Now, some might say these gestures don’t actually do anything, but I disagree. People are trying to find any way they can to show support, however small, to the people of France. For instance, Twitter was deluged with statements of support, from the hashtag #PrayForParis to messages like ‘In support of what is happening in Paris, my wife and I are watching Ratatouille.’ And ‘Watching Ratatouille to honor all the citizens of Paris.’ Is that wrong? No. Is Ratatouille a French film? No. Is it a valid expression? Absolutely. Because watching a cartoon Parisian rat make soup is certainly as valid as anything I will say tonight, I promise you that.

With all this discussion of prayers and Facebook profiles, it was refreshing to hear Colbert come to the defense of people who wanted to show their love for France in any way that they could — even if that only meant watching a certain Disney movie about a chef rat. So go on with your bad self, and do whatever makes you feel one with the French.

So to everybody: If it makes you feel a connection to the people of Paris, go drink a bottle of Bordeaux. Eat a croissant at Au Bon Pain. Slap on a beret and smoke a cigarette like this. Go eat some French fries, which I am now calling 'Freedom Fries' in honor of the French people. Because anything that is an attempt at human connection in the world right now is positive.

And finally, Colbert revealed the one thing that ISIS and cats have in common:

We asked ourselves, ‘Is tonight an appropriate time for Acro Cats?’ And then we asked a bigger question: ‘Is there ever an appropriate time for Acro Cats?’ No, there is not. So we said, ‘Absolutely, let’s have them on.’ Because I’ll tell you what, I don’t think ISIS would like Acro Cats. I don’t. They’re cute and they’re silly, two things ISIS hates. In fact, the only thing they have in common is that they’re a bunch of pussies.

I do think that that's a bit of a generous comparison, because hey, cats are cute and ISIS is responsible for some pretty horrific shit over the years. But thank you, Colbert, for not only calling out the terrorist organization for being the biggest cowards in the world, but for encouraging us to show our support for France in any way we can.

Check out Colbert's full monologue below.