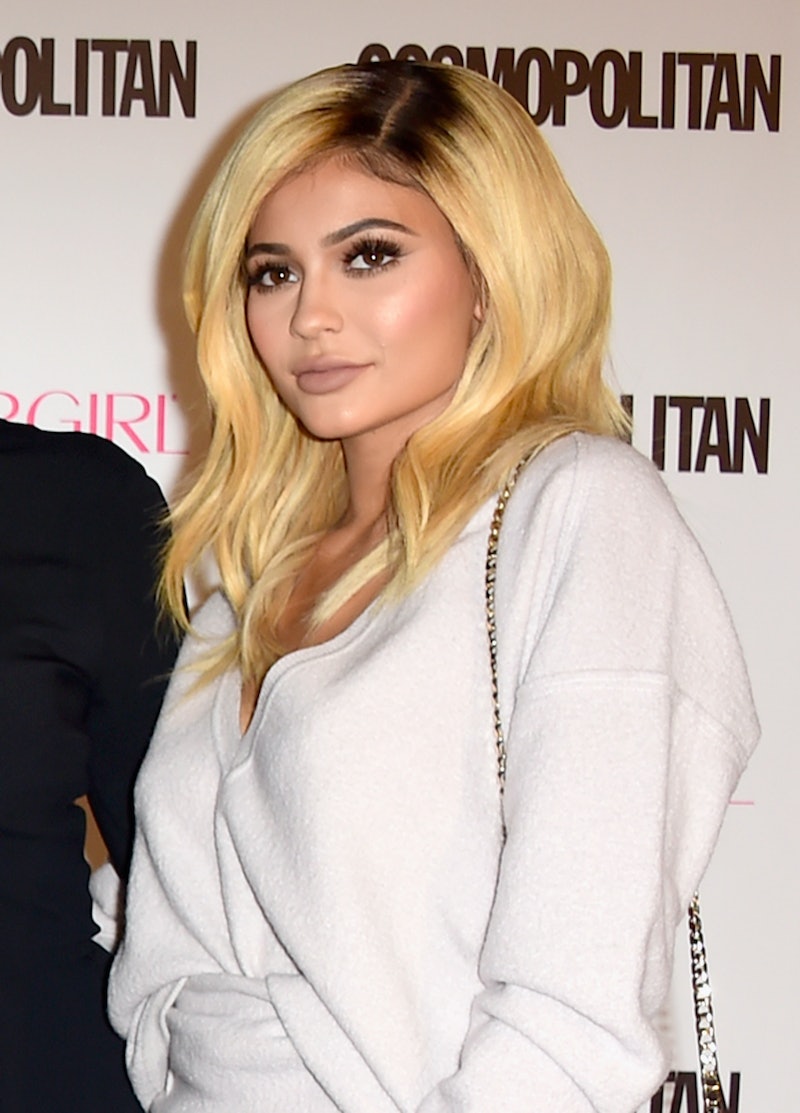 And the covers keep on coming for the most popular Kardashian family member. Kylie Jenner has blonde hair on her ELLE Canada cover, immortalizing the temporary hue. Jenner wasn't a blonde for long, quickly returning to her familiar black locks after a quick couple of moments as a golden girl. This December 2015 cover is a permanent reminder of the brief time that Jenner went blonde.

Fans were able to vote for one of two covers — an in-color image featuring Jenner in a sparkly pantsuit or this black and white shot, which was equally sparkly and appears to have won the battle.

Jenner wore a blingy bodysuit, with fringe that mimicked a skirt. It was a skater-like dress and looked like what Beyonce or Ariana Grande wear while performing. This particular style is a perfect mix of sexy and utilitarian and it's the epitome of "glamsual." While Jenner was posing for a cover and not, you know, performing while wearing it, she looked ready to launch her pop music career.

You know what else this cover reminded us of? Oh, just her big sister Kim Kardashian's cupcake-loving ELLE UK cover from this past January. Kylie is often considered Kim's doppelgänger and their international ELLE covers prove that point.

This is Jenner at her most glamsual, with her sexy, tassled mini, the over-the-knee boots, her pouty lips, and her golden locks. Doesn't she look like the hottest pop star working today? The presentation is very pop diva, thanks to that bodysuit.

Kardashian also rocked glamsual ensemble with some fringe factored into the top! Her high-waisted boy shorts were bangin'. This is yet another case where these two sisters shared an aesthetic. This time, it was for a mag cover.

Jenner's ELLE cover outfit is of the same silhouette as Grande's performance ensembles.

It's also of the same spirt as what Beyonce wears when she takes the stage. It has to be memorable and move with her.

Jenner's February 2015 Cosmo cover was another glamsual moment, where she paired jeans and a tank with a glittery top and granny gray highlights.

The Kardashian family "Kosmo" cover offered a more familiar version of the youngest Jenner sister. She was glamsual again, with thick, lush hair and a crisp white shirt.