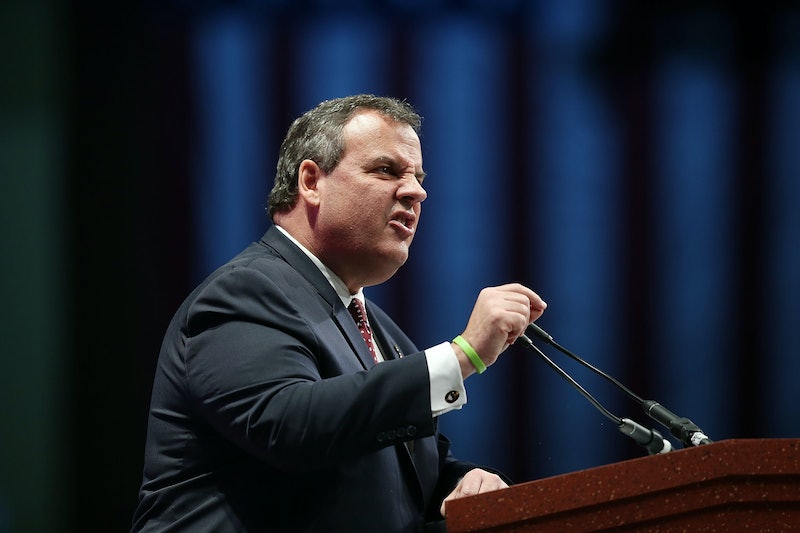 The loud ruckus heard across the country Monday from governors protesting the arrival of future Syrian refugees in their states may all be for naught. Following the Paris attacks on Nov. 13, as many as 26 governors (all but one of them Republican) have said that they do not want to resettle Syrian refugees, due to security concerns. Their announcements stemmed from the cold to the ridiculous. New Jersey Governor Chris Christie even said that his state wouldn't take orphans under five. But as it turns out, governors don't actually have a say in the matter.

Immigration experts have said that states don't have the authority to block their borders to anyone, although uncooperative state agencies can make the resettlement process much more difficult. Experts on migration point to the 1980 Refugee Act, which gives the federal government the power to place refugees anywhere in the country.

Stephen Vladeck, an American University law professor, told CNN that states have no authority because "the question of who should be allowed in this country is one that the Constitution commits to the federal government." He did say, however, that states can cut their own funding to their hearts' content. Some states provide special services to immigrant communities, such as translation and interpretive services, which can make integrating newcomers easier.

President Obama criticized these governors while speaking to reporters at the G-20 summit Monday: "Slamming the door in their faces would be a betrayal of our values." He said that some Republicans speaking out against Syrians had themselves come to the U.S. from other countries. He didn't call out anyone by name, but Senator Ted Cruz, for example, was born in Canada, and his father fled Cuba for the United States. Obama also said that taking only Christians and not Muslims, as Cruz and former Florida Governor Jeb Bush have advocated, is "not who we are."

Concerns about Syrian refugees stemmed from the discovery that one of the Paris suicide bombers was carrying a fake Syrian passport. Ahmad Almohammad, as he was identified by the passport, was one of the attackers at France's national stadium. He arrived in Greece on a boat in October with 198 refugees.

Syrian refugees to the United States, however, don't arrive in massive waves like they do in Europe. Most have been living in camps and then apply for asylum through the United Nations High Commission for Refugees, which then refers them to the United States. They then go through a vetting process.

The security checks that refugees must go under are the "most stringent security process for anyone entering the United States," Deputy State Department spokesman Mark Toner told CNN. Many agencies, including the Department of Homeland Security, the Defense Department, and the FBI, all play a role. That said, because the United States has no embassy in Syria, it's sometimes it is difficult to get information.

The United States has accepted 1,854 Syrian refugees since 2012. They have been placed in 130 towns and cities, many of them in Texas, Illinois, and Michigan. More than 150,000 Syrians already live in the country, and refugees are placed in areas with existing immigrant communities, and with family if possible. The government works with nine volunteer agencies to make this happen.

This number pales in comparison to Germany, which has admitted nearly 93,000 Syrians during the same time period. Under pressure from Europe, President Obama raised the quota for Syrian refugees to 10,000 this year. Every year, the United States resettles 70,000 refugees. Last year, more came from Myanmar, Iraq, Somalia, the Democratic Republic of Congo, Bhutan, and Iran than from Syria.

Even if these governors were to get their way and no Syrian refugees were settled in their states, there would be nothing stopping them from moving later. Refugees are legal residents, and can travel freely within the country. These governors need to start working to make new arrivals more welcome, because they have no power to stop them.

More like this
5 Ways To Stand In Solidarity With Women In America From The UK
By Sophie McEvoy
How To Fight For Reproductive Rights, Based On How Much Time You Have
By Courtney Young
Boris Johnson’s Leadership Is In Question – Again
By Bustle UK
For These Abortion Clinic Volunteers, Going TikTok Viral Is A Risk Worth Taking
By Audra Heinrichs
Get Even More From Bustle — Sign Up For The Newsletter