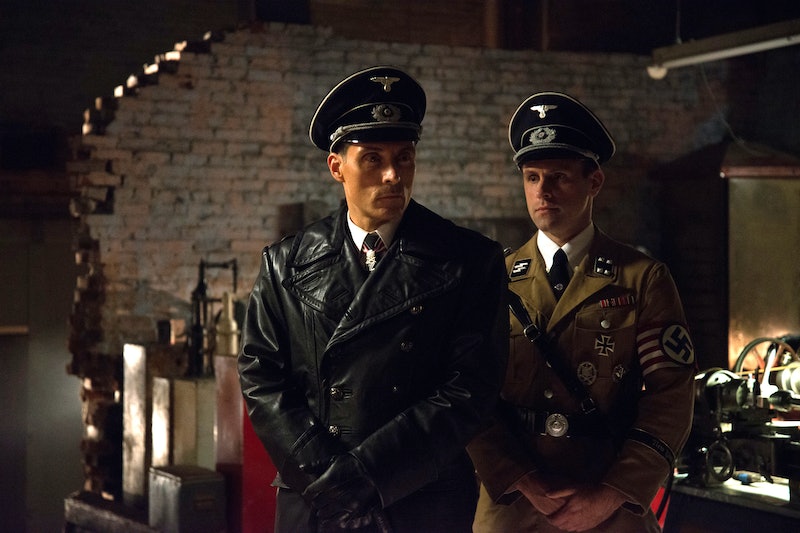 The newest series from Amazon, The Man in the High Castle, offers a fascinating retelling of history — where the victors of WWII were the Axis powers, leaving the U.S. to be taken over by Germany and Japan. And how The Man in the High Castle compares to the book it's based on, written by sci-fi master Philip K. Dick, is equally fascinating. The show, which premiered its first season in its entirety on Amazon on Nov. 20, and the novel share the same name (a rarity for a Dick adaptation), but as with taking any book to the screen, changes were made to adjust the flow of the storytelling for TV. As executive producer Ridley Scott told Entertainment Weekly, "It's a hell of a book to break down. There are about 19 stories in the first 20 pages. How do you make that work?"

Dick's writing has been the inspiration for the movies Blade Runner (directed by Scott), Total Recall, Minority Report, and The Adjustment Bureau, among others. Those adaptations may not have been exact replicas (or replicants) of Dick's work, but the outcomes were still quite watchable. And if you've never read the 1962 book, you can easily still enjoy the 10-episode Season 1 of the Amazon series. Plus, the show greatly benefits from having a longer run-time than film adaptations of Dick's work.

Showrunner Frank Spotnitz told Entertainment Weekly, "We depart from the novel, but we only did it to try to be more faithful to the ideas, to try and find ways to dramatize them more clearly." But even with the deviations from the book, the show has an important supporter from Dick's family — his daughter Isa Dick Hackett, who serves as executive producer of the Amazon show. At The Man in the High Castle panel at San Diego's Comic-Con, Dick Hackett said, "I would hope he loves [the show] as much as I do."

Since Dick died in 1982, he won't be able to give his own input on how the show adapts his complex novel, but here are seven of the major ways the show stays true — and then strays — from its source material. Spoilers from the first two episodes and the novel follow.

From the opening credits with a creepy rendition of "Edelweiss" playing over a map of the newly divided U.S., the viewer is cued into the fact that the world portrayed in The Man in the High Castle is different from the world Americans know today. The book and the show both take place in 1962, in a world where the Axis powers defeated the Allies in WWII. If Nazi symbolism makes you uncomfortable (as it most definitely should), be warned that there are swastikas all over the Amazon show (for instance, the American flag's stars have been replaced by a swastika). Like the book, the Nazis have taken over the East coast, but unlike the book, on the series there is plenty of action in New York City. Yet the setting of New York in the show lends itself to a frightening swastika symbol looming over Times Square.

As with the novel, there are three major plots happening in the TV series: The spy Mr. Baynes meeting with Japanese official Nobusuke Tagomi; Frank Frink being a talented artist who wants to develop modern art and jewelry (he does so in the book) with his friend Ed; and Juliana and Joe in the neutral territory of the states being involved with the subversive The Grasshopper Lies Heavy. Juliana and Joe's plot appears to be the main focus of the TV series, which doesn't exactly fit with the novel, but it's got romance and a Nazi spy, so it's hardly surprising that their story is taking center stage. Plus, the name of the series and book comes from person who created The Grasshopper Lies Heavy, who goes by none other than the alias "The Man in the High Castle."

In Dick's novel, the characters read the novel-within-a-novel called The Grasshopper Lies Heavy, which offers an alternate history where the Axis powers were defeated (so like the world we live in today). In the show, this book is now a much sought after film reel, depicting realistic looking news footage of an America free of Nazis. This edit is the most obvious change from the source material, and Spotnitz said at Comic-Con, "That was actually the first thing that popped in my mind when adapting it for television, which was that instead of a book, it should be a film — because it’s a visual medium."

In the first episode of the TV show, we are introduced to Juliana in San Francisco, who is engaged to Frank. In the book, Juliana and Frank are actually divorced, with Juliana already living in the neutral Canon City, Colorado (where she ends up traveling in the first episode). And if you sensed the obvious sexual tension between Joe and Juliana in the two released episodes of the show, you aren't wrong that there's a highly likely chance that those two will get it on since Juliana and Joe (whose last name is Cinnadella in the book, not Blake) do have a sexual relationship in Dick's novel. In the book, there's no moral complication of Juliana being a devoted fiancée though. (And it should be noted that Frank is of Jewish descent in both the novel and show.)

I am never one to complain when Rufus Sewell shows up in a show or movie, but the British actor's menacing Obergruppenführer John Smith was not a character from the book. His addition is justified, as Sewell said at Comic-Con, by the fact that Smith "represents the great majority [of Americans who] have just normalized. It’s become normal life, under the Reich." Another smaller added character is that of Juliana's half-sister Trudy, who was introduced by Spotnitz to help set up Juliana as the protagonist of the series, he told TV Fanatic. "Because it’s such a male world, I thought that it was really important that the woman be at the center of it and obviously, [Juliana's] an important character from the novel as well." Besides characters being added, some important characters from the novel (like antique shopkeeper Robert Childan) have yet to appear in the first two episodes of the series. But with eight more episodes to go — and Robert being a character listed on IMDb — I wouldn't get too concerned about missing characters just yet.

When Juliana first appears on screen, she's practicing the martial art of Aikido. In the novel, it's Judo. Though Judo and Aikido are similar practices and the difference could be viewed as just an oversight by the series, Spotnitz is aware of the edit. He told TV Fanatic, "in the novel it’s Judo, in the series it’s Aikido." Though a tiny change that will most likely not affect the plot, you better believe that Juliana's Aikido skills will come in handy later in the series if she's anything like her Judo-practicing novel counterpart.

The character Tagomi mentions consulting the Oracle, or the I Ching. This stays true to Dick's novel as the I Ching is used by Tagomi to look to the future, but one difference is that Juliana and Frank also use the I Ching (which hasn't been something shown on the series yet). The I Ching is a real book from China that uses hexagrams, which matches what Tagomi said in the first episode about consulting the Oracle and getting the 29th Hexagram, meaning "Darkness. Pay attention." (The 29th Hexagram is also a pretty good message for watching the ominous series.)

While the changes Spotnitz and his team have made from the book aren't too radical, the most interesting reveal is yet to come. Spotnitz spoke to Den of Geek about the issues of developing Dick's novel into a series, saying, "The challenge is to honor how complex and interesting the ideas of the book are. What we’ve done I think is reorganized the narrative for television because it’s a short book and we want this to be a big canvas for a long time." And with this big canvas, viewers will have to see how the series reveals it's major secret — just who "The Man in the High Castle" is — and if it will match Dick's story.